This topic has been deleted. Only users with topic management privileges can see it.
last edited by
0
D
Dragon_Slayer

I was in a 1v1 earlier and the random map that was generated had a large amount of reclaim below a cliff. I tried to reach it in-game, but couldn't. I then lost and my opponent somehow had much more than I thought he could have possibly had, so I watched the replay and he had managed to reach the reclaim below the cliff over the cliff, which let him reclaim it early and thus gain a huge early advantage. When I tried to reclaim I just used standard reclaim orders, which didn't work. When I checked the replay he use factory attack move commands which everyone knows has longer range, so I thought that that was my mistake. That I would have reached the reclaim if I had just used attack move from factory.

So then I went into a practice game with the map to check if it all worked, and on my bottom right side I just could not get it to work no matter what I tried, I couldn't get the engies to reclaim over the cliff. So then I went and got a transport to check his top left side, and it worked. So it wasn't that I was somehow doing something wrong, it was that the map was rigged against me even though it is supposed to be symmetrical. 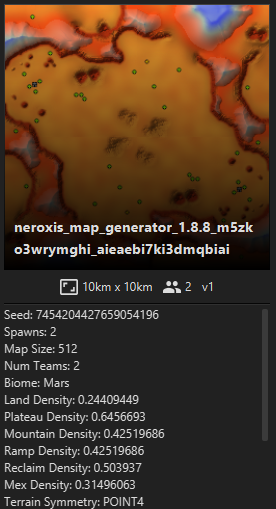 If anyone can get the engies to reclaim over the cliff on the bottom right that would be surprising.

And to be clear this was game deciding, if he hadn't gotten that extra mass so early I would have killed him with T1 spam.
Replay ID for anyone interested in the actual game: https://replay.faforever.com/18535454

I was able to reclaim both salems using attack factory move https://replay.faforever.com/18536443

The reason it didn't work in your test game is because your mass bar was full when you tried to attack move reclaim the bottom right. And engies won't reclaim on attack move or patrol when the mass bar is too full