I think there are people who would appreciate both styles of maps.

The larger, more realistic maps allow a person who's playing single player or maybe Co-Op to become immersed and create a narrative on their own during the course of the battle. Perhaps positions that are at a disadvantage from the start, so that can challenge is created just by the terrain.

And there is definitely a need for balance maps to be used for, let's call it "competitive" play. These are basically chess boards.

. As I've said before - I don't think this is a trade off. You can have both - pretty and competitive! We'll see what the future brings - more experimentation!

Edit: and soon an update to the templates that Svenni and me make available - including albedo decals!

@nine2 I found out what caused all the river delta's - it was the global intensifier that simulates long intensive erosion. It also introduced a ton of artifacts, glad to have it out! Instead I now use channeled erosion (erosion on top of erosion) that generates better, less river-delta-isch results. I'll have a screenshot (of another map) in a hour of that

edit, terrain with (above) and without (below)

After more inspection it is not perfect yet - but neither is the input heightmap. I think there is only so much I can achieve with a poor heightmap as input.

I think the erosion may need a mask to not erode or erode less on flat area's - those appear to be buggy. I'm trying to counteract it by adding a bit of noise everywhere, but to no avail at times

is the top screenshot the new erosion style? in which case i love it

Yes it is - I'm still experimenting with it but that is the idea :). The pipeline is quite different:

This is a similar approach to how models have their normals 'baked' into - you start with a high-res mesh, you then make a low-res mesh and bake in the details of the high-res mesh. In turn, the smaller details come out quite nicely and I can actually create sharp ridges because the normal resolution is 8x (at 20x20) the heightmap resolution!

The image above doesn't have (yet):

Edit: to show off why the normal map is so important:

Literally all the detail is in the normal map. Accidentally did this by moving the decal. @biass I just accidentally found out how to make pretty normal maps

@nine2 I got it just right now

Edit: after inspecting, there are still a few artifacts. But a lot less visible than the previous set of artifacts.

This is in the GPG editor

! It doesn't use any stratum layers yet so there is still loads to gain.

I discovered what caused the artifacts: terrain that is too 'perfect' or 'smooth' causes the sediment to pile up. The piled up sediment causes artifacts. 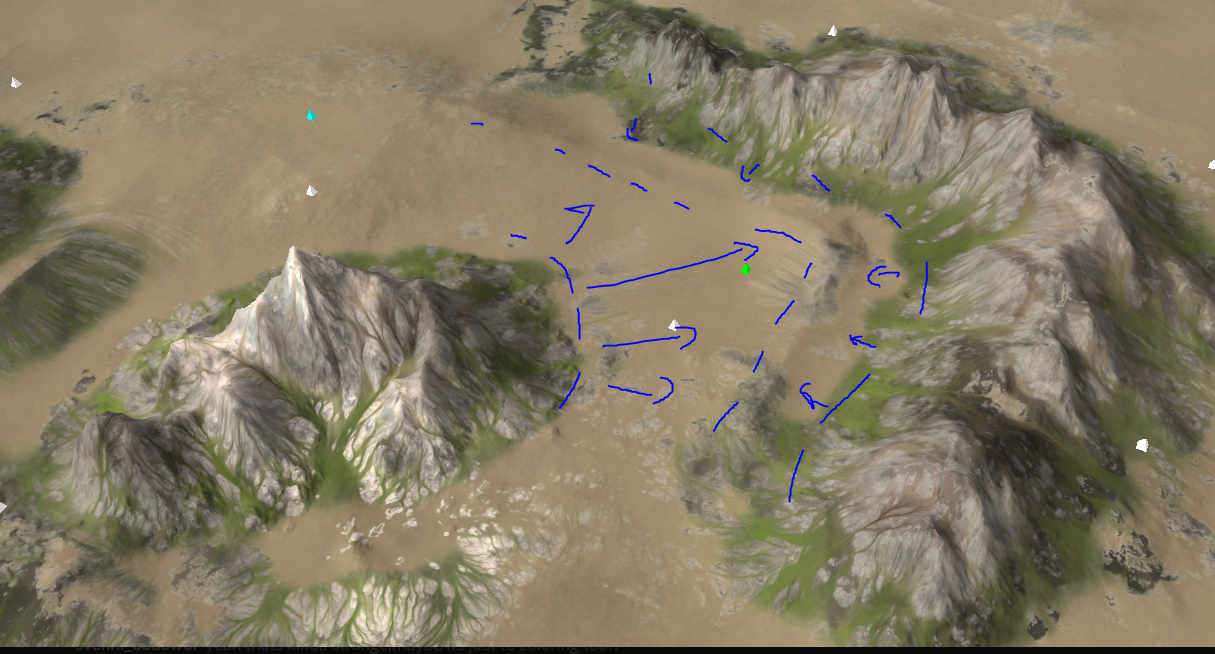 I think the boundaries straight-line are some artifact from how the erosion splits up the terrain into blocks, allowing it to run on multiple threads. But that is just a guess. 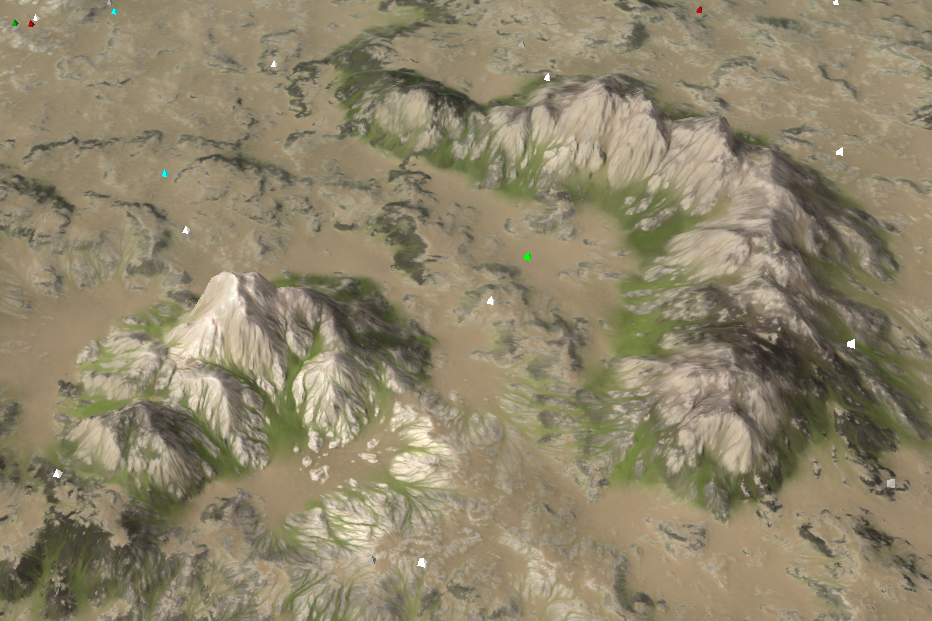 The same location, but now without those artifacts

It's hard to believe this is supreme commander! The mapping revolution has begun.

@nine2 the river delta's are back but that is not the point - I'm trying to incorporate the idea of visual cues that you mentioned. I've just figured out how to make the decal stop suddenly without it looking strange, clearly indication that a piece of terrain can be considered flat from that point onwards

. It is done via applying masks at the right places before and after eroding.

I've also been experimenting with allowing a stratum layer to 'leak through' so that there is detail up close. As an example the dotted circles have a stratum layer just slightly going through, where as the completed circles do not. The different is a significant boost in detail when you're zoomed in.

It does provide more 'control' over the color of the decal, which is a double edged sword: it allows you to more easily tweak it but its harder to see the end result without having everything together in the GPG editor.

Without all the additional noise and at a lower resolution:

Clearly shows where the ramps are

Can you even call this FA anymore?

You've outdone yourself. How can I see this in a working map?

@nine2 it is still under production. For now, these images will have to suffice

Updated Pool of Entropy to version 3:

Springtime (the map shown a lot previously) is in a finishing state! The map was made for one of the developers of the LOUD community. It was a remake of 'Valley Passage' but then more aesthetically pleasing.

The map had a few goals in mind:

Therefore this map has a 'core' and an actual map file. The core file solely (ab)uses the ozone editor to construct the general layout and uses stratum masks to construct masks that can be used in World Machine.

A screenshot that is taken at roughly the same location, depicting the general layout

This is all fed into World Machine and then used in the actual map file. If anyone would want to 'move a mountain' later on then I'd change it in the core file, run it through the world machine template for this map and then update the actual map file accordingly. A large portion of the process is because of this procedural in a non-destructive manner.

Center of Tatsu is another map that I've been working on. It is the first design of this topic:

A screenshot that is taken at roughly the same location, depicting the general layout and a few stratum layers used for masks in World Machine and the according output

The aim of this map was to solidify the workflow. And solid it certainly became. I was able to completely remove Photoshop from the equation which is critical because Photoshop is both commercial and slow software. The workflow is more automated by the use of a script. The only reason I required Photoshop was to convert the files to the .dds format. As an alternative Image Magick is used for that in combination with a script:

This is only a snippet of the script. But essentially there is no more manual labour in converting the textures to the correct format / size. Now I can click and go - go get some coffee, talk to my neighbour, study a bit, end up at the toilet and then when I'm back all the textures produced by World Machine are converted and stored at the right locations.

On top of that it is significantly faster than Photoshop - converting an 8k texture could take up to an hour in Photoshop, where as it takes about a minute with Image Magick.

When developing the map I used 2k or 4k textures rendering the generating / conversion time to at most a minute, allowing me to quickly assess the results in the old GPG editor. By using the /EnableDiskWatch program argument the textures are automatically updated and therefore the results can be seen without restarting the editor.

Back again with an update on my first map: Auralian - The Core!

To get an idea, this is how the initial version looked like: 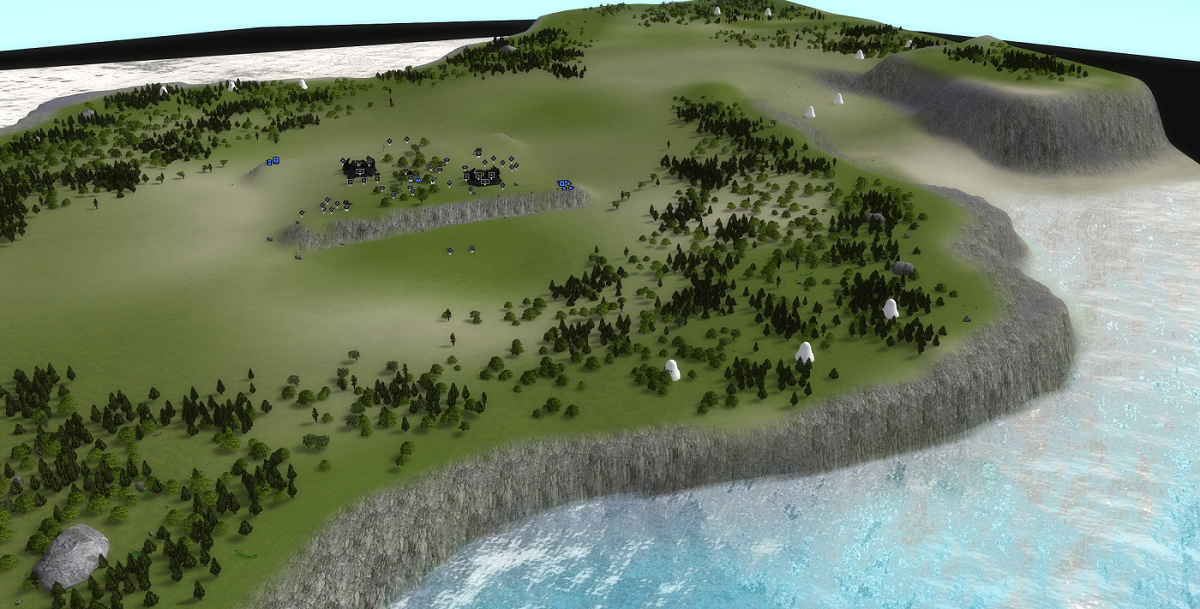 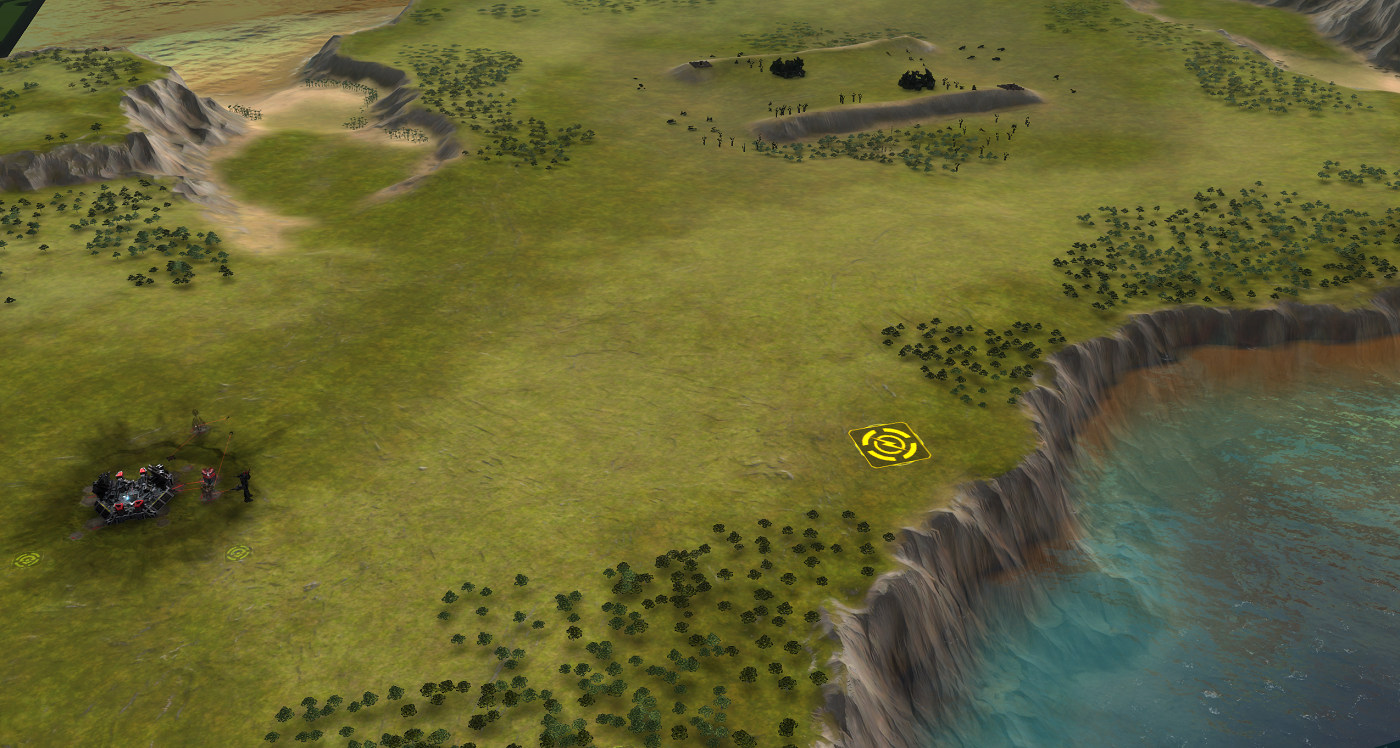 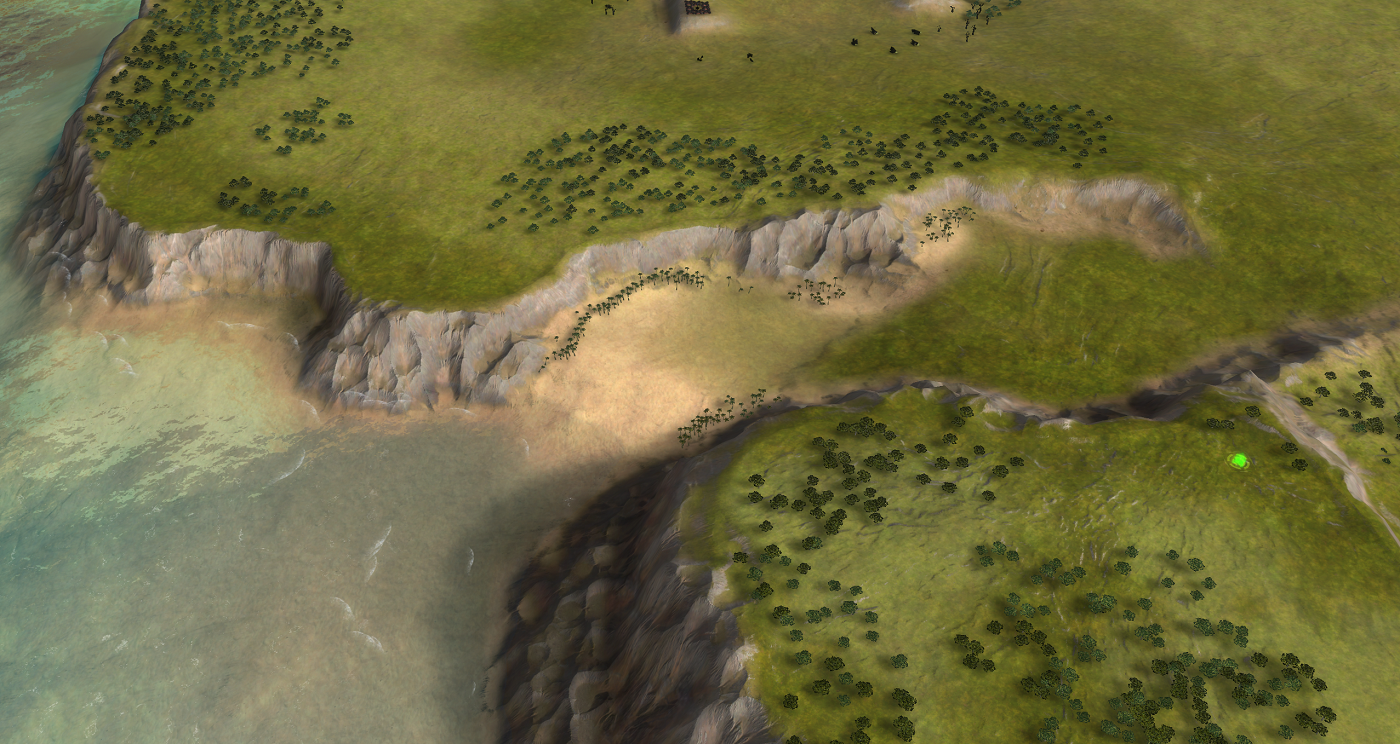 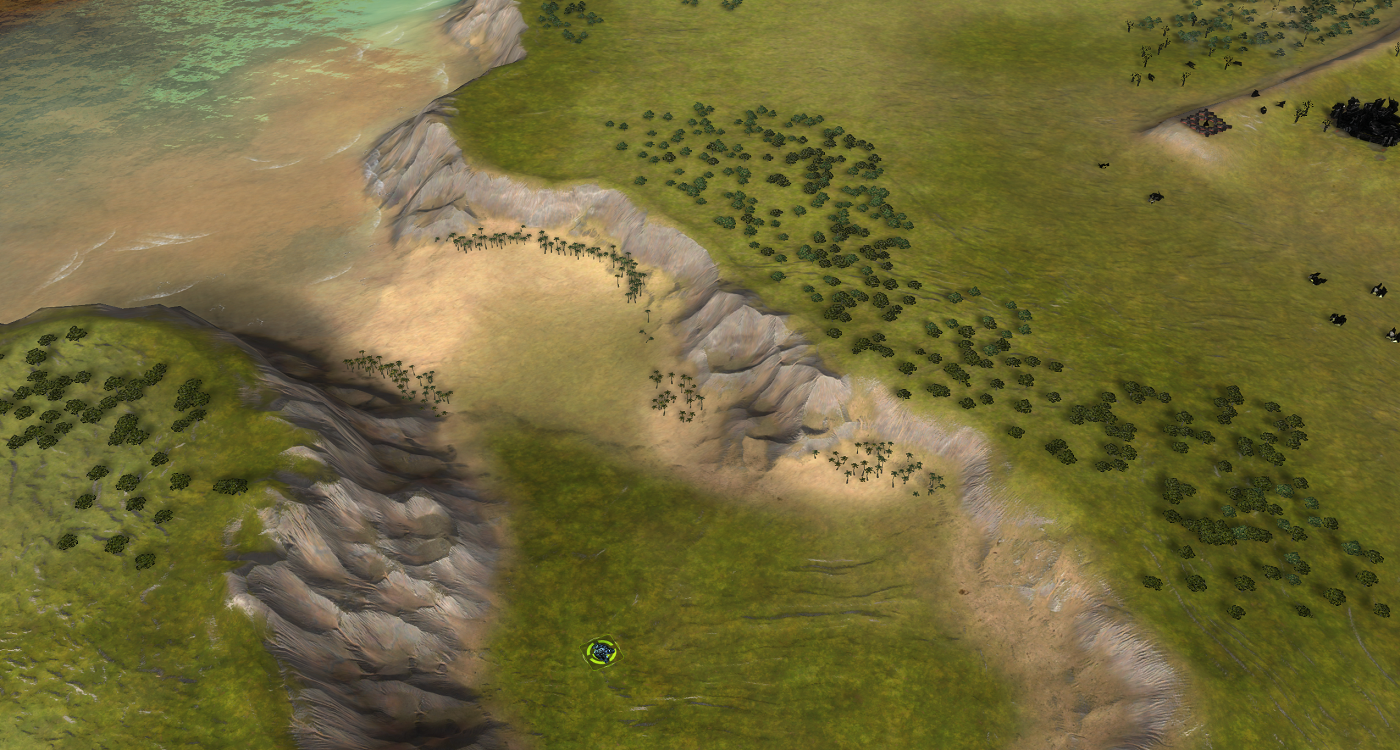 The aim was to learn and apply various techniques: 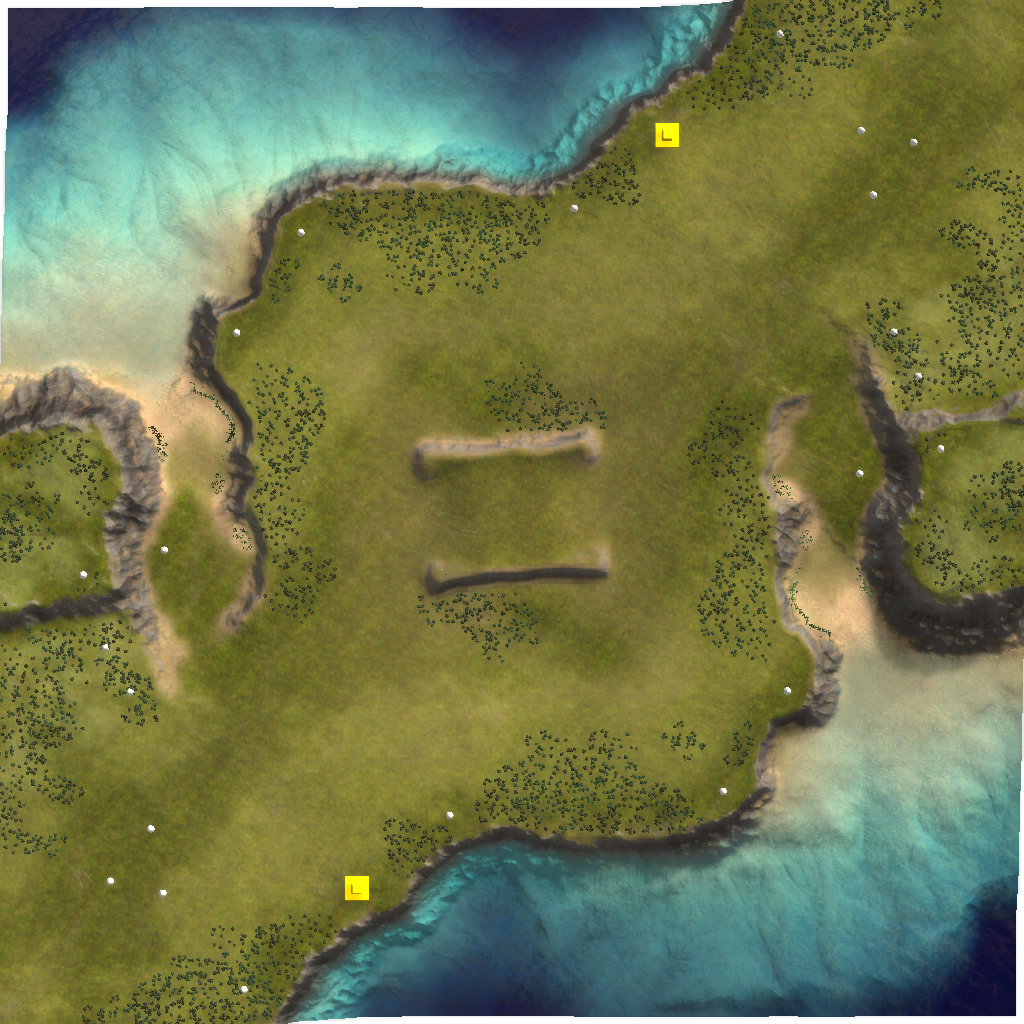 The map is by no means competitively interesting. But it can be a solid map for your first few games.