This topic has been deleted. Only users with topic management privileges can see it.
last edited by Chosen
0 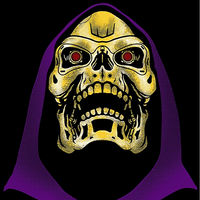 Finally i see who knows what he is trying to do. Nice work Jip but i don't think so it's a good idea to using a over +80Mb decals files over the map, also i don't think so that it's the correct way to make maps. Every time when unit's shoot the ground etc..... it will draw a new decal over your ''masked decal'', later or sooner the decals start blink..... and in worst case it will crash the game, other wise great work. Also some terrain fixes could fix these shadows in some area and gives a better picture while zooming

I understand what you are saying! I agree that 80mb decals may not be the approach to take - it is viable on a 5x5 map (20mb decals), experiment-worthy on a 10x10 but not applicable to 20x20 or larger maps.

About the decal blinking - that is only applicable once you reach the decal limit. This map has about ~100 decals on it. I only experience the blinking when I have 3000+ decals (Long John Silver gets pretty close). I'm not afraid of blinking! Svenni did found some bugs when you use the cheat window that can cause the map-wide decals to disappear. But that is a very niche situation and I'm okay with that

Some mountains do look indeed a tee-bit strange of the shadowing! At some point the experiment was over for me and therefore I did not fix that. The goal was to experiment with what you can achieve with such decals and I personally think it can be quite impressive if used wisely! I am not experimenting with local decals, e.g., generated specifically for this map but then only 2048x2048 resolution wise and only used in some area. Much like other decals are - but then specific to the map.

Thank you for your feedback!

Decal limit have nothing to do with blinking decals

You can also try to change the sun direction, power to fix that shadow issue

Then I'm not sure what you are talking about - do you have a replay or a video that shows the problem? Edit: then I can add in a note / disclaimer for the guides on map-wide decals

. For now I first want to setup the repository that holds the map along with the timelapse that shows the first ~6 hours of progress.

I'm not entirely sure what you are after - searched for replays, for the map itself, etc. Can't find it

Edit: the decals do blink slightly when I am in cam_Free mode - unusual angles are poorly taken care of by the engine.

A remaster of an old map made for a friend at that time - Mellow Shallows V11 is in the vault!

I'd love to hear your feedback on the aesthetics of the map. Make sure to add in your graphics settings as they can heavily influence how the map is perceived.

Edit: After making the screenshots I'd say the map is a tee-bit on the dark side

Hey Jip, I had a look. For starters its really cool to see some innovation after all of these years with new techniques applied to a 13 year old game. Overall I think the level of detail is fantastic but the variety in detail is not. To me I just see the same river-delta thing over and over with maybe the same crack thing over and over. It would be nice if we had this level of detail but with more diversity in appearance of "decals". 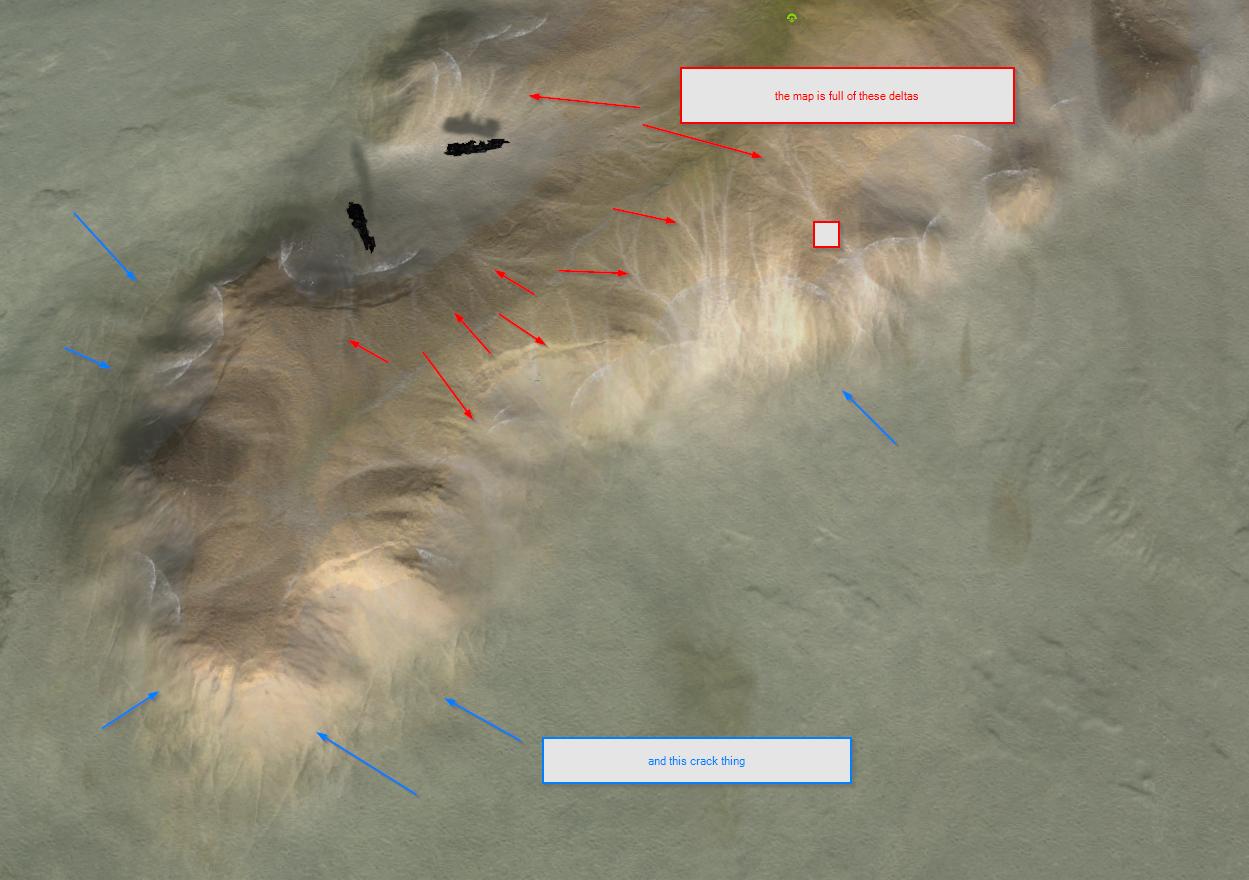 when you are zoomed out a bit it looks GREAT

these mountains look fake - the lines are too vertical? too uniform? too repetitious? 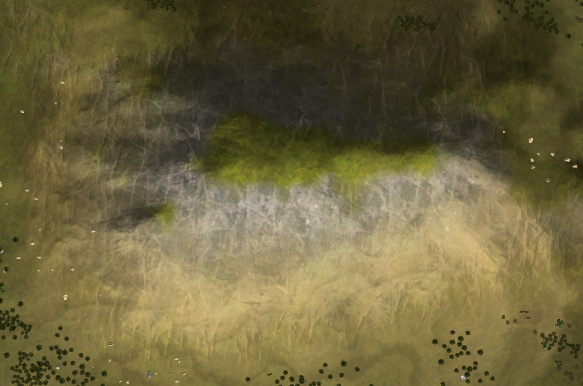 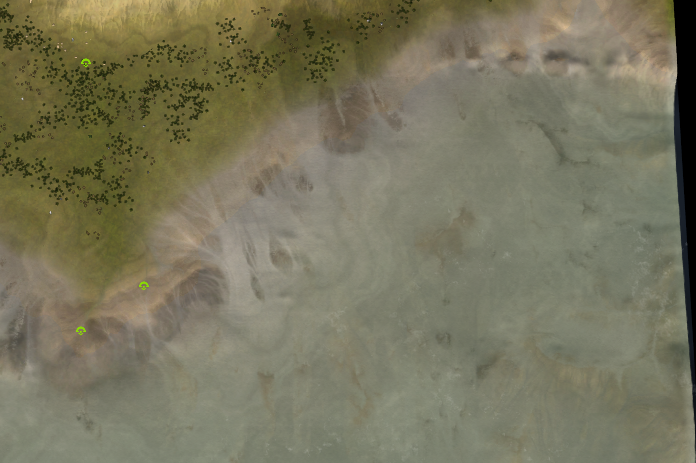 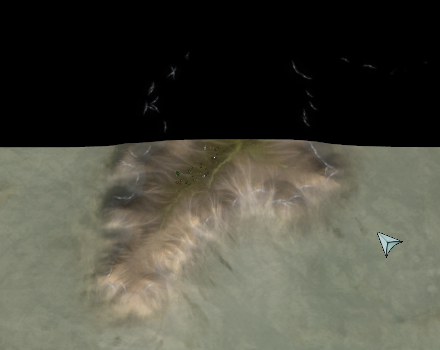 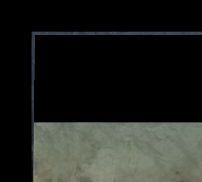 @nine2 Thank you for your feedback!

About the river-delta thing: this is erosion and is in nature quite common!

Depending on the material the same patterns can be seen on a different scale - especially when things are sandy it really starts to show. I think that:

The cracks (as part of the normal maps) that you see are part of one of the stratum layers - I'll fix that. Its a bit too strong / repetitive. Therefore they are indeed too easy to spot. I didn't spot them underwater yet, thanks for pointing that out!

About the realism / clear at-a-glance: I don't think such a tradeoff is required. This is the second map where I apply all of these techniques to the fullest and one could easily add in additional information (such as where the beaches are) to make them shine just a tad different. All of that can be accomplished via masks (handmade or generated). in BAR (Beyond All Reason) they have a lot more extensive world machine files allowing one to generate all kinds of patterns: from bumpy grass, (small) dunes, rock formations and various other interesting patterns! What is required here is:

Especially the latter is important here - I am now experimenting with an 'adaptive' scale to allow some parts to have a higher resolution than others. More about that later

An example that is already working is the Adaptive Moon map from Svenni. He uses the same techniques but then via textures provided by NASA or similar organizations - and it looks stunning!

I'll fix the off-map waves. Not sure what the last screenshot is but it appears Supreme Commander itself is making a mistake there.

About the trade-off realism / clear at-a-glance: what would make a beach instantly recognizable? Or a piece of mountain / unwalkable geometry?

Edit: and as an example, this is how islands in Anno 1800 are constructed:

They look clear and convey the message properly. Of course - it is a different game - but it still conveys the message quite properly. I use the same techniques, just at a lower resolution due to the limitations of Supreme Commander.

"About the river-delta thing: this is erosion and is in nature quite common!"

I get that, but perhaps being realistic shouldnt be the goal. Shouldn't the primary goals be something like:

"what would make a beach instantly recognizable? Or a piece of mountain / unwalkable geometry?"

like if you look at what the do in mapgen, looks like cliffs are a different texture. Plus the texture in the middle is a darker colour - you can instinctively get a feel for the chunks of land. so you can instantly play a map you have never played before, even if it quite complex. 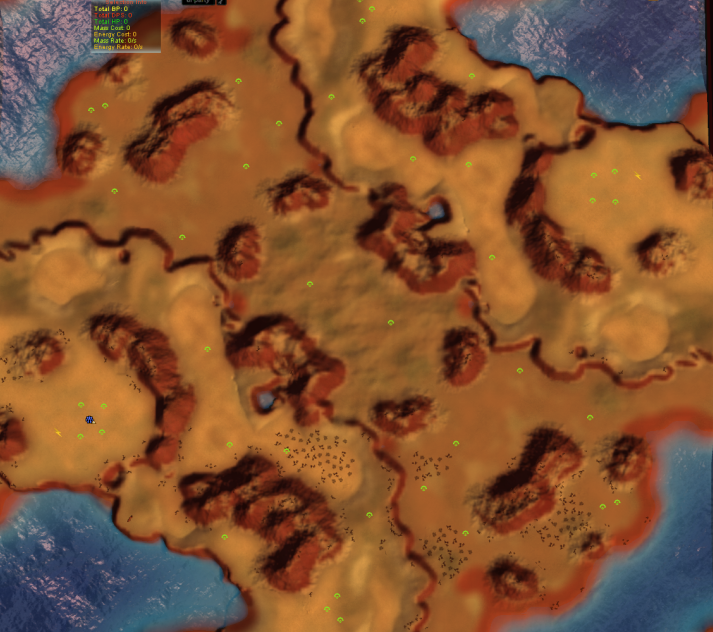 i'm not trying to say that you should turn your maps into that. its great to have maps in your style and we should keep them. im just saying that its also good to have maps in the other style -> easy to understand. probably too hard to have your cake and eat it too?

you mentioned the moon map - that looks great too. Can I understand it a glance zoomed out? Not really ... I'd need to zoom in / experiment with units to work out exactly where they can walk. And now instead of focusing on gameplay I'm spending time on map-deciphering

I understand and I agree - the visuals should support the gameplay. Visual cues (cliff = unwalkable) and supporting the magic circle (holding up the illusion of the game / experience) are critical components of that! In that sense Mellow Shallows is a terrible example overall - there are no cliffs and those that do exist are walkable

, haha. That was part of the original map however, this is just a remaster.

Everything that you mention (thank you for that) is certainly possible with the techniques I use now! It really helps with understanding where to take things to - right now the world machine file is quite basic and it can do with various more masks to communicate various pieces of information (visual cues such as cliffs, shores, elevations via color coding, etc).

So in this case - the cake can be made and eaten

I'm experimenting next on a LOUD map (another Supreme Commander community) that resembles springtime (melting snow) - I'll try and 'encapsulate' this idea of visual cues in that map. Once that is done I start with a map for Sanctuary.

(edit) As an example with a different style: 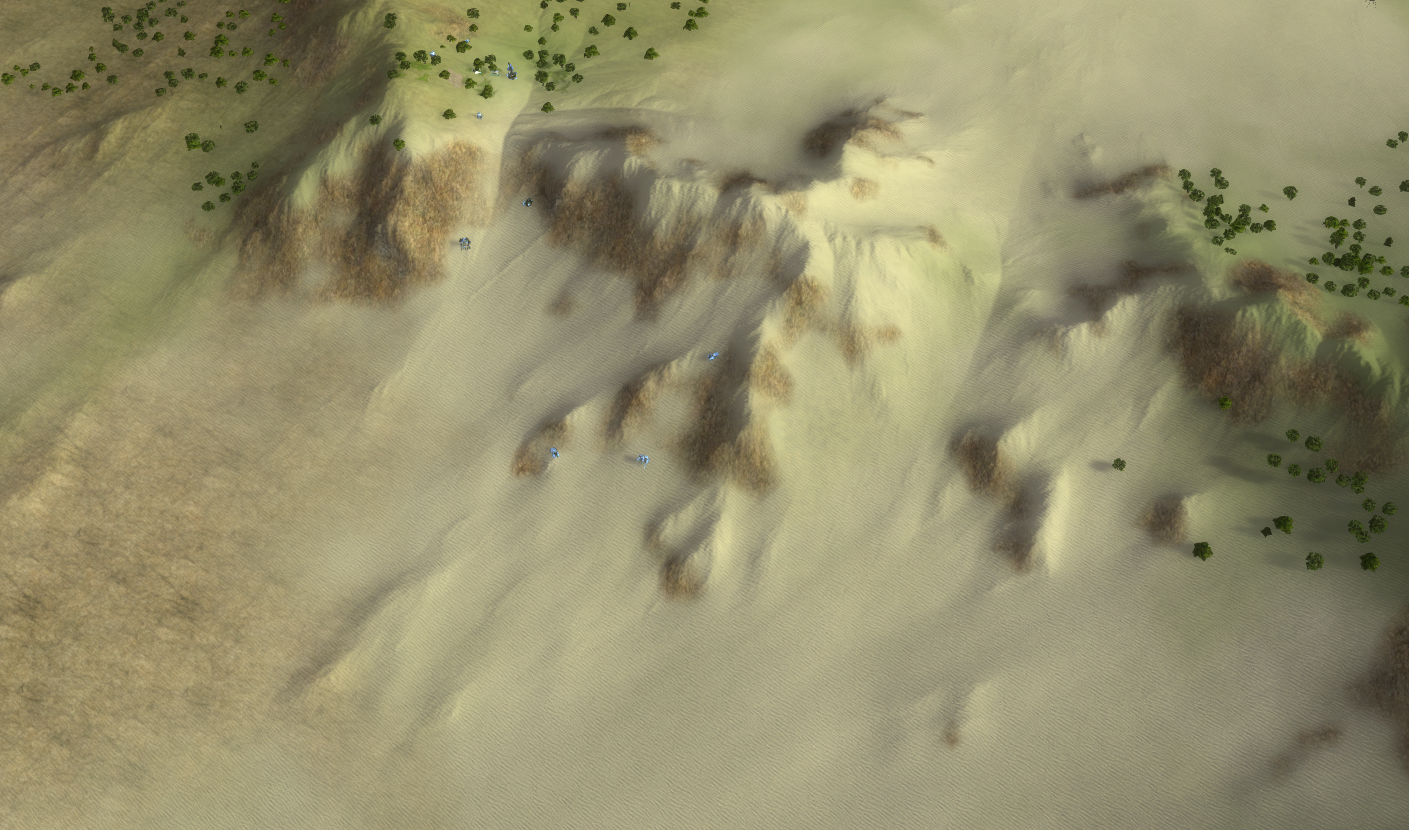 Rainmakers with (top) and without (bottom) a map-wide normal map 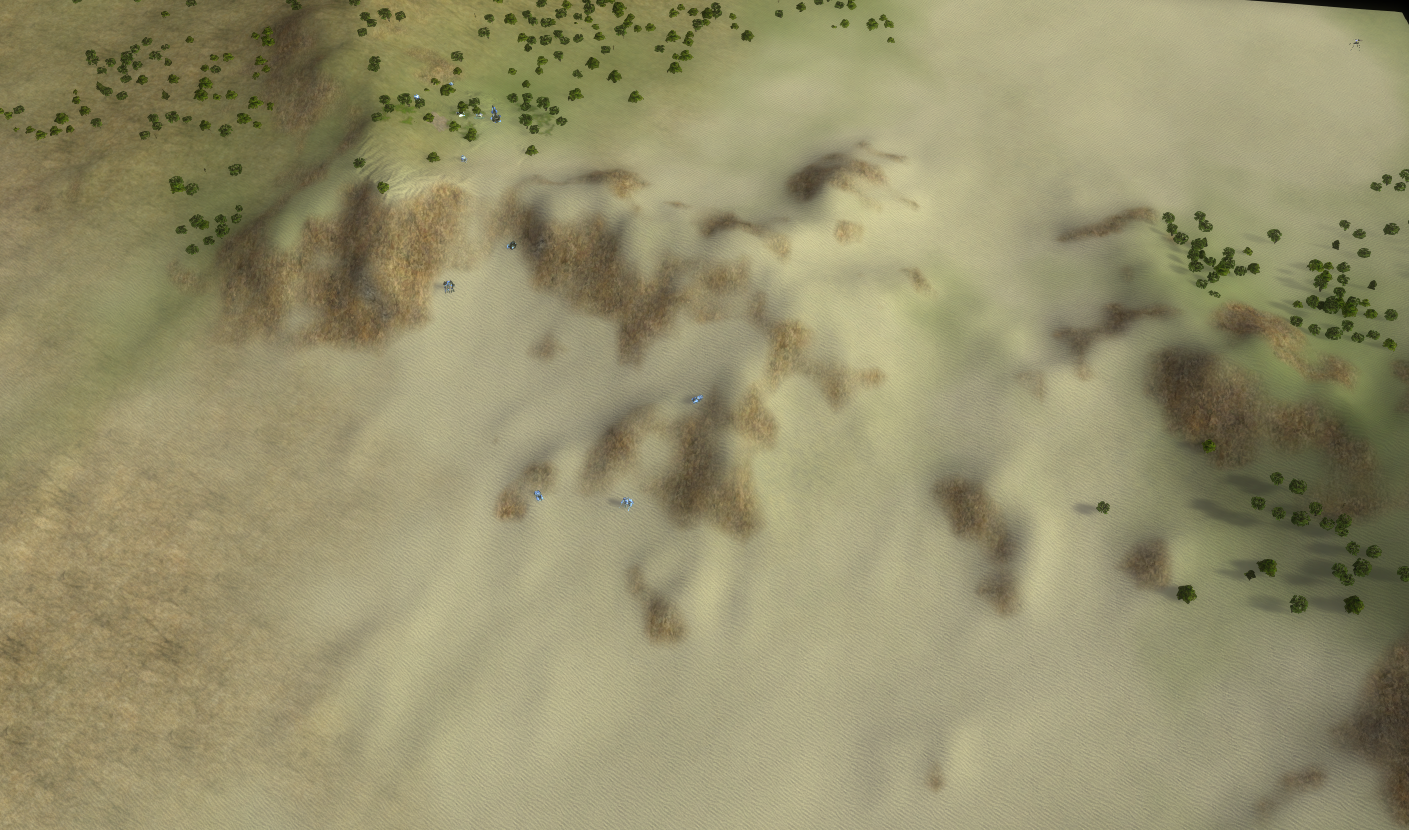 It looks a lot more natural with this version

. All the cracks are gone too - they were part of the rock texture that had a very strong normal map.

I think there are people who would appreciate both styles of maps.

The larger, more realistic maps allow a person who's playing single player or maybe Co-Op to become immersed and create a narrative on their own during the course of the battle. Perhaps positions that are at a disadvantage from the start, so that can challenge is created just by the terrain.

And there is definitely a need for balance maps to be used for, let's call it "competitive" play. These are basically chess boards.