Torp bombers are too strong vs subs

Surely you are not looking at something like Equilibrium Navy balance?

Additionally, I think it's kind of ridiculous that properly micro'ed torp bombers are able to mass efficiently trade with cruisers, even though cruisers are supposed to be their navy-based counter. There should be at least 1 naval unit that can mass efficiently counter torpedo bombers (hover flak is not a naval unit, and 2 factions don't even have it).

Following the logic of Blodir's post, it would seem like adding more health and or torpedo defense to submarines and cruisers would improve the situation. Done correctly, submarines would then be viable enough to use more frequently without being overpowered, and cruisers could actually mass-efficiently trade with micro'ed torpedo bombers without being overpowered themselves.

Alternatively, there are other ways to address this issue, but they can get more extensive. For perspective, here is a quote regarding Equilibrium's navy balance: 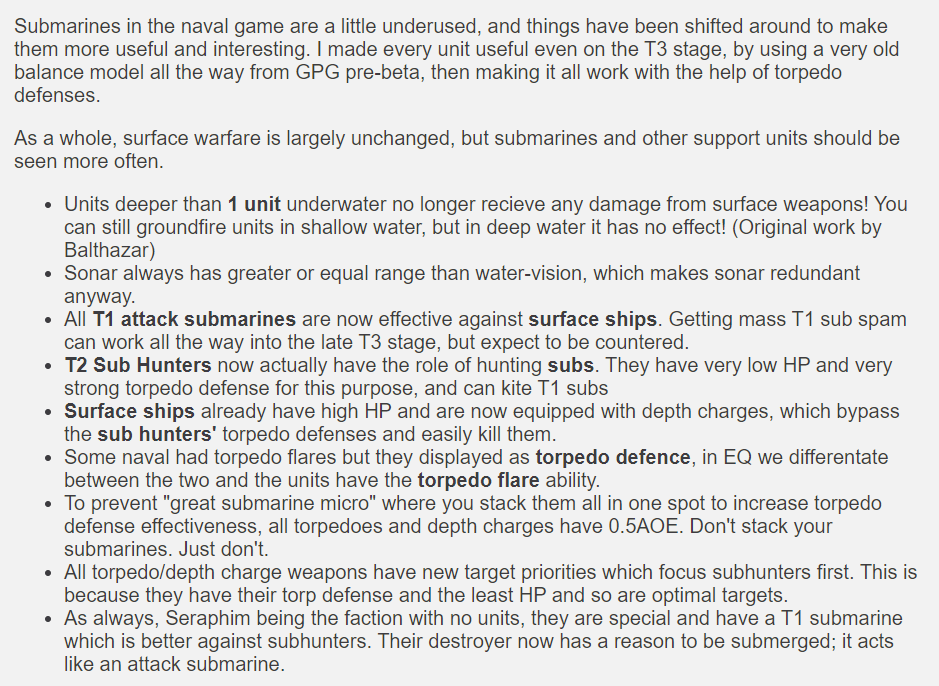 Wouldnt call a cooper a hardcounter for t2 subs kappa

At the moment subs (particularly T1 subs) suffer from being slow to kill the target (so they can just be ignored by frigates) and it being mass efficient to suicide torpedo bombers into them (meaning even if you have lots of air support right by your subs you end up being punished heavily).

I think it's fine for one of these to be the case, but both of them ends up relegating subs to a very niche unit. If we were talking about some faction specific land unit where there are loads of alternatives that'd be ok, but at the T1 navy stage there are only 2 unit options leading to frigate spam as the favoured option in most games.

A couple of potential simple ideas that might help address this while minimising the wider balance implications (although I may well have overlooked some) - i.e. 1 of the below (not both):
-Double sub torpedo damage, but reduce sub health by 40% (although on the face of it an overall boost, torpedo defence becomes more valuable and means in some matchups subs will be worse off) - the intent for this is to make it harder to ignore subs, without making them more powerful vs things that counter them (so torp bombers will crush them, torpedo launchers will also be a defensive option, and non-UEF destroyers should also do well)
-Double torpedo bomber health and reduce the strike damage by 35% - torpedo bombers wont be able to 1-shot t1 subs, and will need more to 1-shot a cruiser, but should still do well against non-AA dedicated units such as frigates. I.e. the idea is to make it more likely theyll survive to do multiple passes on a unit, while also making them weaker if they're being suicided.

@maudlin27 I like the torpedo damage/Sub HP idea the most. I can think of some faction-specific pros and cons, but a sweeping benefit would be torpedo turrets for all factions would be more interesting.

That Equilibrium balance seems pretty straight forward tbh, and makes sense. I'm a fan of it.

On another note, you can micro torps against cruisers?? Any want to explain to this dumby?

T2 subs crush all destros if in big quantitys. Little less against Aeon maybe, but it is still convincing. 1 Sera destro agains 2 Cybran t2 subs, destro wins with barely some health left. And that is kind of equal echange, as destro is slightly more expensive mass wise. But 20 destros against 41 t2 cybran subs, destros get totally wrecked.

T1 subs also crush against all destros in big quantitys, maybe less than t2 ones, but still. Note that what sandboxing I did was without particular micro or kiting.

My point is, that Sera does not even have anything to fight against t2 subs in t2 level. Making subs stronger seems like bad idea.

In the same time, the fact that navy has no units capable to fighting efficiently torp bombers, seems like a huge problem. What is the point of navy anyway, if torp bombers can efficiently kill all croisers and hunt down the rest of the ships?

I would suggest to make torp bombers weaker. Maybe two times more expensive, with same dps. And eventually up to two times stronger, if necessary. As it would reduce efficient suicide torping, while not reducing too much overall value of torps. This is just a very general suggestion.

What games are people citing that torps are OP? All 10x10 water maps are won by Cybran frigs. Half the 20x20 water maps are won by them. The other half are senton/metir/lena river style where you will be sam creeping/making hover flak/cruisers/shields. It isn't a simple question of "oh just look at the mass in torps vs navy" unless you're looking strictly at 4v4s or whatever because the mass investment in torp production to match navy investment if you decide to not have much of any navy is huge. And it isn't like ints don't exist and can be made for less equivalent infrastructure buildup.

I was intrigued to read about Equilibrium's approach - and it rings true with what we do in LOUD as well. The upshot of it is simple - the surface fight - and the sub fight - become two entirely different theatres - making the composition and application of naval power much more interesting and diverse. Especially with respect to the application of torps vs. torp defense, and the proper application of the depth charge (which is something that is really muddled in the base game).

I’d rather see Subs get a dramatic DPS Boost more than anything. But a different topic and honestly there is topic worth having. /shrug

It's not the issue that torp bombers are too strong against subs. The issue is that subs are generally too weak.

T1 subs are complete rubbish. I wonder if someone could take pure stats on how much frigates are being build in every naval maps compere to subs. Most likely t1 subs wouldnt even be built in most situations on all naval maps regardless of their size and player count.

They have no role in this game. They lose to every unit with torps except what? Wagner? T3 sonar?

EQ fixed that years ago. FAF didnt even bother to make it less worse. Because the point you start looking at naval balance and adjust t1 subs you will realise t2/t3 phase is way too unbalanced with different unit rosters for each faction (the way torp defence works is also a factor). I highly doubt someone in FAF team would do something this big.

...or if someone would just copy-paste EQ in FAF.

I see 10x more t1 subs than labs. Are labs worse than subs?

So I don't see much need for a change here?

T2 subs don't get built much because of torps. Making them harder to target might help?

What if frigates have bigger hit boxes below water so that torps are more likely to hit the frigs, thus shielding subs?

Cruisers vs torps is kind of problematic, because torps are almost the only option if you lose navy and are close to the shore. Navy is just a little bit too strong vs land in my opinion.

Labs get made all the time?

Subs get made all the time?

T1 subs are absolute useless garbage and whoever cares about them being built in 1/10 games is just being a clown. 2 Torp bombers clean 10 subs in like a minute.

How about tuning torpedo defence to be useful vs torp bombers?

I just did a little testing (replay). The UEF 'Stork' drop torpedoes that activate sub torp defences (usually only 1/2 torps hit). All other torp bombers bypass these (anti-torps don't even fire).

All T2 subs and both Seraphim subs have torp defences. This allows the Sera T1 sub to sometimes survive the first pass from a Stork (400 HP, torp does 375 damage × 2).

What if this were adjusted and torp-bombers changed to behave like the UEF Stork (2 × real torpedoes) and sub anti-torps were re-balanced to more reliably counter the first torpedo? This improves subs vs torps and subs+cruisers vs torps, but not too much, and probably doesn't affect much else. (Maybe destro anti-torps should be tweaked to not block dropped torps, don't know.)

How about making torpedo bombers only hit 50% of time vs subs? Is this scriptable?

A torpedo bomber adjustment and a rework of underwater gameplay of navy is planned but will require time and a lot of testing.