The Problems With The UEF - Part 2 (ACU Billy Nuke Upgrade)

This topic has been deleted. Only users with topic management privileges can see it.
last edited by ComradeStryker
0

I dont think the missile hp should be increased-there’s already a disproportionate difference in aeon tmd effectiveness vs billy nuke to the other tmd and that would just make it worse.

There is currently a mod (work-in-progress) from Spikey to assist us in visualizing all the changes. As for the projectile's HP, after visualizing it, I think this could be toned down to 5 hits or be left as is. With all the other changes made to the projectile, it seems to be more effective and fair to still have 4 or 5 HP.

As for Aeon TMD... I beg to differ. As I stated in my post, the flare fired from the Aeon's TMD deflects the projectile entirely - nullifying it completely. What it lacks in range & coverage, it makes up in effectiveness in countering a Billy projectile.

I also dont think the upcoming buff and nerf to tmd will impact in this as the buff part comes when tmd are faced with multiple missiles at once.

All tactical missile projectiles had their HP increased (static launchers, cruisers, ACU upgrades (with the exception of the Billy)), and TMD was buffed so it could better handle large groups of missiles, as you stated. But you may be correct. This only affects groups of missiles which likely won't be happening with the Billy. However, if all other projectiles's HP was increased, the Billy should've received the same treatment as 4 HP seems a little low and 6 seems a little high - 5 would've been perfect.

The damage boost i think would mean if they crash into t2 fixed shields of any faction they can wipe out any tmd under it (so eg 3 tmd under a t2 sera shield could all die to a billy nuke that explodes when hitting the full health shield),

I seem to have overlooked that possibility. But, again; after initial tests, I may agree with others here that the projectile's HP could be reduced. The other buffs would still compensate for this change. However, if 3 TMD are together, it would mean they only need 2 volleys to destroy the projectile - so it is likely that the projectile won't hit. Still, even with 5 or 6HP, It would be unwise to fire a Billy against 3 TMD.

and I dont think they should be buffed to the level where they can defeat a well defended base on their own.

You are correct, this isn't a base-killing weapon. These buffs are merely so it can be more worthwile in its investment.

More of an outer ring damage would be nice though.

I agree. The damage fall-off is too great.

Another option could be to reduce the cost of the missile itself? It currently costs 12 times as much mass as a tactical missile

12x the cost and it only deals 2x the damage - with the exception of a larger AoE, of course.

At the moment, the game only lets you have one or the other, not both. Meaning you can only build Tac Missiles with the Tac upgrade or Billy's with the Tac Nuke upgrade. But honestly, having both options as isn't a bad idea.

Thanks for your feedback!

I think the outer damage should be buffed or just removed??
Because it makes the area look much bigger than it actually is, which is quite confusing for newer players.

I agree - the AoE is very misleading - and it falls off even more so the closer you are to the edge. I've seen it do a massive 2 HP worth of damage! Nice, right?!

I feel like when i asked to buff gun spash for seraphim.

Too expensive for early game, too weak for late game

I completely agree! So many late-game upgrades that don't quite fit well.

Though I would argue that the Seraphim has the other gun upgrade that goes well with Splash. Pairing both together can really strong.

Even more so when you see that with these upgrades, a Sera Com could go face-to-face with a lot of Experimentals. Not many other factions can do that.

Maybe vs a monkey or if you get in range of a fatboy but no, a sera commander still get destryed by experimentals

Of course - experimentals are experimentals. You'd be out of your mind if you try to take one head-on, But it really does depend on the situation, too. A weakened Ythotha or GC would be a good target.

Though I think This is where Billy does Shine - The range is quite useful.
Fire from afar without risking your Commander.

I agree with Stryker, billy lame many times

@brannou said in The Problems With The UEF - Part 2 (ACU Billy Nuke Upgrade):

I feel like when i asked to buff gun spash for seraphim.

Too expensive for early game, too weak for late game

IMHO that's just balance for these things. Look at Cybran: mazer is expensive enough for your opponent to have T3 air by the time you're done. If it wasn't, it'd be OP. Same with cloak+mazer versus omni. If splash was viable before T3 land, it'd be unstoppable. 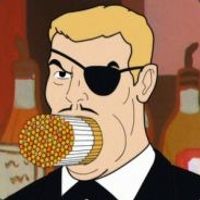 Here's a Billy Buff suggestion; increase the maximum speed of the projectile. Maybe quite significantly.

The increase in usefulness is two-fold:

increase the maximum speed of the projectile.

I honestly didn't think of that. That is actually quite smart.

Though, I believe we would still have issues with the damage AoE.
The fall-off damage is still quite high, in my opinion.

Originally, I had it at 10,000 but after seeing some tests, I think this could be toned down to 5,000 or less. This way, it would still damage units on the outside ring.

Still need to conduct more tests to have a more balanced option.

But, yeah, An increase in speed would be quite useful actually.
Thanks for the feedback. I really do like that idea.

Alright. I gotta point this out as it's been happening quite often when I use this upgrade...

Wouldn't it be of benefit to increase the HP of the projectile drastically and increase the damage of the TMD to match?

Example:
TMD would deal 50 damage and standard missiles would have 50 hp, the damage from the TMD kills the missile in one shot - no change here.
If the Billy has 151 HP, it would still tank 3 shots with the 4th killing it.

This change would mirror the Nuke Missile HP change that was made a while back - to prevent it from being shot down by random fire as it is fired or as it is landing.

This is happening because of an issue with patch 3741.

This is happening because of an issue with patch 3741.

Ah, I was not aware that it is an issue.
But, could've sworn it has been happening to me since the beginning of time. Hmm.

Yes, it can happen if it hits a unit somehow. But not arbitrary projectiles.

@barry_whiter said in The Problems With The UEF - Part 2 (ACU Billy Nuke Upgrade):

Here's a Billy Buff suggestion; increase the maximum speed of the projectile. Maybe quite significantly.

The increase in usefulness is two-fold:

I was rereading some posts and recalled this one, so, I wanted to bring more attention to this post and this specific suggestion, as this could be a meaningful change without making the projectile too strong.

At the moment, the Billy's main strength comes from the First projectile the ACU fires, as that's when the enemy doesn't expect it. Any projectiles after that have diminishing returns as the opponent has already started building more counters.
With increased speed, subsequent projectiles would be a little more viable, especially the projectiles fired from a longer range.

Though, I still want to point out some other issues, as well. Specifically the missile HP in terms of random projectiles hitting it and destroying it, fall off damage in terms of minimal damage, and the projectile cost/upgrade cost.

Any thoughts on this?

@tagada said in The Problems With The UEF - Part 2 (ACU Billy Nuke Upgrade):

Do you actually think billy is bad or is this more of a fine tuning than a buff?

It's not a qol since it does nothing but buff it against tmd, which are you know, the units that are supposed to counter it and buff it against big t3 armies against which it already is more than strong enough. Buffing missile speed would probably make billy OP if you ask me.

Mostly fine tuning, maybe small buffs. My initial idea is to decrease the inner dmg while making the outer stronger but probably less AoE. Make it more reliable. Would be nice if you could change the icon to actually see it (that would be an obvious nerf and would need other adjustments ofc)