The Problems With The UEF - Part 1 (ACU Bubble Shield Upgrade)

This topic has been deleted. Only users with topic management privileges can see it.
last edited by ComradeStryker
5

THE PROBLEMS WITH THE UEF - Part 1 (The ACU Bubble Shield)

After debating whether or not to post, and after my buddies finally encouraged me to do so, here I am. Hi, my name is ComradeStryker, or Stryker for short, and we need to talk about the UEF.

To start off, I would like to share some quick info on myself. I am currently a 1,500-rated player with over 1,100 ranked games with the UEF faction alone. I've been told I have around 1,800 matches played if we include unranked games. Now, I am aware that there are players who have played significantly more games, but I just want to lay out that I do have a bit of experience with the UEF faction.

I would like to address several areas that I believe would significantly improve the UEF faction from its current iteration. Rather than addressing these concerns in one large post, I have decided to split these into multiple small posts. This will be part 1.

Just a quick note, I use Advanced Strategic Icons, in case someone is wondering about the weird icons I have.

This was originally planned to be one significantly large post, but I doubt many of you would want to read almost 8,000 words all at once. So, if anything ends abruptly, I apologize, as my decision to split this article up was made at the last minute, so, I couldn't iron out everything.
All information was gathered from in-game statistics and cross-referenced with the unit database.

These are just some problems I wanted to bring attention to. I am offering my own solutions to these problems, however, I am not a balance team member, nor do I have a large data pool to back up my suggestions; Hence, the balances will likely need some adjustment. There may also be some better ideas to fix these issues, out there - so I encourage you guys to suggest your own ideas as well.

Now, to get started!

FtXCommando has already pointed out this issue and I'm here to reinforce it. The UEF's Bubble Shield upgrade is absurdly power-hungry as it costs nearly as much power as a Cybran ACU's Laser upgrade! We're talking about a 50,000 power difference (450,000 to 500,000). This is a huge issue, as the purpose of this upgrade is to allow the Commander to remain on the front lines for an extended period of time and for it to push with some unit support.

The upgrade itself is meant to be used during the early stages of T3, but because of its power cost, it never gets used as such. The issue is that you need seven, I say again, SEVEN T3 power generators (pgens)(-13,465 E/s) to have this upgrade passively building without powerstalling! Don't even think about assisting the upgrade unless you want your descendants to keep paying the power cost. Just for context, adding in a T1 engineer to assist the Commander with this upgrade will cost you an additional -661 E/s.

Now, these seven T3 pgens are needed if your Commander has the T3 Engineering Suite upgrade as it provides 100 Build Power (BP) for the ACU. Roughly halve that amount if you have the T2 Suite - still needing about three T3 pgens (-5,788 E/s) to compensate for the upgrade's power. This number seems like a more reasonable power consumption cost if it were a T3 Engineering ACU. Constructing the pgens needed for that upgrade to be usable at its most advantageous time would mean you would have to focus solely on your economy, never mind actually playing the game (building land, air, navy, and structures). It would be made even more difficult to obtain this upgrade if you're trying to manage an entire base, army, and its economy on top of that.

(This is also a second upgrade, needing the previous upgrade to unlock)

The power cost should, at the very least, be reduced by half. The Bubble Shield's HP could be altered if need be, but I would say to still offer a large HP boost compared to the first shield upgrade (which provides an extra 19,000 HP) to still make it a lucrative upgrade.

Now, let's talk about the bubble shield itself. The bubble isn't nearly as big enough as it should be, as only a handful of units can fit underneath it. This is noticeable when the ACU and an escort of units enter combat. The units tend to strafe out of the shield constantly, especially if you're micro-managing (microing) your ACU, which you will be considering you're on the offensive.

Another factor here is the speed of the ACU and that of the units accompanying it. Every unit is faster than the ACU. Yes, even the Percival. This causes even more issues as when you order them to move to a destination, the units will leave the Commander behind. 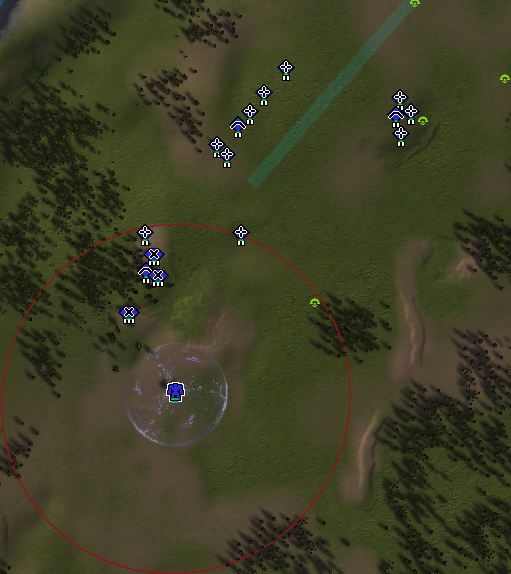 Image: Shows land units not slowing down for the ACU

A formation move would help keep all units moving together, but most of the time, it would place the Commander at the far back of the formation or at either side. Even if the ACU was in the middle or at the front, the spacing between units in a formation is too large leaving the majority of them outside of the shield cover. 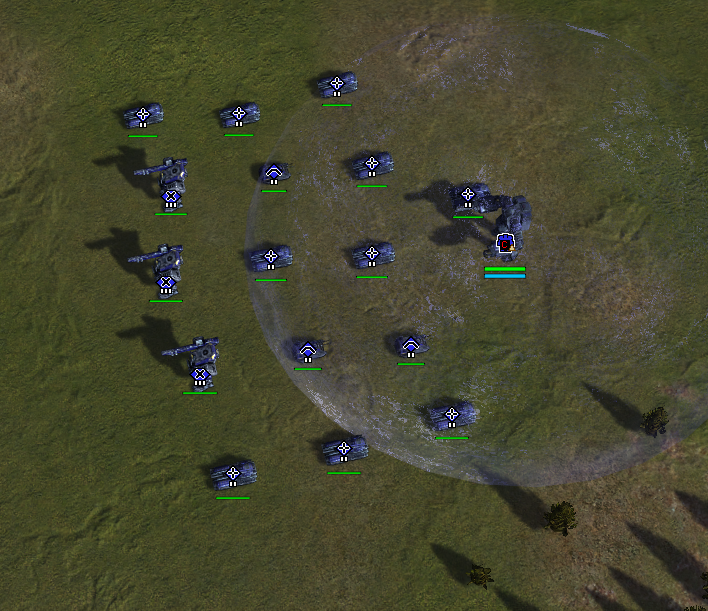 Image: Formation 1 - ACU is placed at the back 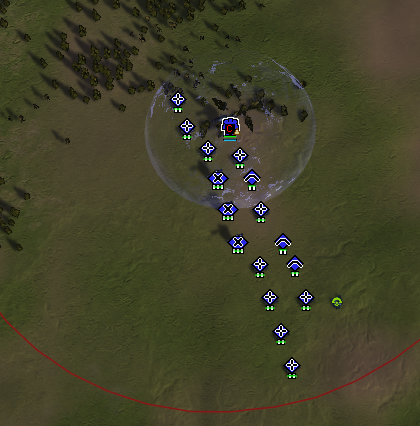 Image: Formation 2 - ACU is placed on either end

On top of that, even with a smaller number of units, giving them a formation-move order, then updating or changing that move order will result in the units cluttering around into a pathfinding-wreck, leaving them vulnerable to attacks as they have likely moved out of the ACU's shield cover during that time.

You may have thought that assisting the ACU may work, as units tend to circle around the assisted unit or structure, this is true. However, in this case, it becomes difficult to move the ACU as it bumps into the units constantly, as they do not change direction as quickly as the ACU does as there is a small delay (between the order given to the ACU and the units assisting the ACU to react). This becomes increasingly more difficult to manage as the size of the formation grows. 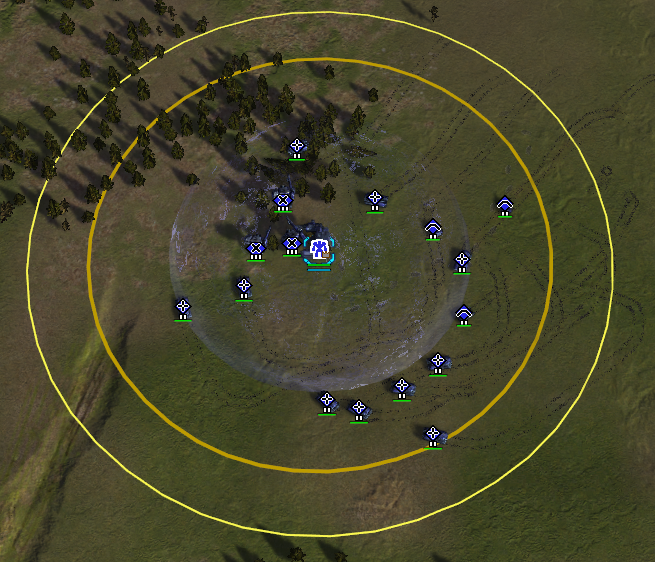 Image: Based on the track marks, you can see that the units are going mayhem. (These units were given an order to assist the ACU. Giving a formation-move order when needing to change directions during combat would have all units bumping into each other, similarly to this assist order

Adjusting the size of the shield to encompass a larger army would help alleviate most, if not all of these issues.

The ACU's Bubble Shield upgrade is very expensive in energy and the shield size is not large enough.

Thanks for your time!
Again, I encourage you all to offer your own suggestions.
I appreciate the feedback.

I will be posting the next parts over the course of the next few days.
Sneak peek at part 2: The Billy Nuke

For now, see you on the battlefield!

Thank you for a detailed post, as you've already mentioned Ftx posted an issue about this topic some time ago, and thus it is on our radar already. I am not sure if it will make it into the upcoming patch or one after that but it will be adjusted. In terms of the changes, the most likely ones will be: Make it a stand-alone upgrade -> You have to choose between a bubble shield and a personal shield, decrease the cost, decrease the HP and increase the shield radius.

UEF got some real forum shooters out here

I'm happy to know this upgrade is getting some attention!
Can't wait to see the rework of it!

@comradestryker said in The Problem With The UEF - Part 1 (ACU Bubble Shield Upgrade):

Another factor here is the speed of the ACU and that of the units accompanying it. Every unit is faster than the ACU.

Scathis would have another opinion about this

Scathis finally feels recognized, don't point it out to it!

@ComradeStryker I would be interested to hear your thoughts on the numbers involved in the proposed solution of splitting the bubble and shield into separate upgrades. What kind of HP would u think is best from bubble?

I would love to see that too! Perhaps replacing the old bubble upgrade with a heavy personal shield upgrade.

Its current iteration has 36K which is really effective - at sitting in the back of your base.

Jokes aside - considering it should be used as a front-line upgrade, I'm thinking a bit more than the current personal shield upgrade (19K SHP)- probably around the 25-30K SHP mark. I would say more than the Aeon heavy personal shield which has (25K), but marginally more expensive than both of its upgrades combined.

Again, though. It's hard to say without actually seeing how it would work in-game.