This topic has been deleted. Only users with topic management privileges can see it.
last edited by Fearghal
9

Hello everyone.
Hope everyone enjoyed the action and great casting of the RCIV.

I have some idea's for the RCV and VI, that I'd like to throw out their for some feedback.

I'm starting this RCV thread "early" because there needs to be a Lot of planning for this one, as
We are going to have 7 Different AI's!
and it will take time to have the different AI's play tested and assigned to their maps.

I would like to give more players an opportunity to have some Rainbow Cup Tourney action,
hence the <1800 rating, (Everyone who registered over 1,800 did get drafted in RCIV)
And also showcase some other fun/exciting AI's that have not appeared in the RC's yet.

Would like to have a draft type system similar to RCIV and
for the tournament rules...
I'm basically going to copy and paste from the RCIV rules forum into this thread as
the RCV rules will be 95% the same.

As far as using 7 AI's for this upcoming RCV,
I have a solution to make it work and be easy to implement.
Each Bo3 bracket will play vs the same AI for the whole match.
This way the Game lobby captain of each Bo3 match only has to set the match specific AI mods
once for each match they are hosting, instead of for each game.

RCVI will shoot for end feb/march next year and be Open rating.
It will limited to using only the top 3 performing Computer Cup AI's at the time.

Most brackets Bo3 will use one AI exclusively.
That means the game lobby host will "only" have to load the
match specific AI one time for that match, along with Uveso
(which is needed for all the AI's to make map markers) 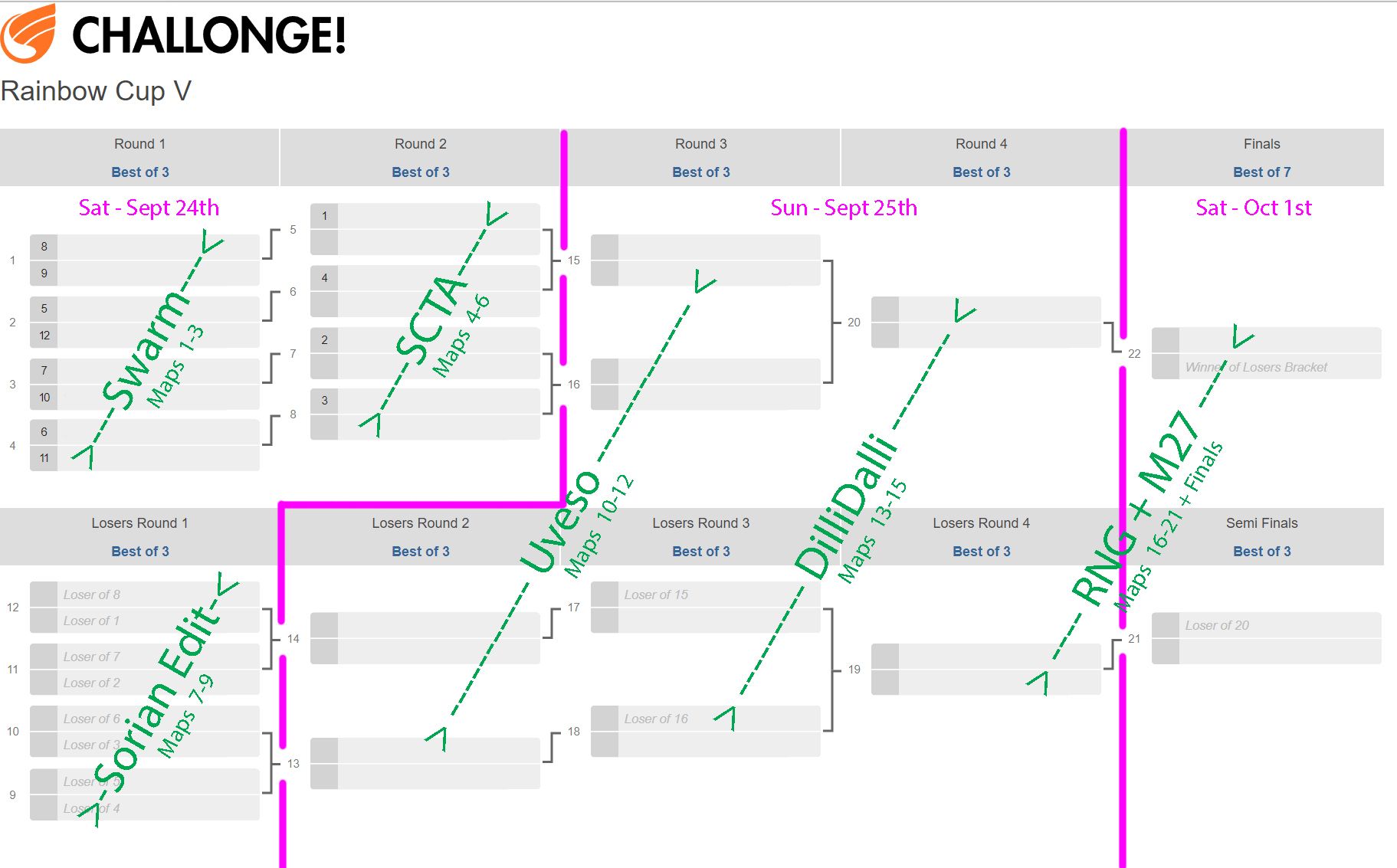 Registration will open approx 2 months before confirmed start of tourny.

Am always on lookout for good 3 v 3 v AI maps,
submit any for consideration please.

AI modders are encouraged to find and test 3 maps from the below 42 Maps, or one of your own map/scenario's.
and submit the map name.
I will then test the maps and fill one bracket of tourney with those 3 maps.
Lock up the fun maps before the others do, and
if your AI is able to play water maps, try picking 1 or 2 water maps for variety as
some other AI's do not make navy.

Choose maps from pool below or submit one of your own.

Need Faf creative team to help name this tourney,
with 7 AI's ...
I'm thinking RCV - Masters of AI Tournament, or something along that line.

If i am 1800 will i get to play? I read smthn about u letting everyone who did not get drafted last time play.

@spikeynoob
Thanks for question,
I would like for everyone who registered for the RCIV and did NOT get drafted,
OR
were forced to withdraw on Feb 24th, to get a chance to play in this tournament.

I already checked the ratings of the 4 players who withdrew last minute and none that I know of are currently over 1800,
But....
the idea is to give players that registered for the RCIV an opportunity to play.

I can see a situation where someone who was passed over at 17-1800 in the RCIV,
(due to maps played, ie."gap player" or "unknown" Global rating player) and
have rating rise to mid/low 1800 and ...
then be disqualified for this tourney and
still Not get picked in the Next RCVI open.
These 'players' would fall thru cracks where, they are not strong enough to get picked in the Open RC's, but too high rated for this <1800 tourney.
So I would like to make exceptions for the 1 or 2 players who might be a "little" over 1800,
and have previously registered for the RCIII or IV cups and did Not get drafted.

Since you gave notice today at 1763 rating,
have been playing steady since RCIV,
I would say it's "fair" to allow you to play if you go over the 1800 rating cap.
Any players that register in high 1700's early, and goes over
1800 by end of draft or fixed date chart for captains,
will of course be the highest seeded captains and get later draft picks.

Now... If someone has improved 'so much' that they are considered much stronger than the other captains,
and
is also considered a shoe in to be picked for the next following RCVI open tourney,
to be held 6 months later, then
we can decide on an individual basis, to make that player wait till the next Open RC.

I still have to figure out how to enforce ratings cap.
Do I take a snapshot at a certain date like last tourney or
leave ratings change open right up to registration deadline, or later?

For the last 2 RC tournaments I have used the higher of players Global or 1v1 rating.
but some players are now playing 2v2 or 4v4 games exclusively, and
ratings are now kept for 2v2 and 4v4 games.

Since the next 2 tourneys are 3v3 formats with "full share",
I believe all ratings are pertinent and should be used for players ratings now.

@fearghal Yea good idea, but also using ladder rating is not effective thing, we may play as 2400 at ladder in 1v1 , but its doesnt possible to crush 2x 2000 with two bases, at the time teammates for real may blocking mass. Its need to have a discussing about balancing, for a fact need to analyticly place a stronk list a playerst by voting. And place them from 1-t -12-t captains list. For example Nexus with 2500 is not can win vs 4x 1800, Same situation with other guys. So if u dont want to see " predicted tourney" as it was last one, u should create Voting for stronk of players. Or at least rate it by tourney situations. Ratings from max number of all modes, doesnt work in team games, becouse players who really understand what they need, was picked already from the list. Also balance stuff from ladder is different to global rating with more then 2 players in team, and more-bad for 4v4. So what about ratings 2v2 and 4v4? Its broken. At the time guys from global getting +10-9 from won/loss, there we getting around 15-40, and its already making such a confuss. I have no real idea how u going to make it balanced from players "underrated", or "more teamplay active". I see only one way of playing ur tourneys: "just drop rating hard from 2300-2400 to 1800, and free get the best of us to crush, otherwise its auto-loss against stacked 1800-2100 rated guys. Thats like my emotions from last trip. Not really I did my best to win with my guys, they was good, but condition of balancing still seems retarded.

Kinda confused at your conclusions here.

One of the last captains to pick won the last event, anyone below Yudi could have picked the players he picked. The problem is more that there was a 200 rating discrepancy between you and Yudi which is huge and basically impossible to overcome unless there is also a 200 rating discrepancy in the draftees, but there are more 1800ish players than people at 2300-2400 so it doesn't happen. If you wanted perfectly equal teams you would have had to force Yudi and everyone above him to not pick anyone higher than seed 30 on the draftee list.

It doesn't help that we actually put decent thought into maps before the tourney and Yudi even trained Exselsior some prior to the tourney so even with the team being stacked in rating we put in a decent bit of extra effort.

Also with the tourney ending with seeds 3, 8, 2, and 11 as the 4 final teams I think that's a pretty great spread and doesn't make it predictable.

@fearghal Thanks for the info and the chance to play. One more question, If i play in the lower rated tourny can i play (try to) play in the higher one aswell? Ofc i dont have much chance of being picked but hopefully by the time the next one comes around i will be good enough to possibly get drafted.

You can just use the api at api.faforever.com/data/leaderboardRating

The response is formatted as json api which there are plenty of libraries you can use to parse to a list. Request parameters are at https://api.faforever.com/swagger-ui/index.html?urls.primaryName=data#/leaderboardRating/get_leaderboardRating

@spikeynoob
Yes!
Everyone is able to register to play in the RCVI open tournament, to be held end of February.

I came up with an idea for the next two tourny registrations,
that is a mix and match of many of the ideas presented there.

For the next two 3v3 tourneys,
I would like to Incorporate a twist on choice #2 that most on the thread and I liked the most.

For the Open rating RCVI tourny:
I would also set an upper rating # at 2200 for the above 2200 rated players,
to then choose ONE teammate with a max 1900 rating and register as 2 players of a team.
(this allows 24 players to play with at least ONE definite playing partner of choice)
The 12 highest "combined rated" teams of 2 that register will get to play together and
draft a 3rd from a draft pool
.

Feed back welcome - What you all thinK?