If prize monies are unable to be paid out due to local/regional restrictions,
monies can be held by sponsor until a later time or
transferred to and "held" in the FAF Treasury.
Other options are also available.

The Rainbow Cup series of tournaments do not
necessarily endorse, represent or have any
affiliations with any other groups.

The Rainbow Cup Tournaments are only meant to be some
good, clean, fun FAF Supreme Commander competition,
where we get to enjoy Color Coordinated Team play.

Register below now,
and get ready to color up and show off your AI knowledge and FFA skills.

If i am 1800 will i get to play? I read smthn about u letting everyone who did not get drafted last time play.

@spikeynoob
Thanks for question,
I would like for everyone who registered for the RCIV and did NOT get drafted,
OR
were forced to withdraw on Feb 24th, to get a chance to play in this tournament.

I already checked the ratings of the 4 players who withdrew last minute and
none are currently over 1800,
And....
the idea is to give players that registered for the RCIV an opportunity to play.

I can see a situation where someone who was passed over at 17-1800 in the RCIV,
(due to maps played, ie."gap player" or "unknown" Global rating player) and
have rating rise to mid/low 1800 and ...
then be disqualified for this tourney and
still Not get picked in the Next RCVI open.
These 'players' would fall thru cracks where,
they are not strong enough to get picked in the Open RC's,
but too high rated for this <1800 tourney.
So I would like to make exceptions for the 1 or 2 players who might be a "little" over 1800,
and have previously registered for the RCIII or IV cups and did Not get drafted.

Since you gave notice today at 1763 rating,
you are registered as 1763 for tourny.

New Tournament Rating Calculating method
to determine ratings of players with rating's above 1800, when
there is an "under 100 game" total game sample size and
Where the players next highest rating has a greater number of games played".

To find the RC tournament rating:
We will proportionally blend the 2 or 3 ratings.
The next highest rating - will "weigh" that rating with a 100 game history weight.
The above 1800 small sample rating's will be weighed with it's game total.
The more games played the higher it affects their rating(rises the average) and
the fewer games played will conversely, only slightly rise the larger game sample rating.
see Formula and Examples below below:

Ratings listed below are for Seeding of Combined 2 player teams for draft seeding purposes:
Players who wish to contest a rating due to Low number of games or
due to any other reason may request a review 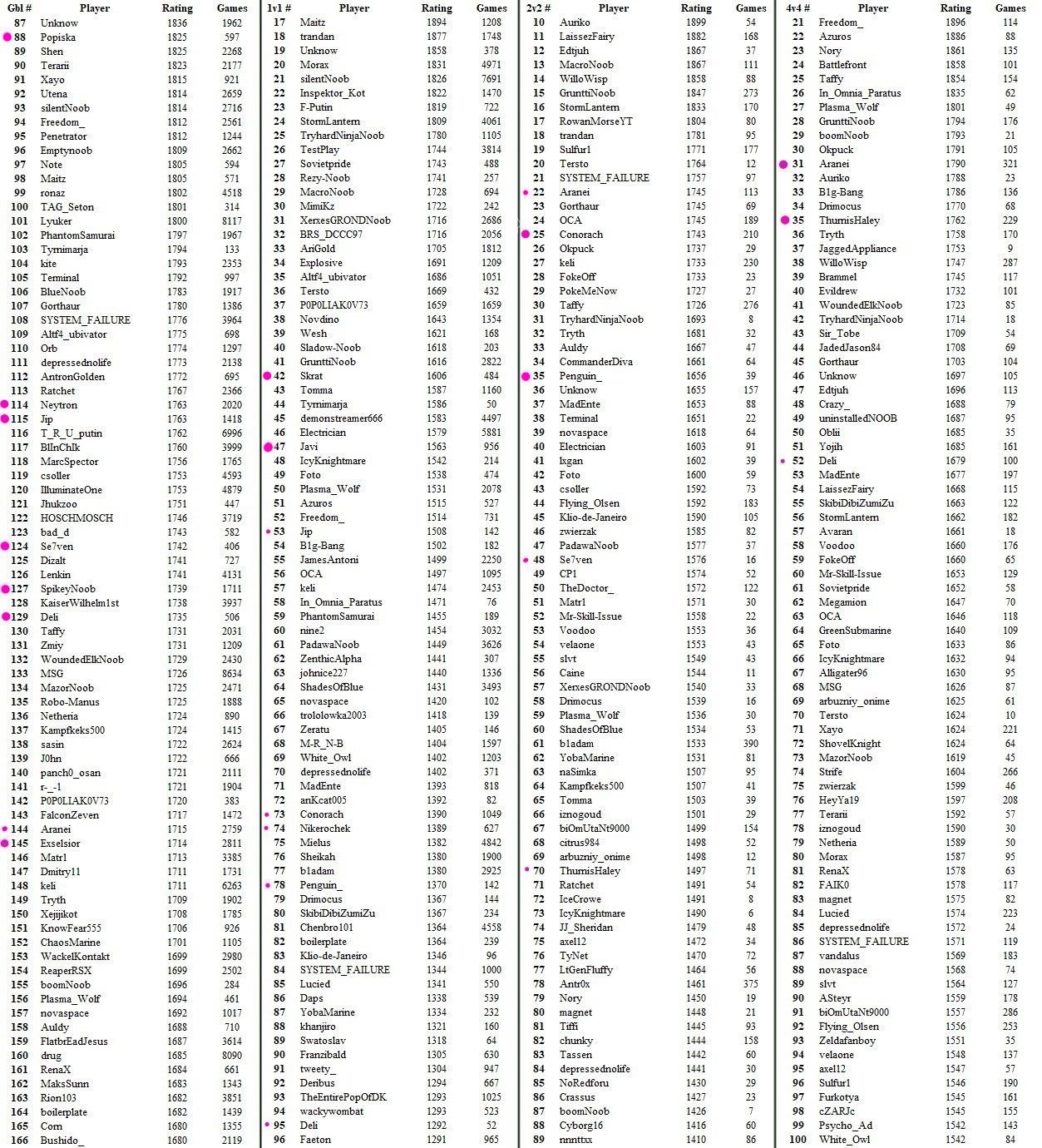 @fearghal Yea good idea, but also using ladder rating is not effective thing, we may play as 2400 at ladder in 1v1 , but its doesnt possible to crush 2x 2000 with two bases, at the time teammates for real may blocking mass. Its need to have a discussing about balancing, for a fact need to analyticly place a stronk list a playerst by voting. And place them from 1-t -12-t captains list. For example Nexus with 2500 is not can win vs 4x 1800, Same situation with other guys. So if u dont want to see " predicted tourney" as it was last one, u should create Voting for stronk of players. Or at least rate it by tourney situations. Ratings from max number of all modes, doesnt work in team games, becouse players who really understand what they need, was picked already from the list. Also balance stuff from ladder is different to global rating with more then 2 players in team, and more-bad for 4v4. So what about ratings 2v2 and 4v4? Its broken. At the time guys from global getting +10-9 from won/loss, there we getting around 15-40, and its already making such a confuss. I have no real idea how u going to make it balanced from players "underrated", or "more teamplay active". I see only one way of playing ur tourneys: "just drop rating hard from 2300-2400 to 1800, and free get the best of us to crush, otherwise its auto-loss against stacked 1800-2100 rated guys. Thats like my emotions from last trip. Not really I did my best to win with my guys, they was good, but condition of balancing still seems retarded.

Kinda confused at your conclusions here.

One of the last captains to pick won the last event, anyone below Yudi could have picked the players he picked. The problem is more that there was a 200 rating discrepancy between you and Yudi which is huge and basically impossible to overcome unless there is also a 200 rating discrepancy in the draftees, but there are more 1800ish players than people at 2300-2400 so it doesn't happen. If you wanted perfectly equal teams you would have had to force Yudi and everyone above him to not pick anyone higher than seed 30 on the draftee list.

It doesn't help that we actually put decent thought into maps before the tourney and Yudi even trained Exselsior some prior to the tourney so even with the team being stacked in rating we put in a decent bit of extra effort.

Also with the tourney ending with seeds 3, 8, 2, and 11 as the 4 final teams I think that's a pretty great spread and doesn't make it predictable.

@fearghal Thanks for the info and the chance to play. One more question, If i play in the lower rated tourny can i play (try to) play in the higher one aswell? Ofc i dont have much chance of being picked but hopefully by the time the next one comes around i will be good enough to possibly get drafted.

You can just use the api at api.faforever.com/data/leaderboardRating

The response is formatted as json api which there are plenty of libraries you can use to parse to a list. Request parameters are at https://api.faforever.com/swagger-ui/index.html?urls.primaryName=data#/leaderboardRating/get_leaderboardRating

@spikeynoob
Yes!
Everyone is able to register to play in the RCVI open tournament, to be held end of February.

New Tournament Rating Calculating method
to determine ratings of players with 1 rating above 1800, where
there is a "small" sample size and
Where the players next highest rating has a greater than 100 game history.
The next highest rating - will "weigh" that rating with a 100 game weight.
That Rating will be combined in proportion with the >1800 small sample rating as
described below:

Any Players with 2 ratings above 1800 will Not be able to participate in the <1,800 rating tournament.

Remember >1,800 players....
There is going to be another open Rainbow Cup at end of February where
historically everyone above 1,800 has
been picked to play in the 12 team, 3 man teams.
Hope to see you soon in the next Open!

I think it would be fairer to just do a captain/draft system like RCIV did, but with the captains seeded by either their highest, median or mean rating within the last year, rather than their rating as of an arbitrary date.

@penguin_ I do love the Captain/draft system,
but would like to have some more input on this idea of allowing 2 player combos be able to co-sign up first.

This still has the Captain like seeding of a draft system
(although the Capt is the 2 player team instead of top rated team player, and
there is only a 1 round draft instead of 2 round)

I think after the recent 2 tourneys, everyone who liked the Captain/Draft system signed up and played.
And even though we did have Great turnouts,..
I do think there are some players who "may have" signed up if they were able to sign up w/friend.
and
Now with many players playing 2v2, I am sure they would also like to sign up as guaranteed teammates.

Having a one round draft from bottom combined rated team up to highest rated team will
act to balance out team strengths..

Trying out this Combination "2 player cosign and draft" Team formation format
on the RCV will be a good test to see if it will also work for the RCVI Open tourney.

I am thinking when registration opens people can sign up in two ways:
1- co sign up as 2 players with max combined 3.5K rating or
2- sign up individual to be in draft.

Players can feel free to form teams from the
individual sign ups in the draft pool list of registrants,
right up to the last minute of registration:

If more than 12 teams are formed before registration deadline:
any teams not in the top 12 combined rating will be be disbanded and
offered a chance to enter draft pool as single players with
opportunity to be drafted on one of the 12 teams.

Your system is essentially the idea I was going to run with for the upcoming 4v4 event. I think it’s fine generally. The point of the 2200 ceiling rule is to encourage the top segment of FAF to actually play and have teammates they have regularly played with and therefore enjoy playing with. Since the highest level of lobbies is usually 1800+ a 4100 cap makes it possible for all players to be able to play with somebody they are at least sort of acquainted with. No idea if that’s why you adopted the rule here but that’s the intent behind it.

@ftxcommando
YES,, I read your whole 4v4 thread and liked all the reasons behind the
2200 player ceiling and the 4.1K combined ratings.
I think this format will work very well!

Registration is now open to players rated <1800* and below.

The registration period will end at 2400 EST on Sept 11th,
and the draft will start on Sept 12th.

Players may register as Doubles or as a Single.
Doubles are restricted to a combined rating of 3.5K rating.

The 12 highest combined rated Doubles who register will get to play together on the same team.
Doubles teams that are not in the top 12 combined ratings ranking,
will be disbanded and placed in the singles registry list,
to possibly be drafted by one of the top 12 teams.

The 12 teams will be seeded according to their Combined ratings and
get to draft their 3rd team member from the singles draft pool.
The draft will start from the lowest seeded team up to the highest seeded team.

To Register:
Leave your FAF player name (and team member if signing up as team),
along with the highest of your Global, 1v1, 2v2 or 4v4 FAF rating below.