This topic has been deleted. Only users with topic management privileges can see it.
last edited by
0
F
FunkOff

Neat function. I hope it works well in the future. Two downsides I can think of are it can take a long time to turn off all your fabs if you have a lot of them (or turn them back on) and it probably wont prioritize fabs which have higher mass production to energy use costs (due to mass storage or pgen askacency)

Then every time you overcharge, your mass fabs would stop running for at least 1 tick. Maybe that's not important.

I do like the idea of keeping things simple for the players.

Curious about making this an in game option. I use a mod that turns them off and you can tune it, I always turn it pretty low like 50% e

Curious about making this an in game option.

We can not have UI options for code that runs in the sim. It is a massive desync bomb waiting to happen.

We can use this topic to discuss the feature. It is fully functional on the main branch. One issue that we noticed is that there is no clear indication as to how many fabricators are turned on / off, we're looking into that.

Introducing and keeping eco manager built-in into FAF client is a bad thing. I had plenty of situations there his behaviour lead me to losing mass income for no reasons. F.e:

I often trying to use 100% of energy (including teamates energy overflow) without stalling, this system forces me to play with overflow or without massfabs. I do not think it's necessarily must be built-in in client, especially at the cost of freedom of choice.

Before introducing this mod to client I played a lot with friends who have eco manager as some form of UI mod, both of us had no problem. No perfomance effects were noticed while playing.

Situation can be bearable if disabling fabs will be done only at 10-25% energy storages, not more. Best solution is to remove this entirely.

Would it be possible to give not running fabs the paused icon? That way it's a little more obvious when you don't have sufficient power.

We're looking into that, we tried the:

We can use the pause icon, but that is also used when you manually pause the entire behavior (and shut down the fabricator).

Is it possible to add a new icon or do you have to use an existing one?

Mass extractors also have the same icon for being paused and disabled, which can sometimes cause extreme confusion on the rare occasion you intentionally or accidentally turn them off.

Would it be possible to use the pause icon with a different color for auto-pause?

I'm not sure yet - there's some engine magic involved there

Is there an option to just disable this auto behaviour? I still find that it doesn't re-enable (all) my fabs. Only when I take like 90% of my bp and pause it and the E-surplus goes from +2k to +50k apparently wakes up all the fabs.

As Jip has stated already, no, this cannot be made as a toggleable option.

For all those reading this, we're working on a UI that helps you identify what the current status quo is of the mass fabricators. See also:

We'll also introduce a threshold that no fabricators are turned off when you have more than 50K of energy in storage, while they can be turned on again. This means that if you have 15+ energy storages you effectively 'disable' the behavior.

A yellow pause button could work

As said above i just noticed integrated fab behaviour is so stupid as it is now...
https://forms.gle/w1JcLTs4Pt1pL8d56
Lets do a quick poll about it and decide what to do after it.

Lets do a quick poll about it and decide what to do after it.

The poll is meaningless - depending on who you share it with the poll can have a completely different outcome. I will refuse to listen to the outcome - we've been open for feedback, and to some extent even searching for feedback since the very start. See the changelogs, for example: 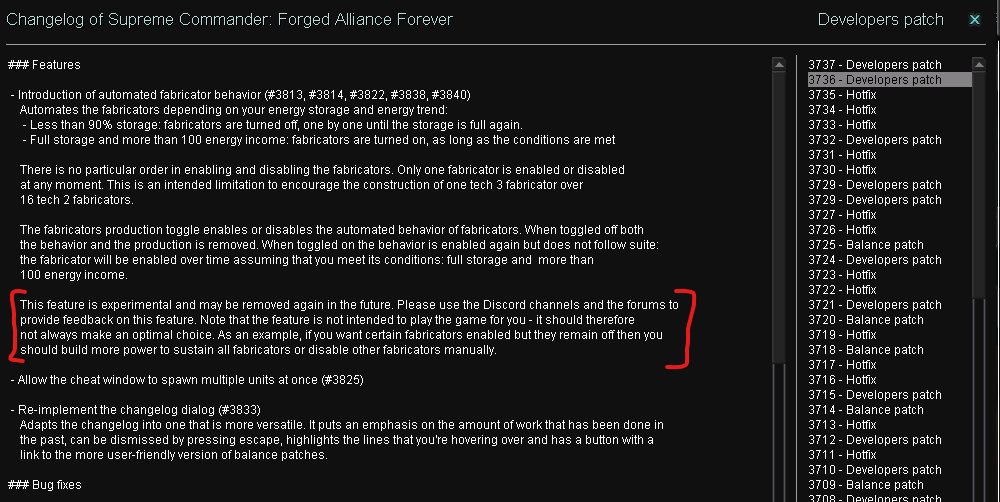 The only topic that provided some kind of feedback is this one:

Which, after 20 days - is not a lot of feedback. Other feedback came in through voice chats (like the developers session organized by BlackYps) or by people talking to us directly. All of the feedback that we've been given can be summarized in one paragraph:

Meanwhile we did identify some issues, such as people being unable to see the current state of their fabricators. We're working on that and the pull request is almost finalized:

That should make the situation a lot less frustrating as you can identify that the majority of your fabricators are turned off (or on) at any given moment.

We're also tuning the parameters slightly to allow people to disable the behavior if they have sufficient energy storage. As an example, regardless of the ratio of your storage - as long as you have more than 40K (9+ energy storages) then your fabricators will not turn off and remain turned on. This guarantees that Overcharge remains fully functional, and gives sufficient room for the fabricators to turn themselves off when you're in dire need of energy.

This thread should be closed and any feedback should go in the relevant thread.

@jip said in I couldnt help but notice all that movements with mass fabs....:

You are way too nice to even have wasted this much time writing such a well-structured post when this person clearly didn't spend more than five seconds on it.