This topic has been deleted. Only users with topic management privileges can see it.
last edited by SkyHawk
0
S
SkyHawk

Yeah, I think I'm going to argue in favor of at least one slight change to the logic:

There should never be a situation where a player is overflowing power while having idle fabbers.

Trend threshold for turning off a fabber is open to debate. Perhaps compute it per tick as a fraction of total generation?

I can understand the change from 100% to 98%, but why do you want to change the trend vaiues?

Right now the trend must be +100 or better to turn a fabber on.

You can be sitting at full energy, steady +99, with a t2 fabber that will refuse to turn on, even though you're throwing energy away.

I really, really want to suggest more complex logic for getting a better, more useful result, but Jip is entirely correct in wanting to keep it simple.

As far as the trend for turning a fabber off, let's assume you just Overcharged something and you're down to 60% storage, but you're at +5000/second. Turning off fabbers makes no sense in that situation.

really want to suggest more complex logic for getting a better

We can always discuss it - I put it out there so people do not get their hopes up.

i.e. by having it at 99 even if dealing with a T2 mass fab you should be getting a very tiny energy shortfall as it turns off and on (helping to highlight to the player there might be an issue with their power)
By having it kick in at 91% when you have significant net energy (that's more than a T3 fab) it means your power should recover quickly from an overcharge, while allowing significantly longer to turn on mass fabs to avoid significantly overflowing energy.

Fun fact: at the moment the system fails sometimes.

Repost from elsewhere:
Seems nice for those few niche eco situations where you want to build fabricators.
However, it would be nice if there was a visual indication your fabricator was not producing. It currently does not even have the red dashed circle to indicate its off.

It would be nice to be able to turn this feature on/off depending on player preference.

I'm wondering if this is what has started causing a lot of lag in the games that i'm seeing. I know i have a low end machine 64Gb of some slow 3600Mhz memory and a low end 5950x with only 32 threads, but seriously, nothing should be making this machine lagg, but something has started stuff to lagg pretty bad.

Also not sure if there is much discussion about other places where game play is getting worse and worse. Meaning i had a GC standing in a place i forgot about on the map, and about 10 T3 fighting bots hit it and they were standing right next to it, well withing the GC's range, but the GC never fired once and lost it with it only firing well too late...

I'd need to see replays @ZooDoo4U .

Fun fact: at the moment the system fails sometimes.

Then why is it still in?
I just had a game... had six T3 massfabs, all doing nothing at all while 265k energy stored and overflowing 10k per sec.

I'd need to see replays @ZooDoo4U .

Well, the online replay vault doesn't work for me either anymore, nor my rating graph... but ok, the local vault gives replay ID too, so; #17032129

EDIT: fixed my replay and viewing of rating graph by FAF reinstall.

Also not sure if there is much discussion about other places where game play is getting worse and worse. Meaning i had a GC standing in a place i forgot about on the map, and about 10 T3 fighting bots hit it and they were standing right next to it, well withing the GC's range, but the GC never fired once and lost it with it only firing well too late...

I've seen the same a lot with sera T2 pd simply not firing on anything while there is a shitton of enemy stuff in range.

Then why is it still in?

Fair question - usually we'd hotfix it as soon as we find out about it. This time however an engine patch quickly followed (live on FAF Develop), along with a few desync reports. And only then we found out that there was an issue.

The fix is available on FAF Develop - the system works fine there. We'll release it to the FAF gametype somewhere next week. You can select the game type upon launch: 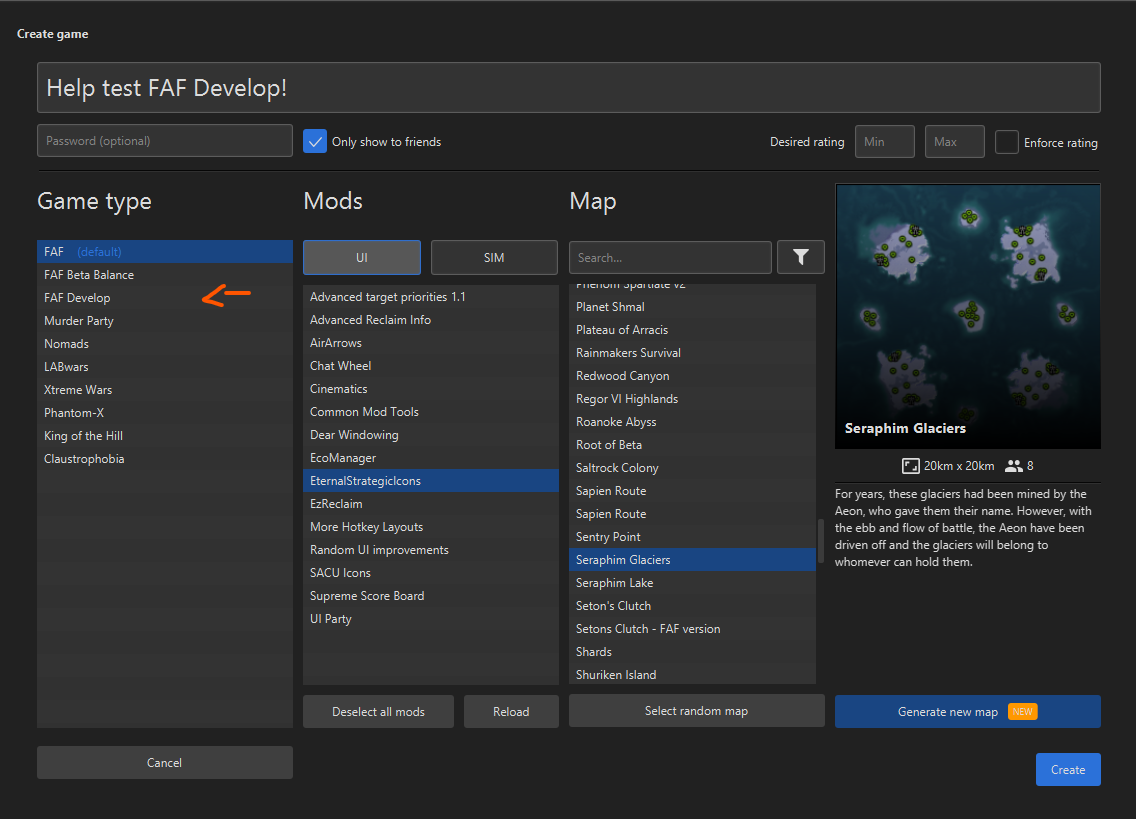 Neat function. I hope it works well in the future. Two downsides I can think of are it can take a long time to turn off all your fabs if you have a lot of them (or turn them back on) and it probably wont prioritize fabs which have higher mass production to energy use costs (due to mass storage or pgen askacency)

Then every time you overcharge, your mass fabs would stop running for at least 1 tick. Maybe that's not important.

I do like the idea of keeping things simple for the players.

Curious about making this an in game option. I use a mod that turns them off and you can tune it, I always turn it pretty low like 50% e

Curious about making this an in game option.

We can not have UI options for code that runs in the sim. It is a massive desync bomb waiting to happen.

We can use this topic to discuss the feature. It is fully functional on the main branch. One issue that we noticed is that there is no clear indication as to how many fabricators are turned on / off, we're looking into that.

Introducing and keeping eco manager built-in into FAF client is a bad thing. I had plenty of situations there his behaviour lead me to losing mass income for no reasons. F.e:

I often trying to use 100% of energy (including teamates energy overflow) without stalling, this system forces me to play with overflow or without massfabs. I do not think it's necessarily must be built-in in client, especially at the cost of freedom of choice.

Before introducing this mod to client I played a lot with friends who have eco manager as some form of UI mod, both of us had no problem. No perfomance effects were noticed while playing.

Situation can be bearable if disabling fabs will be done only at 10-25% energy storages, not more. Best solution is to remove this entirely.

Would it be possible to give not running fabs the paused icon? That way it's a little more obvious when you don't have sufficient power.

We're looking into that, we tried the:

We can use the pause icon, but that is also used when you manually pause the entire behavior (and shut down the fabricator).