This topic has been deleted. Only users with topic management privileges can see it.
last edited by Fearghal
1

@morax
Hi Morax,
thanks for the offer, to step up and help,
but LimeZ3 and Wifi_pain have already filled the vacancy.

There's a few things I'm a little confused about concerning the AIs. Dilli-Dally hasn't been updated since July of last year (and is marketed in the description specifically as a 1v1 AI), so I question whether it's the best AI to use for this tournament.

Additionally, Swarm-AI has been updated within the last few days and specifically says in the description that the latest update is designed for the Rainbow Cup tournament.

I'm just a little confused, are these 3 AIs going to be updated in the near future for the tournament?

As far as I am aware all 3 work fine on the current version of the game so should not need to be updated. The reasoning for the different AI's is depending on the map different ais are needed. Some maps are most suited to ais designed for 1v1 specifically whereas other ais are designed for larger maps and different styles.

@wingflier,
Good day and Thanks for the good questions.

DilliDalli will be used on mostly land maps, where it performs very well in the computer cup versus the other AI's.
(right now, DilliDalli does not make Water units, one of the new versions will eventually)
Every AI and map have been play tested numerous times to make sure the AI's behave acceptably.
And, although DilliDalli is self described as a 1v1 specialist,
it is very good at multi-player, in that it 'fully' utilizes 'full share' of units,
and after a ACU kill, it will transfer bldg's and units, and make use the units and factories.
Some of the other AI's do Not utilize the 'gifted' units or factories.
(Uveso also utilizes full share gifted units)

Swarm does mention the "Rainbow Cup" ... but if you read closely - It say's RC III .
Swarm is an excellent AI, and performed great in last years RCIII,
try it out and put in your rotation of AI to play,
but there was a conflict when it was loaded with RNG,
at time of tourney announcement .
The newest version released has fixed this,
but there was not enough time to play test and balance each individual map.

As far as updates:
(hints from dev's I've heard, with non specific date ranges - check the Dev's thread's on the AI-Development forum)

DilliDalli has new version "almost" ready,
but not before the tournament.

RNGAI is also in similar update phase,
one in works, but "no release" before the tournament.

Another very strong AI is M27,
but it was relatively new a few months ago when the Tourney was planned/announced.
The author is a very active Modder, and updates frequently.
Looking forward to see M27 compete in next years RCV.

Sorian Edit by Marlo! is also excellent and runs the performance tests at top rating.

Also check out the Loud Project - FAF client - by Sprouto, where:
Much of FAF Sup Com game core code has been changed to speed up play,
you can run 5,000+ units at normal speed, and on maps up to 80x80!
Works great for slower pc's!

Next tournament will be open to more AI's.

Hope you are able to watch the FAF Live Casts and observe the AI's in action!

Alright Our first round of draft picks have been completed.

Any players in the draft pool who would like their ratings updated,
make contact by PM'ing or in the Tourney Forum and I will update.

At the end of Draft round 2,
the players in the Standby pool will have their names listed
in order of the latest 'submitted' rating.

Broken mexes discovered in Map #5 Big Bang Mountain...( by unknown author) and
map has been replaced with Big Bang Dry (by original author)
If anyone discovers any other broken maps, please notify, thanks

The draft selection process has now been completed.
Congratulations to All who have been chosen.
Players not selected in the initial 2 draft rounds are now in the standby pool of players.
Standby players are eligible to substitute on any of the tournament days for players who do not show. 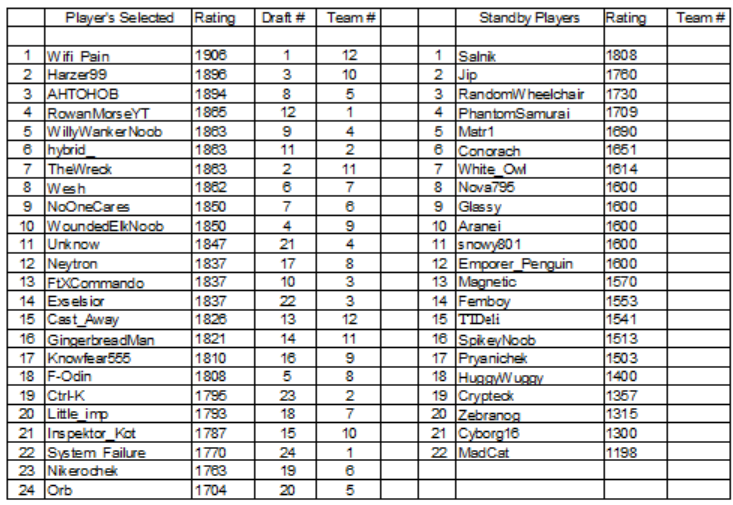 Good Luck to ALL our players and see you all soon!

Due to the high number of players who signed up for this Tournament,
and the many players who did not get an opportunity to play in this years event....

I have 2 Exciting announcements,
that will be made on Saturday Feb 26th,
during the RCIV FAF Live Cast.
One of which, will surely please some

No worries, watching the casts is probably more fun than playing! Looking forward to the event.

Players and Standby Pool,
We are only a couple of days away from the start of the Tournament.
Please be ready to 'LAUNCH' at 1600 UTC Saturday Feb 26.

A FAF client, irc chat room > #rainbow
will be set up a couple of hours before the tourney start,
to gather before hand,
and to report/update game, win/loss results thruout the day,
to keep the Challonge bracket as up to date as possible.
Challonge Bracket is here:
https://challonge.com/bb04n2q5

Players who are on the standby list,
please arrive in the room early and announce that you are available to substitute if necessary.

Teams, make sure that the player designated to "host" your games, is
thoroughly familiar with this tournaments specific rules and how to set up the game lobby/scenario's by reading:
Post #2: Team Colors, Mods, Options, Directions and Rules at the top of this thread, here:
https://forum.faforever.com/topic/3016/rainbow-cup-iv-3-v-3-1-2k/2

Game map/scenario's will be updated and uploaded a few hours before tourney start and
will be announced here on this thread,
on the Discord #rainbow-cup thread and
in the FAF client irc chat room #rainbow
(so be sure to double check map/scenario setup before you start:)

See you all soon!
Best o'Luck

3 team members are unable to play.
2 - 1st rounds picks, and 1 - 2nd round pick have withdrawn.
If anyone knows of any other changes to player availability status, please inform.
We will miss you guys, please return soon, safe and sound.

Here are the reformed teams and draft pool: 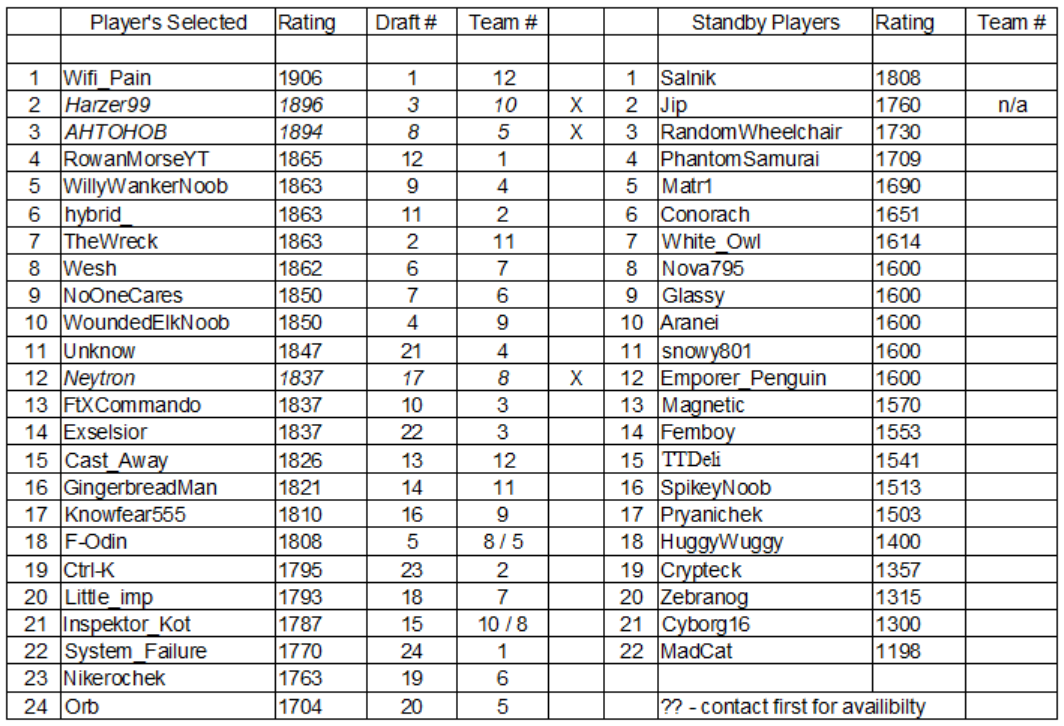 @matr1 Due to the current "situation" which caused multiple Drop Outs at the Same time.
The teams were consolidated,
so the 6 players who lost team mates were able to reform and keep a strong team.

If players had dropped out 1 at a time,
we would have 'filled' the positions 1 at time to keep all 12 teams 'full'.

We now have 11 teams,
with any future subs coming from the draft pool.

@matr1 I haven't heard anything.
I imagine anyone who would like to cast may?

Not sure if casting while in observer is acceptable?
Casting after games DL'ed to vault is preferred method,

Good Luck everyone.
and
keep our friends who withdrew last minute in your minds.
We will see them in next one