I'll ask anihilnine about uploading it to the FAF youtube, I don't have my own.

After a talk with some people I've decided to adjust the prize pool distribution and instead distribute the funds allotted for qualifiers into the top 16 for the official tournament.

So after the first qualifier, I've come to the unfortunate realization that it's not really going to be possible to micromanage players themselves while also casting the event. After talking with some people, it's more likely than not that the bottleneck for the event is going to be having people available to cast and ideally I'd like to have at least one consistent caster for the event. It's difficult for me to ensure that consistent caster exists unless it is, well, me.

Since I do not wish to put casting the event into the chance of fate and hope people will simply exist on the day to cast it, my only real options are:

If you have any interest in learning how to TD and helping me out, just send me a message on Discord/FAF/Forums and I'll let you know what you have to do.

This list will reflect your seeding in the Group Stage.

The second qualifier was played yesterday and it took about 8 hours to complete. 3 BO3s and BO5 final is far too much to be reasonably played in a single day. The format would be great if it was split over 2 days but it's a crazy format for a single day tournament, especially considering it is only a qualifier for the real thing.

I plan on making the final a BO3 and will likely be doing a BO1 for the RO16 where I choose some late game predisposed 10x10 map (badlands, twins, loki) for future qualifiers.

I’d really rather keep things to a single day rather than multiple for the qualifiers. Hard to ask people to reserve two days for the tournament (and I can’t even do that myself but that’s less of a problem now that I have assistant TDs).

The adjustment in games should lower the tournament time by 60-90 minutes which is closer to my intended target time.

To clarify some stuff about how the Official Tournament will end up going:

First, here is a layout of how Group Stage performance will result in placement for the RO8. 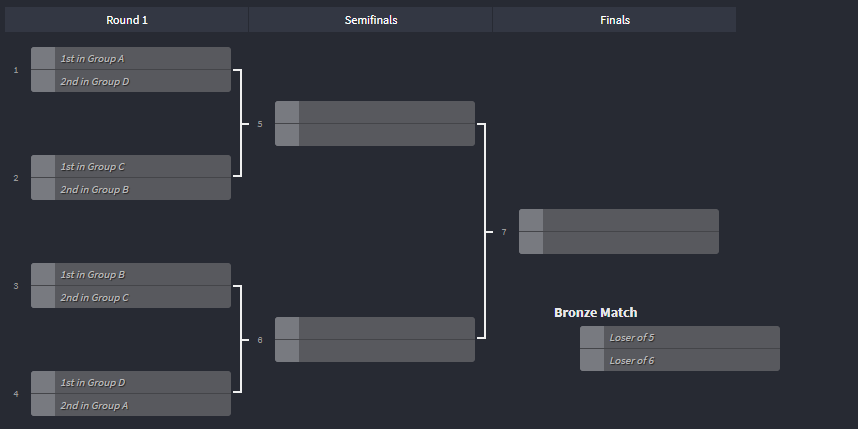 Second, as you should know, the Group Stage itself will be a round robin. This results in potential situations where ties can happen and where tiebreakers will be needed.

The first way to address ties will be by using point differentials. Essentially if someone is able to win 2-0, they will gain 2 point score differential in their group. If they win 2-1, they only get 1. If you have more point differential with a person you tied, you rank higher than them.

If points and overall performance are both tied, then a tiebreaker game will be used. There are two scenarios for this.

Then, the two other players will play a BO1 on a map that will be decided by the TD. Then, the winner gets the 2nd seed and the loser fails to move on.

In the case of a 2 way tie all that will happen is a BO1 game to determine who gets which seed.

I will be announcing group bracket maps after the final qualifier (not the sub qualifier). I will announce the maps for the RO8 tournament itself after that, unsure of the exact time as of yet.

Prep shouldn’t be discouraged, it’s what separates the best from the great. The tournament will operate with the same veto/choice system so prep will still involve a strong knowledge base of a good quantity of maps.

The Group Brackets are finalized. Subs will be able to fill in if people fail to show up/resign prior to the tourney date. A reminder that if you forfeit your placement in the tournament, you also forfeit your ability to claim your piece of the prizepool.

People that have made it into the Groups can give me 6 maps that they would like to play in the Group Stage through PM on FAF/Discord/Forums. I will take their preferences into account while making the 15 maps. However, I need the map picks by this Wednesday.

In addition, I'm still looking for 1-2 additional TDs that could help manage the group stages. If you have an interest, message me. You will be responsible for keeping track of the faction picks and map picks of the 4 players in a specific group.

So some final adjustments to the tournament format following some realizations during the qualifiers:

If you’re a player, feel free to kick them before the game begins, though I know it’s hard to tell who is and isn’t a caster so the burden isn’t on you.

In addition, I should announce maps sometime later today when I get home.

So some final adjustments to the tournament format following some realizations during the qualifiers:

If you’re a player, feel free to kick them before the game begins, though I know it’s hard to tell who is and isn’t a caster so the burden isn’t on you.

@FtXCommando I might be misunderstanding the situation, but if we really are having this kind of issue, wouldn't this be easily solved by just having the games be password protected?

It’s a solution, just really annoying as now players need to be pm’d by casters, need to pm opponent, games could launch without a caster by accident (already a thing without passworded games)