Welcome to the Group Stage for the 2021 Fall Invitational. This stage will be made up with 4 groups of 4 players each. Games will be played round robin style with each player in a group playing each other player in a BO3. The top 2 players in each group will advance to the playoffs. 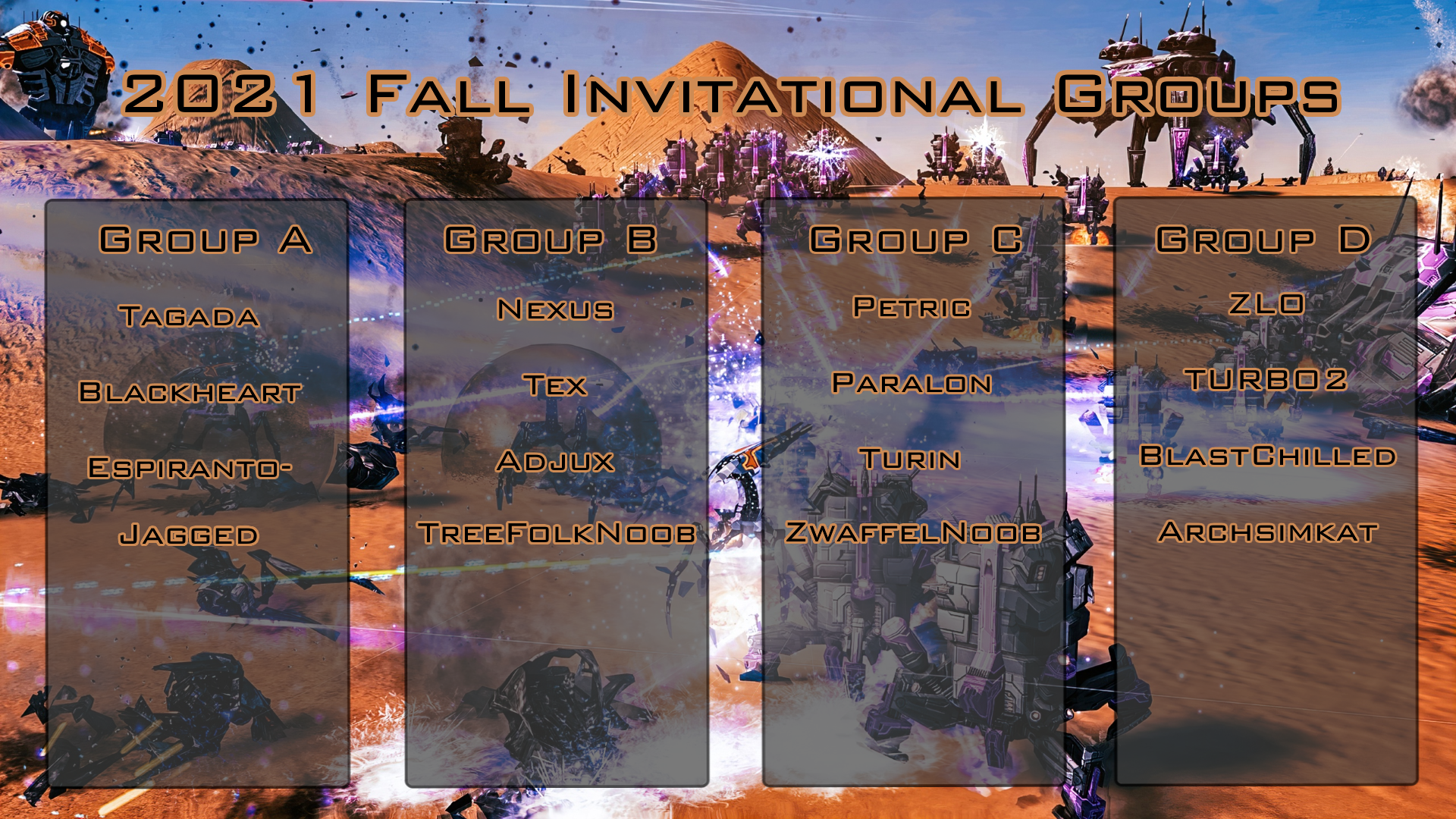 There is a pool of 11 maps and maps will be selected using a veto and pick system. This means each player has 2 vetos, with the lower seed in the group vetoing first in an alternating pattern.(ie lower seed, upper seed, lower seed, upper seed). Next the higher seed will select the first map, the lower seed the second map, and if necessary the higher seed will select the third map. 5 of the maps are the same for each group and 6 maps are different for each group.

We will be using the same faction veto system as used in LoTS and in previous invitationals. After a map is picked, both players will secretly send 2 factions, in order of preference, that they would like to play, and 1 faction they would like to veto to their group's Tournament Director.

For mapgen, both players can enter the lobby and view the map prior to sending in their vetoes.

The map pool and the TDs for the groups have been posted.

Why did you have higher seed pick the 3rd map rather than just vetoing down to it like normally?

2 main reasons: the first is that it creates a disincentive to intentionally throw games or manipulating the bracket to end up in a different bracket/group. By creating a small, but concrete advantage to being a higher seed, it ensures that players are always incentivized to aim for the highest possible seeding position. This helps to avoid some situations we've seen in past LotS tournaments where players intentionally try to manipulate the groups.

The second is that giving the last pick to the high seed rather than vetoing down to the last map is that it is speeds up the tournament by not having to do a bunch of vetoes before the last game. I expect this saves about 1-2 minutes compared to the alternative, and while this isn't huge it contributes to less downtime on the stream.

I understand the disadvantages to creating a system that is intentionally biased towards the high seeds: it's unfair to the lower seeds and discourages upset results. I'm comfortable doing this because the advantage isn't terribly huge, letting the high seed pick the last map from the remaining 5 maps of the 11 map pool after a tiebreaker map will only affect cases where player skill is already very similar and other sources of variance are likely larger than the map pick.

2 players, treefolknoob and zwaffelnoob, have notified me that they won't be able to play the Group Stage. Subs will be slotted in to replace them and anyone else who can't make it the day of the tournament based on snake seeding order.

What, you dont want a group with BH tagada and espi?

espi will win the tournament, no matter what the groups will be

Congrats to Tagada, Espiranto-, Adjux, Nexus, Turin, Paralon, and ZLO for advancing to the playoffs next week! There were some pretty incredible upsets including Turin winning Group C 3-0 and Adjux taking a series off Nexus 2-0 to win Group B!

Thanks to my co-host farms for casting with me of twitch.tv/faflive. We reached 159 peak viewers and 116 average viewers, a record for a Seasonal Group Stage stream!

Thanks to my great Tournament Directors HintHunter and f1lthycasual, this event wouldn't have been possible without you!

And thank you to all the other players, donators, and viewers who made this tournament possible.

Players advancing to the playoffs please send me your map submission ASAP! I have only received it from Paralon so far, if you sent it via FAF I may not have received it due to the token logout bug, please send it via discord.

There were two issues that cropped up during the tournament that I need to address.

First, Jagged and Blackheart both appear to have forfeited vs each other. As TD I'm going to rule that because of this they tied for 4th place in their group. The prize money that would've gone to 3rd place will be redistributed to higher prizes.

Second, archsimkat and TURBO2 both perfectly tied for 2nd place in Group D. There are two tiebreaker ways to settle this, total win-loss: where archsimkat would advance and seed position: where turbo would advance. Neither method is specified in the tournament rules, so it doesn't seem fair for me to rule by fiat one way or the other. To resolve this, I have asked both of the players to play a BO1 to determine 2nd vs 3rd place in Group D in the next two days, expect updates to follow.

Update: due to timezone issues, TURBO and arch will play their BO1 at 14:00 utc immediately before the playoffs on Saturday.