@ftxcommando Why do you think that changing the Aurora to be an actual medium tank is not helpful if its old role is still fulfilled by another unit?

Because I implicitly assume that ruining faction diversity is bad and I am against adding new units. If you make Aeon have a tank and no lab, they are garbage competitively, therefore, the only option is adding a totally new unit which goes against the initial principle of making Aeon easier for new players because now they need to balance two units. I know they need to balance two units because Aeon is already strong on t1 stage and adding a new unit is only justifiable if you nerf other aspects of the roster read: aurora, requiring them to do complex unit mixes to be relevant to the game.

"oh if Aeon is garbage without lab then that balances it out" Except making the game turn into "cripple the Aeon player by min 4 or lose" is not good and also yet again brutalizes newer players.

aurora can win a 3v3 if you move them back just before the enemy tanks come in range (which only requires you to have a scout with the auroras and a little attention (while still easily having 2 survive...).
also I dont see where you get the idea from that auroras cannot raid. especially if you have sth like a 3 aurora+1 scout group raiding in the back they can be an actual pain to chase down due to their superior range (especially if you chasing units will start moving in a line...).
also where did new players come from? this is about low/mid rated players. for new players the only priority is getting more than 2 landfacs spaming, expanding out of the core base and not stalling e the entire game.
for a replay demonstration look at #15497168. its litterally 1 click for the auroras, causing them to trade godlike.

Auroras almost always miss their first volley for some reason in my experience, which can be very bad because getting the first alpha strike is important for Aeon. Could we make Auroras more accurate while slightly lowering their DPS?

@zeldafanboy Could you get some video of that "first shot miss" thing. Because as they are the slower unit being able to get the first shot in is one of their advantages.

@Rezy-Noob This thread was forked from another about why so few people play Aeon, and the lite consensus there was "The Aurora."

I expanded the motivation section in the first post, and also moved the unit stats there (slight tweak since I realised the range must not exceed T1 PD).

for a replay demonstration look at #15497168. its litterally 1 click for the auroras, causing them to trade godlike.

Thanks for the replay Turin. I have two things to say:

for that you can position the auroras a bit in front of the spot you want to defend, so you can kite back without losing anything relevant. also your entire argumentation assumes that a low/mid rated players main issue is bad micro/lacking attention, while it often enough is weak ecobalance+expanding, with too much micro often being a reason for these issues. also the comparison with snipers is completely off, since you cannot just say unit x has 146% more range than unit y. what matters is the amount of time the unit B takes to pass the distance to unit A , which on t1 is maybe 2 seconds (and also the time if unit A kites after a reaction time of a few seconds), while a Harb/brick/percy will take way longer untill it can shoot a sniper.
Snipers and auroras fullfill so obviously very different roles, that this comparison made here shows you the weakness in your argumentation and why simple stat comparisons are insufficient.

Snipers and auroras fullfill so obviously very different roles, that this comparison made here shows you the weakness in your argumentation and why simple stat comparisons are insufficient.

Come on, that's obvious. They're different tiers. Yet Aurora can assist an ACU in a way that other T1 tanks can't quite so well. Okay, "sniper tank" is a bad descriptor. (I did want to also increase Aurora range, yet letting them out-range T1 PD seems a bad idea.)

Bricks & Percies are slow siege tanks. T2 tanks would be a better comparator to a sniper if not for the range.

This can also be seen as an argument against my proposal since reducing DPS and adding multiple tank types may require more micro. (Besides that adding a T1 tank would make Aurora partially redundant.)

Totally agree, that it is easy to micro a group of Auroras against enemy tank-group, when there are no othe units/buildings in the game. And even more, if enemy kills his units in most favorable way for you.

But if you move your units forward, enemy might push his units too, and if you do not react perfectly fast, he will get in range and crush (if small amount of units). And if you kite, enemy probably will pull back his units, even if second later might try to follow your units outside of range. And if you move forward... Micro continues. This is micro for both sides, but mistakes are much more expensive for Aeon. And so precision needs to be more important, and so it is harder than for other nations. Also other nations have t1 arty that can shoot in all directions while maneuvering.

Still, it is "so easy". But it starts to get less easy when you have a big open map, with many-many tank-groups, that all need "only little attention", all the time. While mouving back one group might mean that another one gets encircled or you lose a strategic position. While you need to scaut to not get cut off. While you need to pay for landscauts, and avoid them getting far in front. While you need to manage eco in large space and not only win air, but have active air control, to kill bombers before they drop bombs. etc.

The fact that low/mid rated players have other issues also, does not enter in consideration on this subject, as they have those problems with all nations. But the need to avoid enemy tanks and planes getting close all the time, in all places, they have this problem only with Aeon.

On t1 sniper level... If Aeon gets more or less equal t1 tank to other nations, I dont really see why one nation should have t1 sniper, while other nations do not.

But I have some difficulties to believe, that Aeon is less played/liked than other nations, only because it is too strong...

If the argument is that Aeon is less played because it is weak (which is what your last sentence seems to be saying?) then you would expect Aeon to decrease in popularity as you increase in rating as faction differences matter more and more as ratings increase. However, you see the exact opposite trend for Aeon meaning that the faction pick rate has basically nothing to do with how strong the faction is at lower levels. Faction is basically never the reason you lost the game if you're under around 1500, some would extend it even higher. Maybe if you constantly play Seraphim v Cybran on Sludge you could have an argument.

Instead here are 3 reasons Cybran is more often picked than Aeon based on my reading of comments in casts and generic new player discussions:

@ftxcommando Also they have the cool lasers.

Isn't Terran the most popular faction at low levels in SC2 even though they require the most unit micro? Which is apparently the theory for why Aeon is not popular here? It's literally just noobs liking the aesthetics of factions man.

Not to mention that Aeon and Seraphim have near identical play rates as I said in the other thread and no one here is arguing that Seraphim requires some high IQ unit babysitting to win games nor that Seraphim is weak. Ask low rated players why they don't play Seraphim and they'll tell you the faction looks funny and weird.

I think you overrate the impact of aesthetics a bit. It can have some effect but since they are subjective it's hard to quantify the contribution they make to what factions people play.

When you say Seraphim and Aeon have "near identical play rates" are you talking about team games or ladder? Because in my experience Seraphim is way more common on ladder than Aeon.

"because the argument that Aeon is strong yet unpopular makes no sense."

But weak or strong is a false dichotomy. I would say that overall each of the four factions is roughly equal strength. However, it is more complicated to use the full strength of the Aeon faction compared to say, Thaam and Zthuee spam into Illshavoh spam rallied to wherever the enemy is.

Seraphim having the same play rate as Aeon seems odd to me but idk I don't have the analytics. Also I'm about 900 ladder so maybe that skews it. 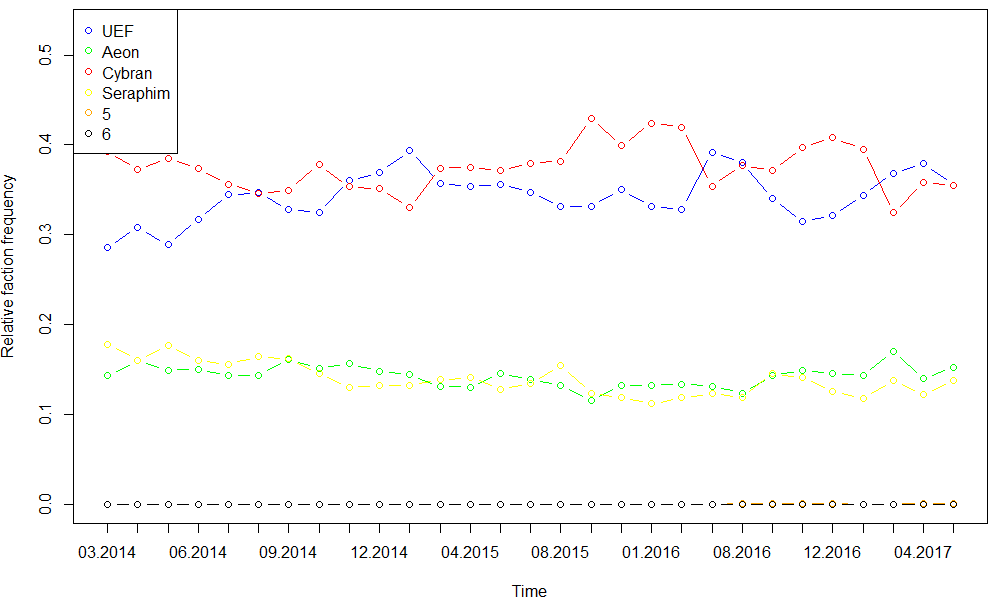 You see more volatility at the top because there are fewer players and so singular preferences make a larger impact but also because those singular preferences are much more likely to be guided by balance updates. An aggregate across the whole playerbase does not give a single shit about balance and instead showcases more banal realities ie base faction preferences around things like aesthetics.

It does not show that a faction is clearly weak as a mean or anything like that because you can clearly see several months where Aeon was either the most or 2nd most popular faction at the top of the ladder.

It also refutes this narrative about "skill cap" or whatever because Seraphim is really not any higher in skill cap than UEF. UEF had tons of noob trap units until around 2019 (mongoose, titan) and Seraphim had a terrible t3 stage until 2019. That's about it really.

If you're curious, 5 is random and 6 is nomads, no idea why random doesn't get picked up for ladder.