This topic has been deleted. Only users with topic management privileges can see it.
last edited by
2
T
Tagada
Balance Team

@blackheart said in Downsides of the Advanced Strategic Icons mod:

(...) just as I'm waiting (since 2013) for any new generation of top players at all. For some odd reason it has not happened yet, but I'm sure the next 8 years will be different.

@biass said in Downsides of the Advanced Strategic Icons mod:

When you plateau as a 1200 in ladder, please come back to this discussion and consider again why this might be a detriment to your understanding.

I use the ASI on medium and I'm 1400 ladder so, let me know when I'm going to plateau bb

Also, I don't believe the icon mods will make anyone better or worse. It's just a matter of perception to me since, the icons only change what we can or can't see. It won't make me change my BO, make my units move more effectively or spend my resources better.

Yes, I understand that maybe you might miss / not be able to gather information about that mixed army comp. However, I feel that the same can be said that the mod might make you not miss certain things/units/tech transitions.

At the end of the day, I hope I keep climbing so I can prove how far one can reach with ASI.

@blackheart said in Downsides of the Advanced Strategic Icons mod:

Since you had the courtesy of quoting me, ill respond:

The quote from my UI mod guide is "Advanced Strategic Icons: Extremely strong NOT recommended. I would go as far as saying that this mod will completely destroy your ability to improve past a certain level."

In the intro to my guide I write the following: "my focus will be the importance and the impact of those mods on your improvement in 1v1".

Why does your post then keep going on and on about some senton lategame that my post is clearly not intended to care about? Frankly, I dont give a rats ass if there are senton mods that make you perform better on sentons, thats why I didnt got into details about certain eco sharing mods etc. (remember that sentons and 1v1 has basically 0 common ground) The "certain level" I mentioned is also not something low like 1500, 1900, whatever 1v1 rating, since the competition and level of play here is low enough for icon mod differences not to be the deciding factor for a long time. Why I wrote it so strongly is that if you get used to it early on, you wont want to switch to something else once it starts mattering. Choosing the right setup at the beginning has great advantage once you climb really high.

As some others have responded, and as I have myself in the UI mod guide thread, on high level 1v1 it matters exceedingly much to be able to quickly see, target, and analyze unit comps or base structure comps of your opponent. If a mod obfuscates that my opponents mixed army (any army at t3 stage will be mixed in a 1v1) has a t3 mobile arty in it and a t3 MML, its garbage. If a mod obfuscates that the firebase has a misplaced massfab next to a radar cause the radar icon for some reason suffers from obesity, it is garbage.

Yeah that is the most common argument against the mod that I have read and, with the help of FTX above + some good reference pictures, I can now at least understand why it can make reading dense base layouts more difficult.

If you have the time, could you post a comparison picture of the same thing happening to armies? It would give future icon mod makers a great starting point off what to avoid.

Thats the reason why for example myself & petric and some other top players use private mods. Personally I use a very subtle highlighting for SMD/SML/TML/TMD icons. Your assumption that we are afraid of useful UI layout choices is not correct, its just that the strategic icon mod isnt useful for a good 1v1 player.

That you do use different SMD/SML/TML/TMD icons is very interesting though. That you do is of course neither a point for nor against ASI but if nothing else, thanks for sharing that!

Then to clear up some confusion or fear that I think I am seeing in your post: The small icon version of the icon mod wont stop you from being good at sentons, no worries. The things it damages are mostly not relevant to sentons, and probably the small benefits offset the damage on sentons. My UI mod post however was aimed at being good at 1v1 and being good at FA in general, neither of which senton has any correlation with. In general, if you are confident that its good for you, just keep using it. If you arent sure, just dont use it, not a complex decision.

My main motivation for this post was that I wanted to know if I could recommend the mod to any new players asking questions cause, even if it helped me to get a grip on the icons a lot quicker, I don't want to hamstring their growth in the long term.

Yet, now being semi-competent on Sentons I never really saw the downsides, only the upsides of the mod, while it was also being trashed with a fervor that I haven't seen for any other mod in the game.

Why did I choose seton pictures as a comparison then? Cause those were the games I had lying around and I assumed it would be reasonable test case. Seemingly that was one of the things that "I didn't get".

If you have the time to make some additional comparison pictures that show the downsides of using the mod, especially for armies, I would love to see them!

As mentioned above, I think it would be good to collect all that information here so that future icon mod makes can have something to build off on

I too want a larger FAF playerbase

While it's personal preference I don't think we should be nudging new players to use this mod. I think that after the next patch we should maybe look into upgrading the basic icons and maybe incorporating some of ASI ones (Nuke, SMD) and making the new icon set optional (toggleable in the options).

@tagada Yeah I haven't recommend the mod to any new players cause I was always under the suspicion that I might be wrong.
Also its an external .exe installer, which always seems very suspicuous..

Having a "more distinct strategic icons" settings in the menu would be great!

I would recommend the mod to every new player. The game is unreadable / very exhausting without easy to see icons. Does a new player need to know the difference between a comp with 1 pillar or moongoose? I think we should make the game as nice as possible for them.

This is the part where Brutus busts down the wall, chambers a round as the dust settles, and tells the shocked crowd that we should not pay for dev/design work.

We do need to make the game as nice as possible for new players that's why we bully any dude that posts a screenshot with the mod relentlessly. 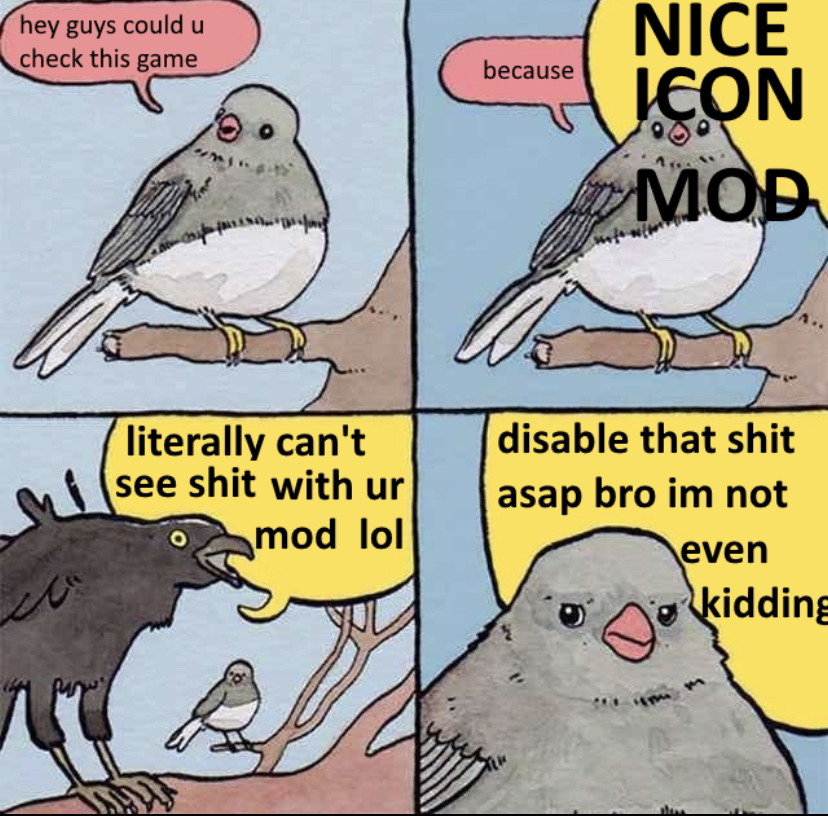 Please don't recommend the icon mod to new players, whatever you do. If people have played for a while and they want to switch, whatever. If they are not even used to the default icons do not suggest they switch because you personally like them.

@archsimkat said in Downsides of the Advanced Strategic Icons mod:

This is the part where Brutus busts down the wall, chambers a round as the dust settles, and tells the shocked crowd that we should not pay for dev/design work.

Brutus as the Kool-Aid Man is a funny mental picture

But I do remember him having some good arguments for not paying for that stuff.

How about hiring an outside designer to collaborate with our FAF internal designers?

This is probably the wrong post to discuss that, and we are getting a bit off topic, but its worth keeping in mind nonetheless

I don't like either the defaults or the advanced icon to be honest.

I want an icon mod with:

Must haves:
differentiates between ACU's and SACU's
Prominently displays smd

Nice to haves:
Has some subtle difference between t1,t2 and t3 units
Differentiate between mobile arty and direct assault
Highlight tml and tmd

None of Brutus arguments for paying for dev features hold for something like paying someone to entirely change icons except for the idea that everyone that devs/does literally anything for FAF will stop because they will want to be paid just as that dude was paid. In which case, how do we rationally explain any caster existing since Gyle is getting paid 1500 a month to dump like one cast a week. Or how do we explain anybody even working on FAF since you can easily go and get paid to dev at like, a job, or freelance work.

You need a reputable dude that has a solid basis in design that ideally cares about FAF, and the money is there to keep in involved in a long-term project which something like icon design is going to be. Not really hard to determine when the person has "fulfilled his job" nor does it involve knowing 6 billion different systems to accomplish.

Absolutely do not do this.

@ftxcommando Its something to be discussed for sure, but probably not here.
Information always gets lost in those mega threads and that benefits no-one.

@biass said in Downsides of the Advanced Strategic Icons mod:

Absolutely do not do this.

Hmm. How about an icon contest with like 5 previously selected entrees where everyone gets paid afterwards, the winner just gets paid more?

Actually that's just the same as hiring 5 designers but with more steps..

How do you make an icon mod anyway? It seems the icons are stored in "Textures.nmd". What do you use to alter this file?

Random "fixes" like this only matter to the people who are/would never do the work in the first place. Otherwise you would realise that this is completely out of any reasonable project scope.

If you're going to hire someone, (which none of you are)
Focus on making the client UX better, or fixing up the webpage that STILL has sc2 images.

@biass Changing the game icons is out of any reasonable scope? Why?

The ASI guy literally proved that it could be done, albeit there is still much to improve there of course.

Also it matters to quite a lot of the most involved and contributing community members. See for example Jip above who has put in at least like 2 months of full time work improving the game, or any of the people here who are sitting on various unpaid council/admin positions out of their own good will. If their voice doesn't count, whose does?