That's right. But I don't think it really makes any difference. What do you expect to see? I expect to see basically the same graph again, with more noise, because these metrics are correlated. You can't have all players be the exact same rating when you have a big rating disparity between the two teams.

Having hard limits on skill differences at the different rating levels would be what I would want to see. Should just take a few if functions...

Based on the highest rated player in the game:

As a first pass, obviously be adjusted depending on results and such.

You are the first person I've ever seen to suggest that the difference between a 2200 and 2300 player is less than a 700 and 800 btw; I actually misread your first post because I thought it was the classic post that everyone below 1000 is the same skill level.

Also, these suggestions would make you match with an even larger difference than what currently exists. It would basically double the search range for 1500 players. Or are you suggesting that teammates can only be within these rating limits? In which case I don't understand these rating limit brackets.

Also, these suggestions would make you match with an even larger difference than what currently exists.

This is demonstrably untrue because these limits can only prevent games with large skill differences: impossible to produce more... My suggestion is the imposition of hard limits where currently none exist. I cannot even begin to try and untagle what you think I am suggesting...

I'm still interested in your explanation for this.
Also it would really make the discussion easier if you replied to more than one question per post.

For higest rated player less than 1000: no limit is as it currently is. Effectively no change. Its so hard to determine accurately skill in this bracket that I think its fine.

Note that in this example rating disparity will be zero and alone would be an indication of high quality or balanced game. Which is why I recommended in my previous post as to looking at these metrics together and shoult not be seperated. Rating disparity and skill differences do not neccessarily increase together but could be largely indpendent of each other.

For highest rated player of 2000 or more being matched with a 1200, I think could still result in a viable game. You can generally expect a 1200 to be independent and contribute to a fight in a meaningful way right up to the t4 stage of a game.

Matching a 2000 with a 300 I think will just result in a bad gaming experience for everyone and discourage people from searching tmm. It has for me. Which is why I am suggesting a hard limit on skill difference.

I am much less interested on what the numbers actually should be. I don't know what they should be. But I certainly think that if they are allowed to be too large, whatever too large is, that will just produce games that people will not want to play.

And how many 2000 rated players have you talked to for their opinion on 1200s? Because I promise you they view them even worse than how you seem to be viewing 700s. Plenty of 2k players refuse to play lobbies with rating minimums below 1.8k.

It literally makes zero sense for rating disparity and skill difference to not be correlated. To be 200 points above 2000 or 200 requires the exact same level of “skill” beyond 2000 or 200 to consistently beat those levels and maintain your rating. The only difference here is that 200s have higher deviation in general.

All the more reason to use a hard limit on skill difference. This has been my main point the entire time. I really don't need to have it parrotted back to me as if I don't understand something.

But you don't like my numbers or reasons, FINE. Fix it or don't fix it: I am done here.

Honestly @BlackYps that sounds like good work. I've partly given up playing 2v2 due to bad experiences, but will have to try some more.

Slightly off topic: will the 3v3 and 4v4 queues share the 2v2 ratings or use new ratings? I can see why 1v1, 2v2 and global use separate ratings (team communication/coordination being a separate skill, and half of global games being gap/setons/canis), but TMM games are probably similar enough to share ratings?

I’m not 100% up to date on what the plans for ratings are but afaik, 4v4 will definitely have a different rating, and 3v3 will get bundled in with either the 4v4 one or the 2v2 one. There will also be a queue that uses global rating.

Last night's game (https://replay.faforever.com/15370273) showed another issue with the TMM ratings: my opponents were both rated around 580. In reality, one was a much better player than the other; presumably they always played 2v2 together thus always won/lost (rating) together. Perhaps one could call the result "balanced" (1248 + 16 vs 580 + 584), but their ratings still massively misrepresented the players (the better of the two is 985 on 1v1 and 1100 on global, the other ~500 on global).

People having inaccurate ratings is a problem that the matchmaker can't do anything about.
For specific players it should go away over time when they play more.

@cyborg16 I thought this too... After being initialized at the wrong rating and then playing always with the same friend I feared I was still massively overrated. I am 1100 he was 600

Somehow though, my winrate is pretty close to 50% when queuing up solo. Apparently I really am as good in 2v2 as my rating suggest (now at least).

my opponents were both rated around 580. In reality, one was a much better player than the other; presumably they always played 2v2 together thus always won/lost (rating) together

Yeah no rating system in the world can really fix that (if they indeed always play together), unless it measures other things than win/loss, which would open the door to people trying to game the rating system (potentially grieving their teammates to gain points) instead of trying to win.

Inaccuracy is built into prebuilt teams. If we wanted a perfect system you would prohibit premade teams, but that’s a less fun experience for lots of people.

The server update on Friday fixed the bugs I mentioned earlier in the thread. So from now on you shouldn't see games with extreme imbalances anymore.

Just got 2vs1 TMM game 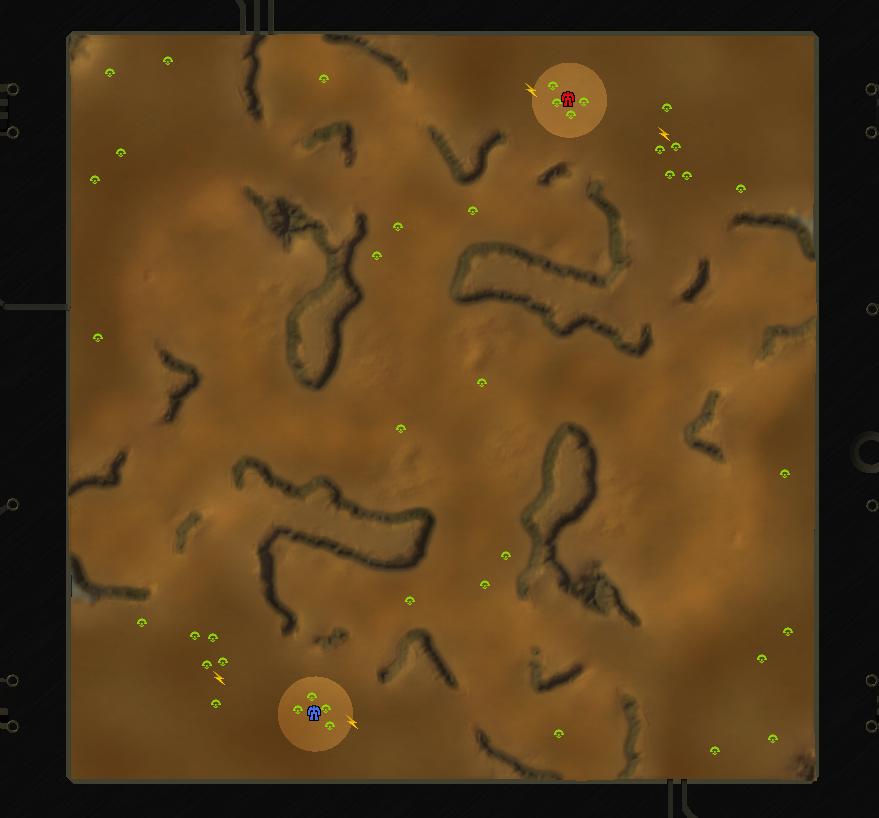 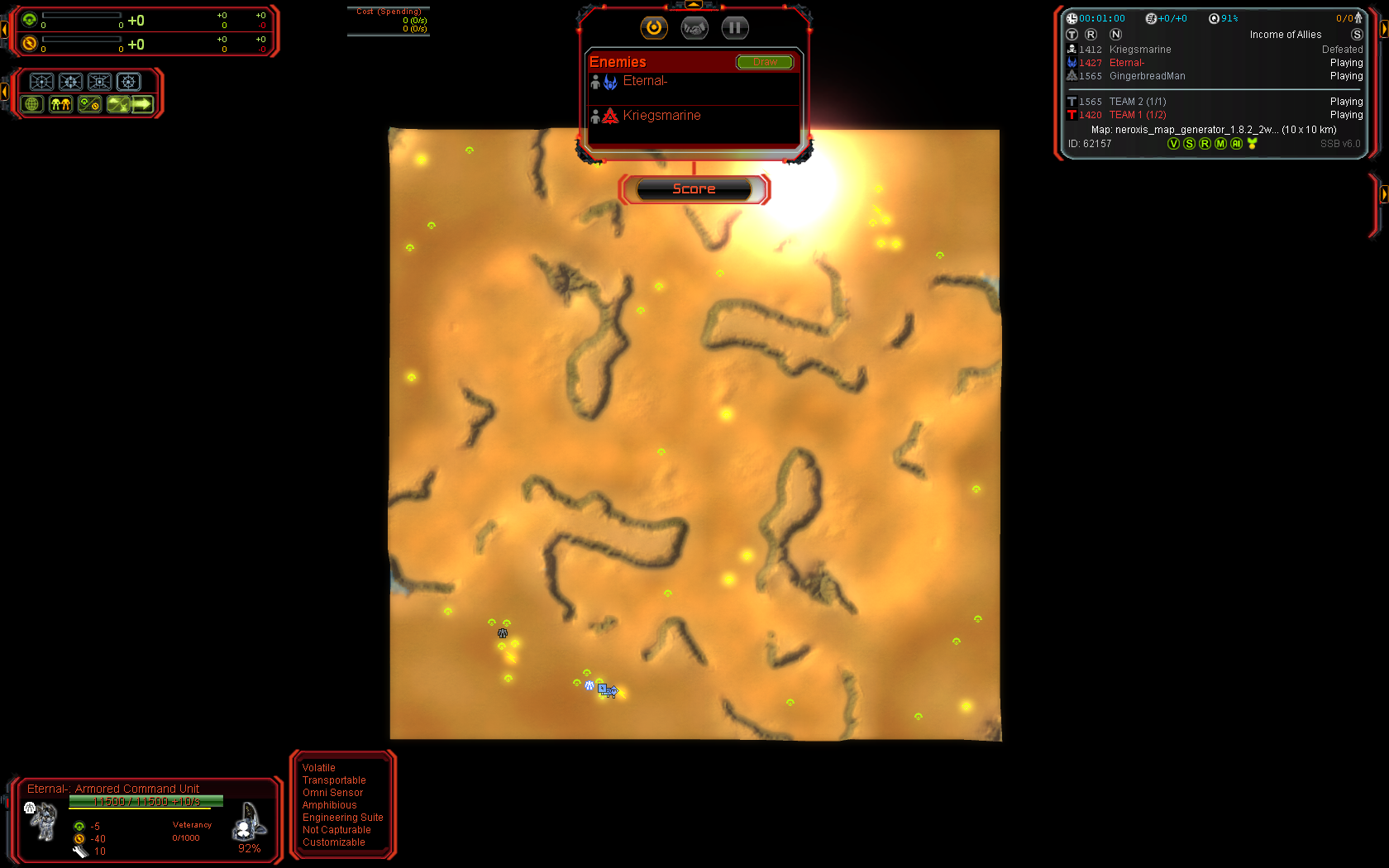 Is there anything being done further in regards to the map chosen is biased towards maps on the lower rating player’s pool?

@Morax I asked you about this before making the last server release. You told me to leave it as is.