This is a sub-topic of this topic. Please keep this topic clean and only talk about this one specific issue. In this case, the balance will be changed slightly.

This specific topic is about tactical missiles

Missiles used to track their target in Supreme Commander (not Forged Alliance). As a result, the turn rate was adjusted as the missile got closer. At some point this would happen every 1 - 3 ticks, depending on the missile. A single cruiser firing missiles can therefore easily cause a dozen of these calls happening each tic. Think about those moments when you have an armada of cruisers firing in your Seton bay firing at the middle position because the rock player lost from the beach player.

In Forged Alliance the tracking of a target was removed because it appeared to be overpowered. The problem is that all the tracking logic is still applied - they did not refactor the code responsible for that. Instead, they just switched a toggle somewhere.

As soon as the tactical missile is in a straight line all future turn rate changes are a waste of execution time.

For those interested, this is an example of the code that is being executed:

Note that at some point the missile is checked every 4 ticks.

My propose to the solution is to set the turn rate once depending on distance. This prevents the entire thread being made all together. It also prevents a lot of engine calls and distance computations. But, the missile arc will be slightly different. This is where the balance is impacted.

We'd also need to re-evaluate how Aeon T2 TMD interacts with missiles. The final behavior should be similar to the original behavior.

My question is: is it worth changing the arc slightly in order to have a simplified, more performant implementation?

I have not worked out how much this would save in terms of sim time- I'd like to hear people's opinion about it first. Just remember that any code that does nothing costs cycles that we should spent on code that actually matters - like pinging your ally on Rock that he should've made more frigates early on.

I have seen discussion on making some missiles homing again a few times.

Yes - people can add their own scripts to the missiles that make them follow the targets again.

The zig-zagging is applied in the engine, see also this blueprint value:

Seems like a pretty clear cut thing. Wasted engine calls and computations should be removed. Even if it changes the balance a little bit, I'm sure it can be tweaked to be as close to normal as possible and then we can simply get used to the new change. A lot of games, at least with navy like Setons end up with a ton of tac missiles. I wouldn't be surprised if it hits performance quite a bit.

I'll do a proper investigation into the hit on the sim later today.

Could you post a comparison screenshot of the difference in missile arc?

@blackheart I'll make sure to add that in too. The screenshots that I'll provide will be just a draft - it will require some tinkering in the long haul.

Initial investigations with intended changes show a difference of 0.5ms - 1.0ms for 25 UEF cruisers firing. I have a fast processor, so this is easily 1ms - 2ms for a laptop. It is not significant, but a quick water drip reduction in a large bucket called the sim. 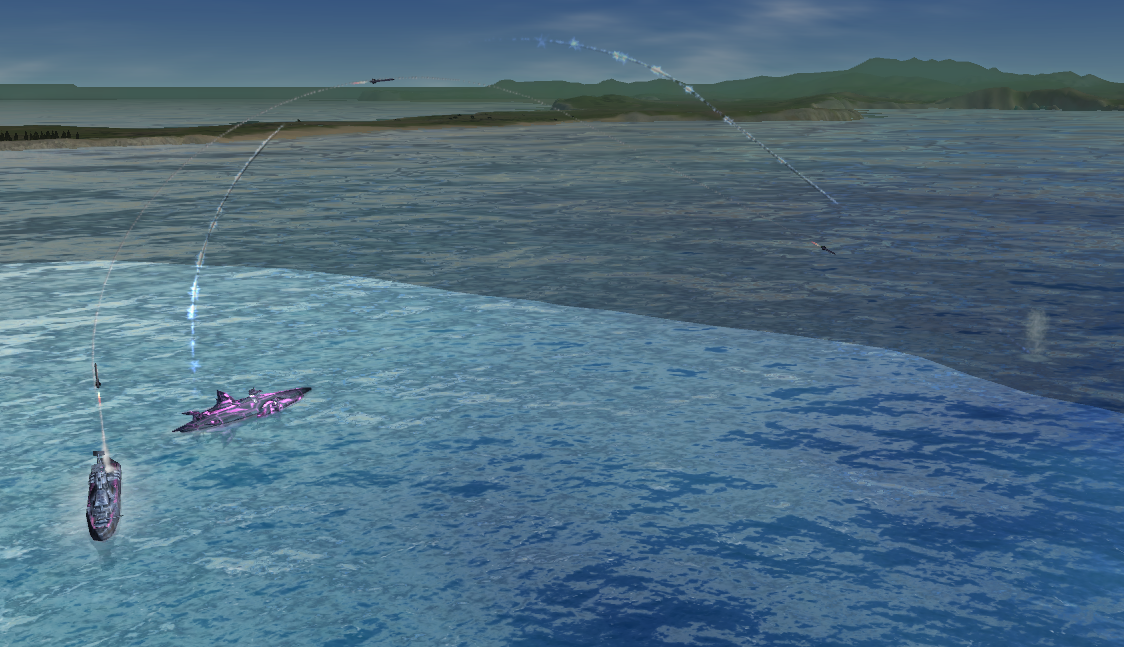 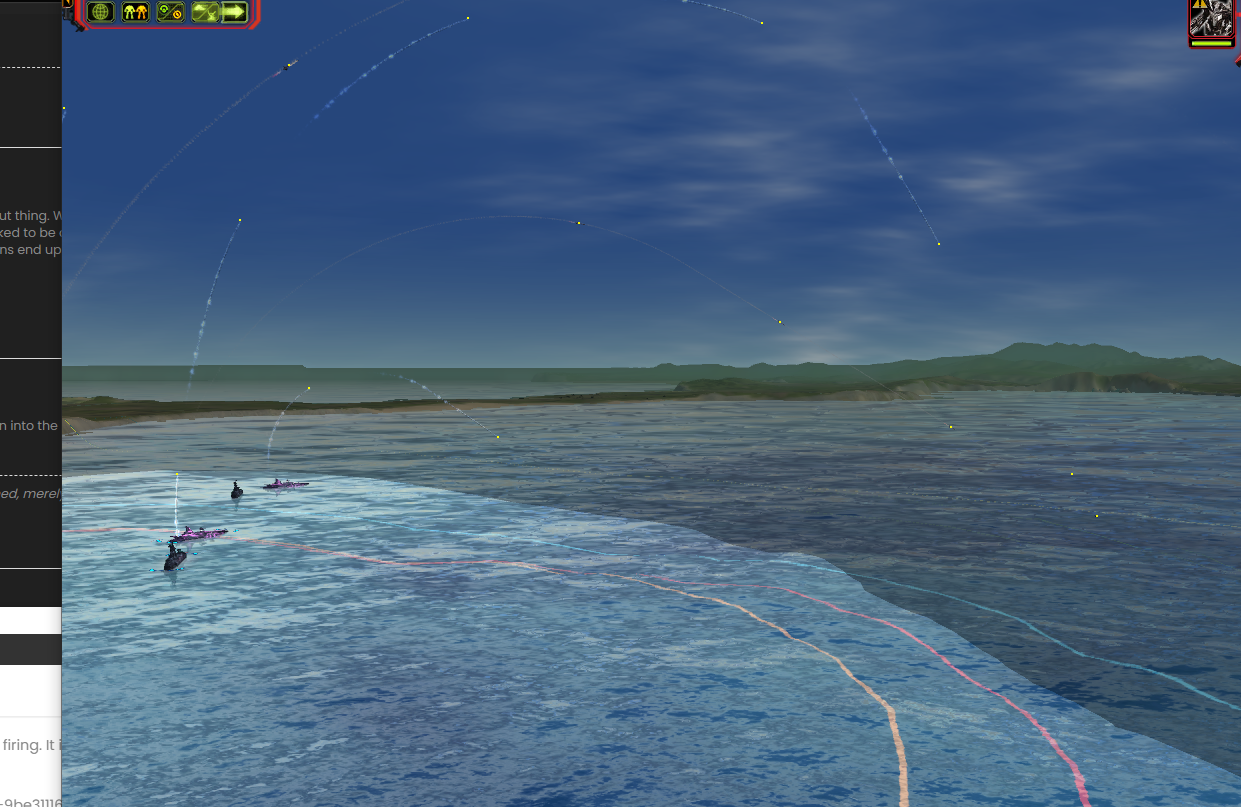 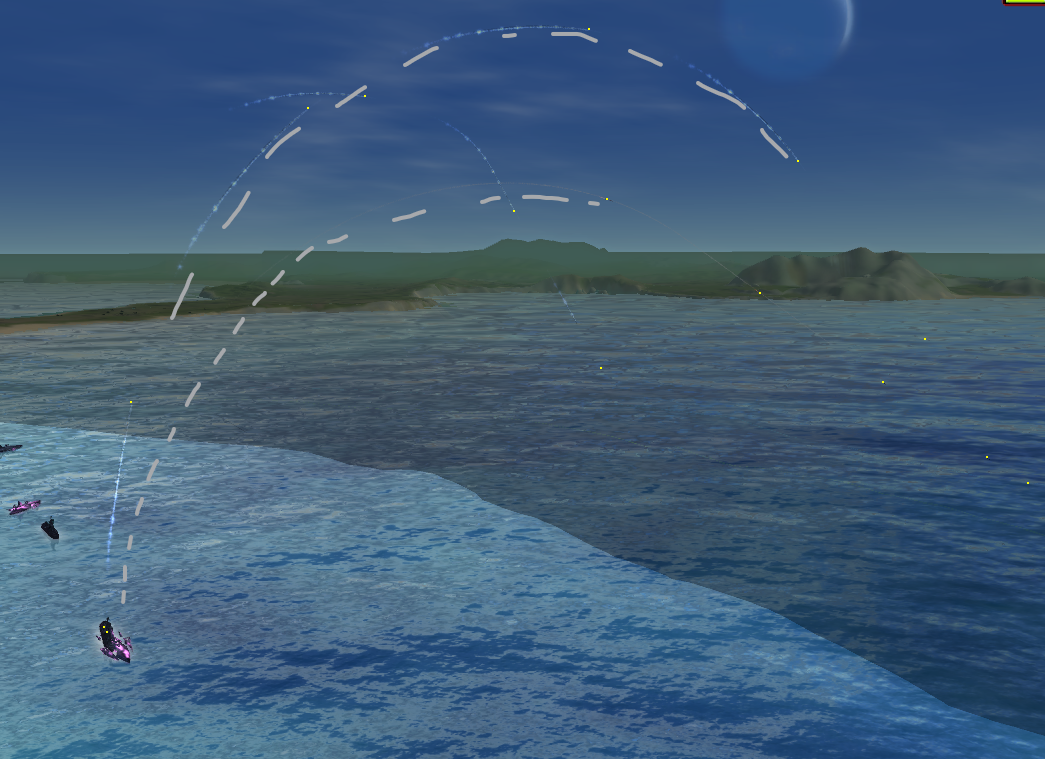 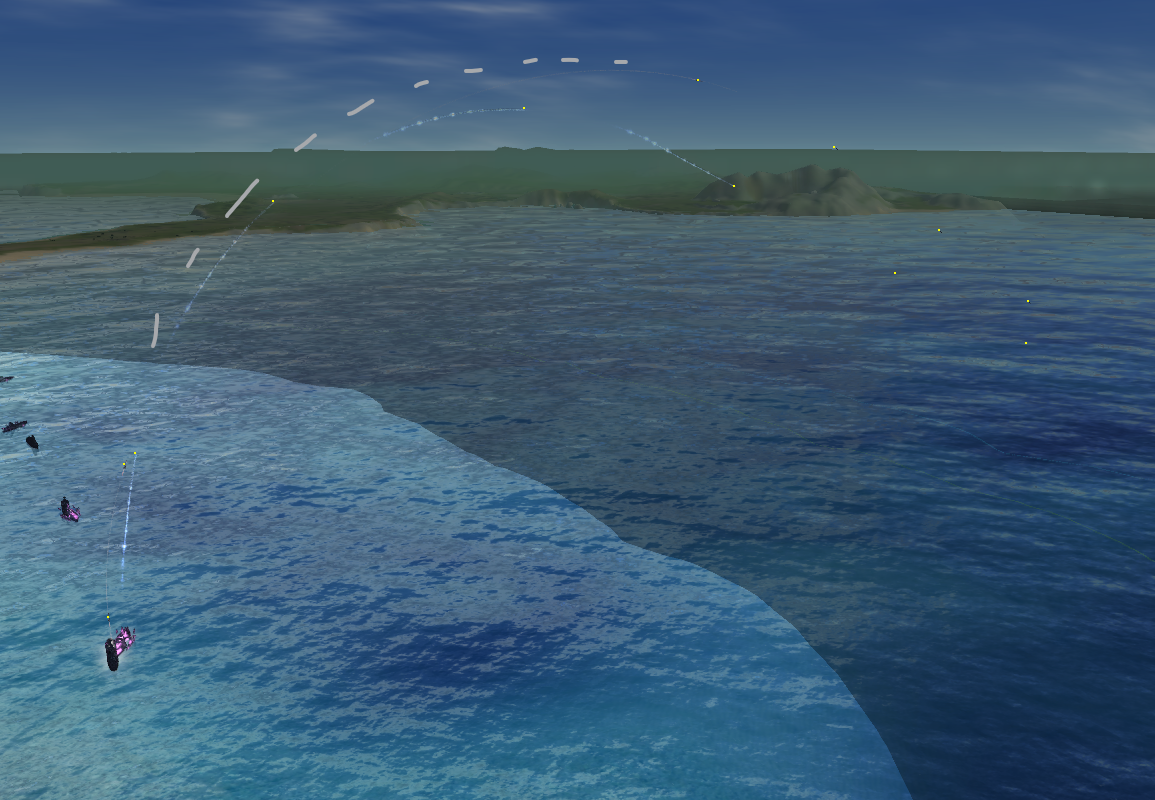 Yep - that is why this is a balance thing too.

What does that mean though? Is that 1ms over a 30min game or is that 1ms per tick? Per second?

That is per tick - apologies

It would be pretty cool if cruisers could pick low or high arcs for missiles. Low arc: Missile flies up for a second then turns straight to target. High arc: Missile calculates turn rate on launch needed to follow semicircular trajectory.

It's not huuge, but considering those are the situations where speed improvements matter the most it certainly is significant.

I'd say thats very much an improvement worth implementing.

@Askaholic It is a bucket of water - every drop counts. If we find 10 of these type of performance gains (ambient sound is another) then we have 5ms - 10ms additional time in a tick. I'm probably not going to take on this issue myself as it is not that hard to do. But it would be a nice beginners issue for someone who has not touched the code yet, is not able to analyze the code himself yet but does want to contribute.

If your computer is fast enough to process everything in 90ms, it's a 0% improvement

If there's an air fight and it takes 400ms to process all the info, this wouldn't give 1% performance improvement. Saving 1 ms would be 0.25% improvement.

Since it's normal for seton's to slow to -1 or even -2 if weak PCs are involved, even outside of air fights, saving 1ms per tick would end up saving 1 second every 1000 ticks (100 seconds) so ROUGHLY it could save 1 second every 2 minutes. If my math is right, for a 30-minute game, it would save about 15 seconds, or for a 60-minute game it could save less than 1 minute of real time. But that's assuming you constantly have 25 cruisers out. So really it would only save about 30 seconds of real time 1 out of every 10 games.

Not a bad thing, but definitely not worth "breaking" the balance. (Of course it remains to be seen whether such a change would even be a bad thing for the balance.)

Good point. Unironically: we need to make sure this wouldn't break Astro Craters.

It's not MY map, but it's a very important map to the community just based on the amount it gets played.

I think also those people (craters folk) don't keep up with the balance patches so they will be surprised when they make cruisers and it just doesn't work.

Certainly cant be picky with performance gains, like @Jip said every bucket of water counts towards better performance, plus like Jip & Sprouto said it's not one big change that fixes performances its hundreds of changes like THIS, that fix the performance.

Yes but hundreds of changes that each break a little part of the game (like the ability of cruisers to shoot over the mountains in Astro Craters) would add up to a lot of damage to the quality of the game.