This topic has been deleted. Only users with topic management privileges can see it.
last edited by
0
D
darkym

Not to mention that 'important' mass reclaim is often hidden/mixed in with other almost/virtually useless props, so I'm not sure it would actually be on the same level as manual reclaim. If you're not sure why you aren't winning try reaching out to coaches.

I've almost never seen a 500 rated player attack move to get reclaim, 99% just ignore the reclaim altogether. What makes you think that changing the attack move button for an area command reclaim button will make them take the reclaim all of a sudden?

I see this as something that could be useful not just for reclaim but more generally
e.g. instead of needing to select a group of bombers, and then shift-click on every enemy in an area before using spread-attack, you just click the 'attack area' button, click to drag over the area in question, and they will randomly target any enemy in the area (at the time the command is issued, so it's a 1-off order).

Similarly with engineers they would randomly reclaim anything in that area, and keep reclaiming until the area is cleared of reclaim.

I'm sure implementing Area Commands in FAF would do great for retaining new players such as myself. And more new players = longer and healthier lifespan of the game. New players have no chance of matching the high APM of old veterans who got used to the outdated UI - putting them at a tangible disadvantage simply because they aren't fast enough at clicking rocks

Im not sure why you think that this is an issue.

As a 'new' player, I was very sad that FAF did not have area reclaim, line move, area split attack, and more QOL move types that Zero-k and BAR had, but I was willing to shrug it off because the game is over a decade old. Some people may not have made that compromise.

What is BAR? I cannot google "BAR Game" and get anything relevant.

I remember being blown away by how good the command and control features of FAF were, though before this I played Star Wars: Galactic Battlegrounds, so having air transports assist factories and moving patrol routes already placed was mind blowing... in 2007.

@TheWheelie
He probably sees it as an issue because he misses those features from other similar games and thinks he would have more fun if they were implemented here. Seems reasonable.

@Jip
Would it be possible to implement some sort of "order limit" of like 50 per tick or something? Then all the mods that reshuffle orders would have to dole them out over time, not slowing the sim horrifically.

@maudlin27
It seems like what you would ideally want is some kind of "Area of Operations" command system. Where you designate an area and then things follow out orders within that area without leaving it. Like you plop down a few points and give an order of "Clear the reclaim in here" or "Move around and fight stuff but don't leave the area" (Fixing air patrol issues, lol)

There is a tradeoff with manual reclaim, attack move, attack move from fac, and patrol. Some require constant engie babysitting, some require apm, some give engies more freedom at the cost of them not making you aware they’re idle.

If you add area commands you entirely eliminate this part of the game because it’s strictly dominant. The only thing it doesn’t destroy the point of is attack move from factory which gives engies more range.

This does not add more decisions nor improve micro potential like advanced target priorities does and so I fail to see how it improves anything except give dudes that think they lose because they "can't spend 150 apm on clicking rocks" one less excuse.

you can ignore what i said i went full psycho 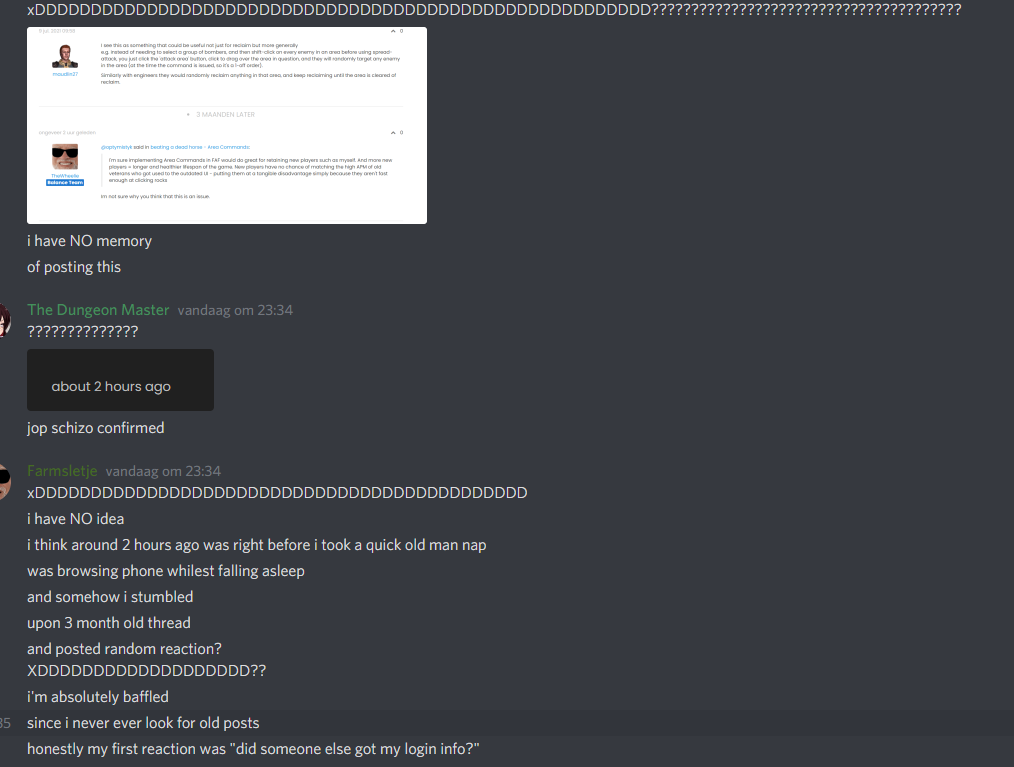 I feel like TA based macro RTS is supposed to embrace a UI that allows the player to do as much as possible in terms of simultaneous unit control. Additionally, I feel like factory attack move is almost always the optimal play when possible, and if not, normal attack move. You almost never see manual rock reclaim past the very earliest stages of the game.

Things like dragging an area to build mexes in, line move orders, etc. are sorely missed coming from games like PA, BAR, and Zero-K. My understanding is the only reasons FAF lacks those things are technical reasons. The only thing FAF has that these other games don't is being able to drag and drop already placed orders, which is admittedly useful.

FAF lacks them because it doesn’t want to implement them.

That's not entirely true. A huge problem is that the engine doesn't really support them, so we would need ugly hacks that cause performance problems to implement them, if at all possible.