If I am not mistaken AIs are not that well versed with naval battles. I'd say it needs to be a bit higher than a multiplier used on a land-based map.

@jip
Thanks Jip, true most AI are not very good at Sea Battles yet.......
But RNG is probably the best at sea maneuvers,
and will be used on 'most' of the 20x20 water maps.

Will probably increase this AIx a little after testing it again.

Thanks for the feedback, and I encourage any players who playtest these maps
to also leave their feedback here.
Whether relating to AI strength, map bugs of anything else on their minds.

Here's how the maps will be presented: 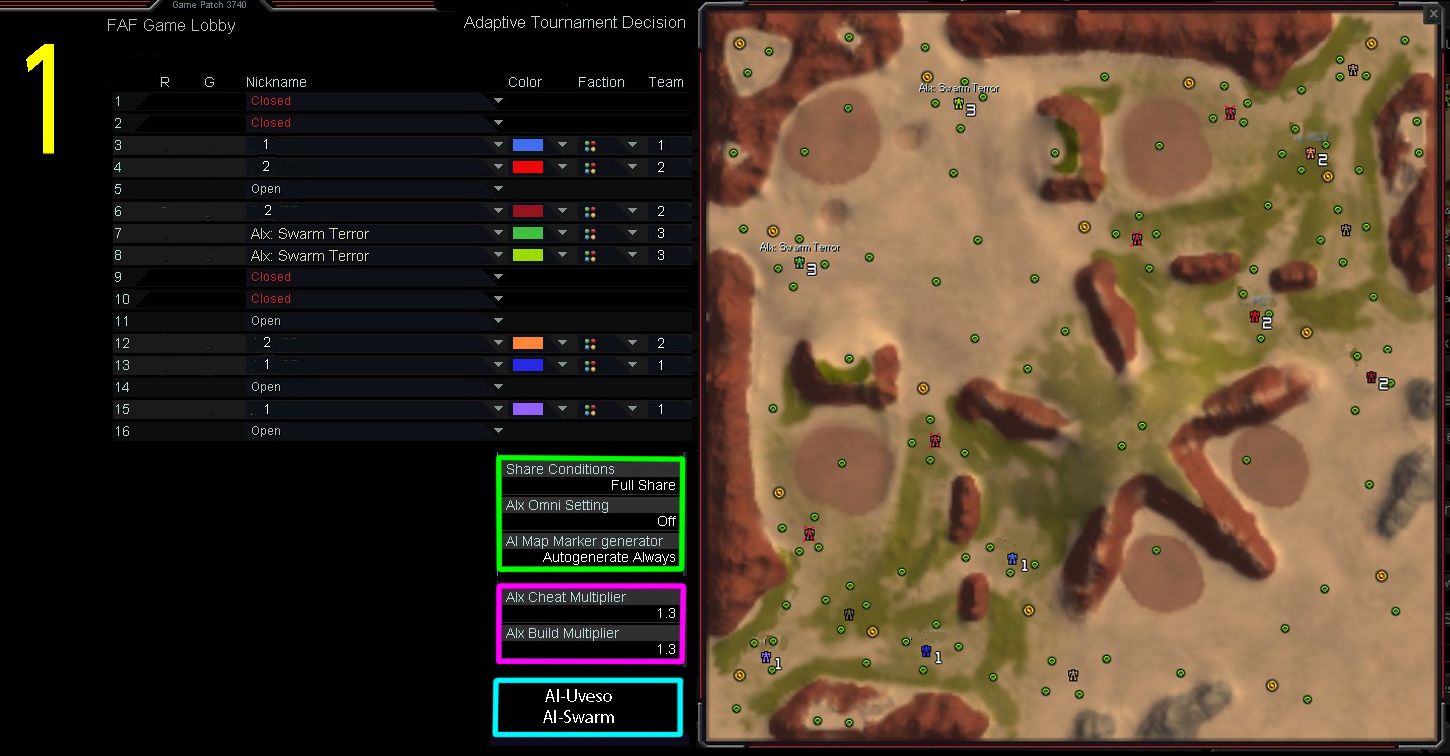 .
Maps will be uploaded to the main RCV tourny thread here:
https://forum.faforever.com/topic/4033/rainbow-cup-v-3v3-1-800-1-2k/6
.
Remember though, that AI positions and AIx factors may or may not have changes
done on day before actual tournament.
(but... Expect them to either have an additional 2 AI's added to each, or an increase of the AIx by at least a 0.1x factor 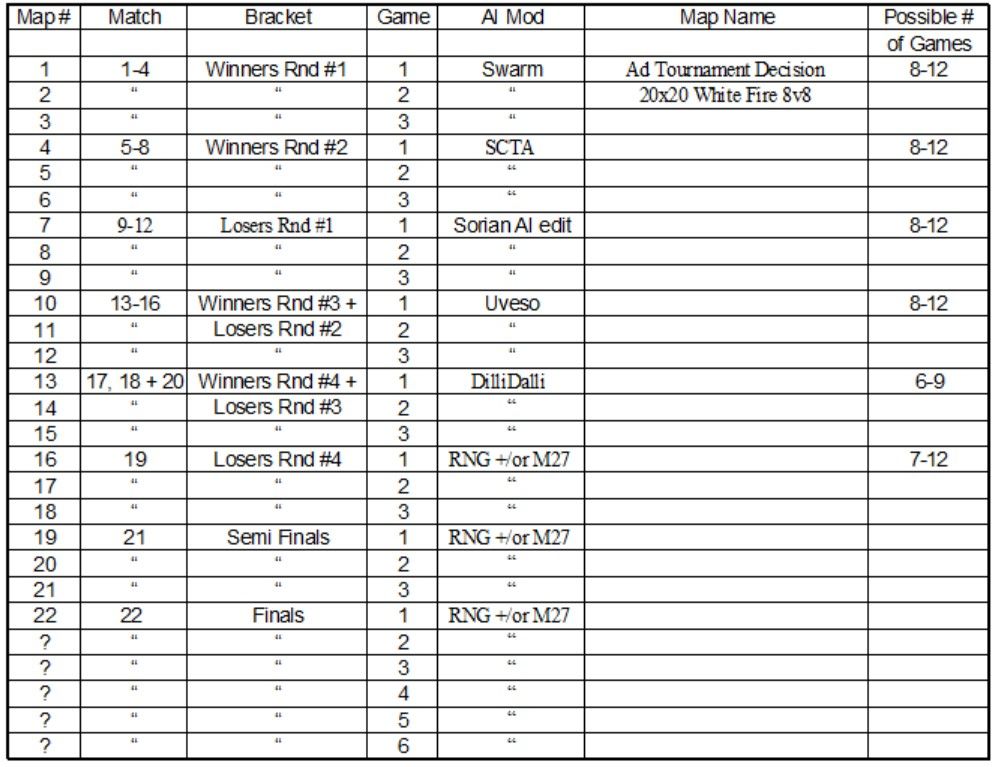 So even though RNG and M27 will have less "total games" played individually,
they will end up with the "most" air time.
(since the last 3 rounds are all most likely to be cast)

The other AI's will have to check the vault replays, to check out
their majority of games played, but not cast.

So far only 2 maps have been chosen and displayed in the table above.
If any Dev, believes the maps assigned will not preform properly,
please let me know,
thanks

above table has been copied to post #2 at top of thread and will be updated there.

Will replay IDs be posted as the games happen and/or will games need to have a specific title so they can be easily located in the vault? Eg as there’ll be a few days between losers round 4 and the final day if any issues come up in that time for M27 there’s a chance I could do something to fix them ahead of the final

@maudlin27
No one took note of the Tourny game ID's during last couple of RC's,
although "most" did put "Rainbow" somewhere in the title.
But...
For this tourny, I will go back at end of each day and write the Id's down for each match.
and Make a list of ALL the games played with ID #'s included.
It would be hard to do during the tourny, as it is very busy time trying to help players get lobbies set up correct, update the Challonge brackets and answer players questions.

As far as "updating" the AI mid week, during the tourny, I don't see any problems.
Will just have to remind the game hosts to update during the semi finals.

During RCIII - Swarm was updated mid week and hosts tried to cast a previous weeks game while waiting for the Final days matches to start... and
they had to re-install the "older" swarm version to get it to work.

Here are the maps I am considering for the next 2 RC's.

I put in spreadsheet with map size and type for quick reference.

Any AI-modders who would like to change a map already picked out for the RCV,
can substitute out for any of the maps below. 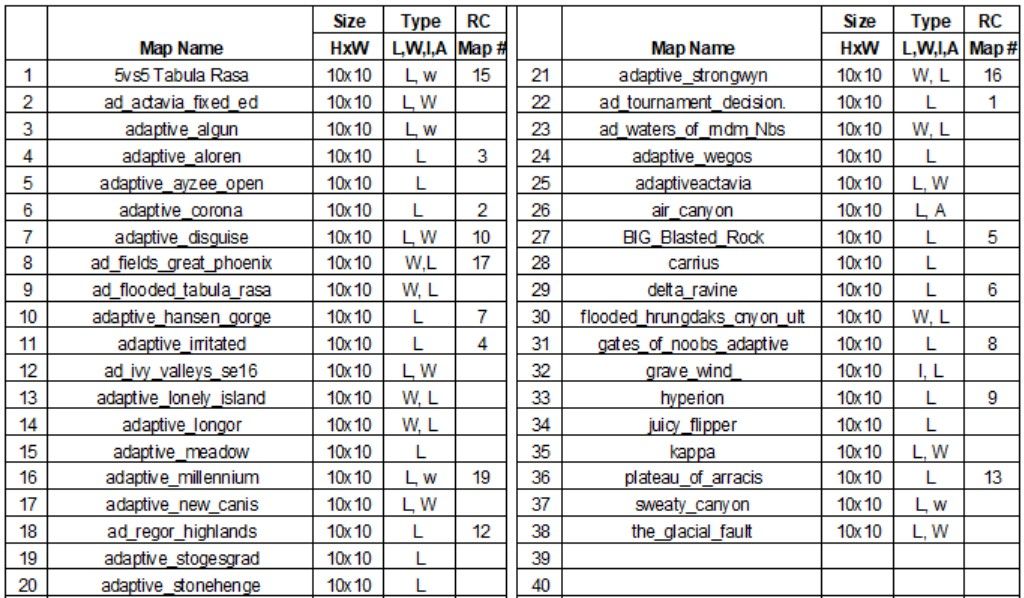 I was originally going to mix RNG and M27 in the
3rd games of the Losers Rd 4 and Semi Finals bracket, and
then in the later games of the Finals,
but..........
I've decided to skip any scenarios planned for mixed M27 and RNG games.
So All games in the last three tournament brackets will be
-either "M27" or "RNG/Uveso" games, but not both.
(will discuss combining AI's again for the next RC)

Here is the current map table: 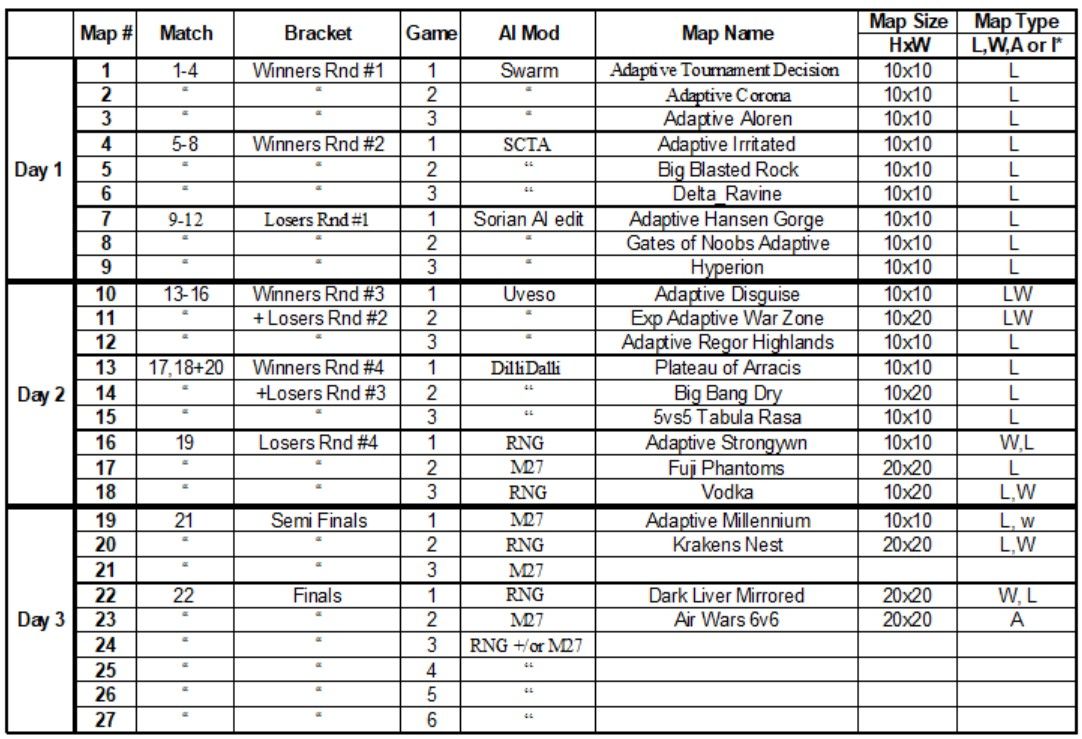