So Postal lost to Swkoll 4 to 0. Congratulations to Swkoll, hope our viewers watched it. I'll be doing an update tomorrow evening. And here is the major things to expect:
Code Cleaning has happened.
Naval has nearly finished its second round adjustments.
After these last adjustments be looking at the Spreadsheet for R3 Adjustments
Additional prep will begin in earnest for next set of exhibition games and tournaments. The game Tournament is tentatively set for Middle of January and be once more be a 2v2.
Be making new factional avatars as well. Or well TA Face Avatars. Or more specifically they will be designed to fit in as such.

Todays updates:
The final refactoring of factory code is now done. It might soon be time kill the hideflare function after all these years.

Okay: Final update barring major bugs, balancing issues until after new years. Then be one last patch until the next tournament. As of today, all major intended features of FAF are in SCTA.

A psuedo engi mod esque scenerio. Most notably. Furthermore there is some other aspects as well been worked in and done. But today’s big update is Auto DGun! Additionally DGun has been rebalanced slightly its now about 800 energy and the Decoy Commanders 1500 and has gotten several buffs.

A TA Commander with Energy to maintain will put out similar dps vs enemy commanders similar to a Supcom GunCom but less range. Additionally damage vs structures and experimentals has been greatly increased.

So this week/today update includes a few Evolva Models and also being next week update unless bugs or balance issues are noticed. Next Sunday at 11AM EST, the exhibition game, between two of SCTA own playtesters. F-Odin of GB, whose achieved 2k in global and consistency in 1850+ in ladder, vs a former RTS pro who has come to Supreme Commander community only this year, Se7ven, alongside Harzer won the first 2v2 SCTA Tournament.

These games will be casted by own of FAF's Councilor's Jagged Appliance.

In these exhibition games, Se7ven will be playing a TA Faction, using the tricks and knowledge he has gleamed or gathered against F-Odin playing a Supreme Commander faction. Perhaps even playing his Seraphim, and the newly buffed Selen.

A couple bugfixes and reworks:

ARM Warrior got reworked a bit. To be better.

Hydros got a BT Increase to help with Hydro rush.

This weekend update or this week update is up now. There were some changes forgot to do, but the ARM Commander by Balth of Brewlan, is now finished and uploaded. It also contains several Volva portings done by my predecessor Axle. And a couple other unit replacements. Now SCTA only has 80 or so building lefts to replace.

Once done so the Tech 1 engineers have there Tech 2 build suite unlocked. Enabling you to build Advanced Labs. These are are costed around 33% more than a Support Factory.

Unlocking T3 requires a tech 3 upgraded plant to be built. Which will unlock tech/level 3 for TA Factions. Or once 20 minutes of game time has lapsed. And the Hover and Seaplane Platforms are costed similarly to Tech 3 Support factories.

SCTA has an AI! Thank you to Relentor created of RNG. SCTA now has an AI. It is fully functional for what it is intended to do. It is similar in conception and functionality to Dilli. Its mostly T1 Land spam. But it does tech up.

We have now AI Support for SCTA, these are some examples taking from a quick game I did earlier today. You can can see a few our newer models here as well. Additionally the TA Building Shader in action here. Then of course one of the more most recent additions, was gonna to be shown off last SCTA tournament but alas it couldn't be, but from Balthazar of Brewlan: 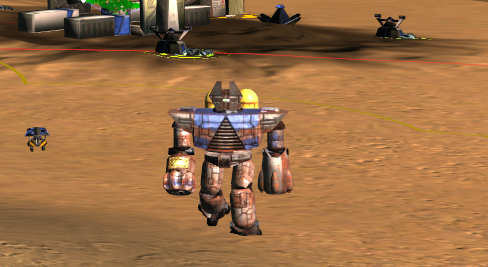 They have also done the Pee Wee and the Spider. But now the big news for next week. The next SCTA Show Match will be a neat treat. Our own OzoneX, creator of the FAF editor and long time contributor to our community. Will be on Stream with a legendary man from old days of yore: 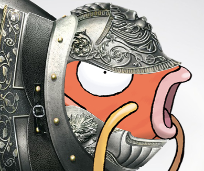 Armoured Fish! Armoured Fish had done quite a bit for the Supcom Community back in days of GPGnet. You'll recognize his name from TA Music Mod, and he was also the one responsible for creating the TA building shader in use by SCTA. He similarly made the original building shader used by Nomads and is responsible for porting the TA sound effects in the SCTA Mod. And Armoured Fish maintains a program called Mappy which is a map editor for TA. The topics on stream will range from expectations of mappers from a mapping program, to the process of creating shaders. As well comparing the mapping process, and of course some good old analysis of gameplay, how TA and Supcom differ.

JaggedAppliance will be casting the stream starting at 2:30 PM EST on the 19th of February. The show matches will take place on streamers choice map, a map chosen by our other special guest, and map by the Supreme Commander Representative. But the last match played (if finished) will be on the SCTA Revised Gods of War, made by our own creative councilor, Biass.

The other guest of honor will be TAG_Rock, an older from GPGNet, and a TA and Supcom pro.

The player availability depending we might have a special treat for everyone at the end or later that day.

So today update or week. I had alot of small revisions or fixes thanks to Rock. A few bug fixes and a new factory model. Couple big things however is several TA Energy costs been reeaxmined. And several been increase or decreased. Solars get a small mass cost increase (90 to 120) to try ajd promote building Winds more. Mostly been a cross board reduction in energy costs for SCTA

Tomorrow SCTA Update; some bugfixing, a little bit of rebalancing of course some new models. TA E Drain mechanics have gotten reworked much of the code has been improved overall. A little fixes here and there nothing major.

Only 30 models left, not counting ones that were commissioned. And join tomorrow for glorious SCTA gameplay testing on the discord at Noon EST

Today update, mostly minor, a rework of scta engi mod (again). I might have one more rework to go until I am happy with it. Otherwise some pretty basic things.

Today I released an emergency bugfix and included tje change meant for next week because the Mine Layers won’t be renabled for SCTABalance, instead the FARK and Necro have both gained the ability to build the mines.

SCTA Mod is now uploaded for the week! we have a couple new things. ANOTHER reworking of SCTA Engi Mod. Through now it is finalized and unlikely to be changed again in the future. The next SCTA Show Match is official! And with a banner courtesy of Phong.

This week we'll be seeing the likes of Postal from Total Annihilation replays face off again Swkoll this time. https://www.youtube.com/channel/UCLavjsigQSOmg3q62ckLKVA
Guests include two famous modders, the creator of TA Zero, Vohvelieläin and, Balthazar the Creator of Brewlan. Alongside discussion of various environments modders have to plan and build for, there will be discussions of moddng process itself. And today's showmatches will focus and highlight on high economic enviroments using Crazy Rush and Metal Worlds.

This week update out, a couple fixes here and there. Some solidly major updates, in other areas. Mostly a bit of improvement all around will be trying to diagnosis in the upcoming weeks why core over arm is when played by ai can cause sim issues

SCTA is updated for the week. If any errors occur let me know. The upcoming showmatch this be the first time casted on faflive, will be between the Mighty Bully. And the upcoming 2k Raider.

Next SCTA Event 2v2 Showmatch with Archsimkat. And casters TBA. I will contacting SCTA Showmatch regulars as well shortly