This topic has been deleted. Only users with topic management privileges can see it.
last edited by
0
S
SpikeyNoob

I have been contributing my own time and efforts to the community since 2014. I do not plan to stop making maps, hosting events, helping people when needed, and plenty more.

As long as FAF exists I will enjoy playing the game with people here and building it. And as someone with a family and tough job as an engineer, I think that says a lot.

We already have a councilor role for this?

Which one are you talking about?

We already have a councilor role for this?

Which one are you talking about?

You’re talking about the role that needs to keep track of events in faf and promote them to a wider audience?

No im talking about stuff happening inside FAF and between FAF people. Promotion councillor is for outwards communication.

@ftxcommando
FTX, you have been dismissive and shut me (and numerous others) down so many times that it almost baffles me that you would think it happened 'just one time.' You've shut people down so many times that there have already been several examples of you being dismissive and shutting people down in this thread alone... I brought up my 'polling in the news' idea as an example of an idea that you derailed with your influence as PC (with your typical toxic dismissiveness), despite it not being something that you had the overt power to stop.

As shown in the public news-posts-requests channel on the FAF Promotions Community Discord: 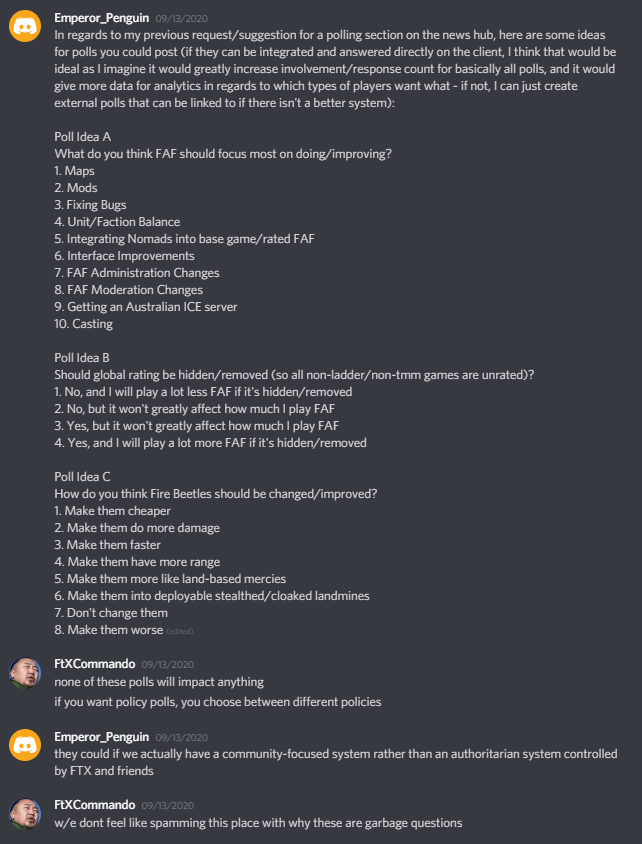 FTX, in regards to your tournament system being frustrating, you can say what you want, but there is still an unattractive amount of bureaucracy/hassle involved, and I know people (myself included) who wanted to host tournaments but didn't because they'd have to deal with you and your system to do so (and your attitude is very undesirable for a lot of people). With an easier system or a nicer more cooperative PC, the idea of organizing tournaments is a lot more appealing.

FTX, I am normally active on FAF/FAF-related things most days; I actually play FAF and make things for FAF (code/maps/etc) in addition to using forums/discord/etc. By comparison, it looks like you post on discord/forums more (but also more rudely/dismissively), and it looks like you haven't even played FAF in the last 3 months... Further, I am not one of YOUR trainers, but I do train people. As I've said, dealing with you is often unpleasant.

In regards to an example of power abuse and censorship: 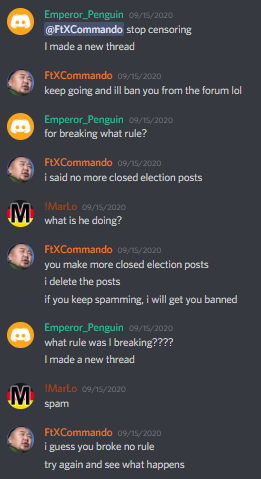 Now, does that mean polling to gather input is bad? No. But it also doesn't mean it's the solution to every problem. Nor does it mean you need a Council position entirely devoted to it, particularly when there is no real authority to give out to the role that makes any sense.

I don't see harm in introducing a position that focuses entirely on gathering information from players, whether it be polling, chatting, or whatever means necessary.
This councilor would be the pulse of the FAF player base and provide valuable input to other councilors to drive their decision making. I don't think this will take away from any singular vision of FAF the current PC has.

I won't comment on the details about things that FtX did or did not to the liking of some people, but it seems to me that there are two key areas that people are unhappy about:

The bottleneck is obviously manpower in the form of TDs. I encourage everyone that wants to improve the problem, to explain how they want to acquire more TDs. Or even better, to just start doing it. If you want to host some yourself that is also great. Generally I have read a lot of more or less vague statements that people want to improve the tournament scene, but I have read no feasible solutions.
I don't see why LoTS would have an impact on what other tournaments get hosted. I also don't see how electing a chief TD would change anything. Also I don't understand what benefit voting on this bring? Just pick any with decent TD experience, if you want to appoint one.

Splitting this off of the PC was already mentioned, but we need a concrete proposal what exactly that guy would do, to see if it is feasible. Also I am not sure who would be suitable and able to explain to people why their idea is not ripe to be implement. Because let's face it, that's the vast majority of new ideas. Most of the balance takes of lower rated players will not be considered, because they fail to consider the drawbacks of their ideas and most other suggestions are either already known/worked on, technically not possible, or made without considering the drawbacks again.
So this position would all in all not be really rewarding to do.

(Also anyone can start doing both of these anytime. It has been said so often, but I will say it again, because nobody seems to bother adressing this point.)

Let me iterate on my definition.
The new position would be expected to maintain a pulse on the FAF player base so the other councilors can rely on them for accurate and useful information. So from this I would say my councilor definition is slightly different, someone who doesn't necessarily have authority, but has responsibilities they MUST fulfill.

The issue here is people don't think FTX are fulfilling that well enough, he's being dismissive, he's a brick wall to talk to, etc. I'm sure you've read it all.
So either he steps up addresses these complaints, someone else is voted in, or that responsibility is delegated to someone else via either a councilor position or via FTX (which I don't think he will, correct me if I'm wrong here FTX)

Does that give you enough detail for you to provide a less snarky and more constructive response?

I don't know what more information there is to gather. Seems like FtX has gathered a lot of information about what map pools people want, what tournaments people want, and figured out how to increase activity at all levels with league and division systems. Most people have bad ideas so they should simply be dismissed. Most people just play FAF and don't think about how it can be improved and do not have the knowledge to know what should be done, so there is no reason to ask them. Even if you did ask them the developers only work on what they want anyway.

There is a lot more information to gather... With you being 1 of the 23 total people with 1800+ 1v1 ladder rating, I can understand how you can feel well taken care of by FTX, ThomasHiatt. He focuses too disproportionately on select parts of FAF while disvaluing much of the much larger community, with its thousands of lower and mid-rated players. Also, low rating does not automatically mean disinterest or low-quality opinion in what's desirable for playing FAF. In fact, the 13 1v1 ladder players with the most 1v1 ladder games are all below 1300 rating and have more than 6500 ladder games each, according to the leaderboards. The vast majority of FAF players have <1300 rating.

In regards to what more information is there to gather, there can be surveys/polls/open-minded discussions on tons of things beyond what FTX does. I literally just made a post about 2 hours ago in this very thread that listed some dated poll ideas. There are numerous other things to poll and otherwise gather more data on, such as more holistic map pool preferences, tournament desires, transparency issues, and player retention-related ideas, among many others...

And how did you come to that conclusion?

@randomwheelchair because morax is interested to sponsor noob tournaments. FtX most of his time spends on the top player tournaments.

Good to know that only othe player councillor can host tournaments

To voice my personal experience regarding the candidates...

When I entered FAF, I clearly remember the FtX dude with a mongolian icon answering all my beginner questions on #gameplay-and-training channel

At this point, I didn't even know that I should ctrl-K to quit, but Player Councilor FtX helped me. He was the guy that was always on the Discord chat answering questions. No matter how thoughtless or obvious the answers were, FtX is there a great deal of the time answering questions.

That's a guy that cares about the community because HE IS in the community. Before this election, I would have never had an idea of who the fuck is Francias, Morax or Emperor Penguin.

I know FtX isn't some saint but god damm he does a good job, I prefer having a hard working dude that shows up than some randoms appearing out of no where promising me to make FAF perfect and magically change everything for better (but only IF they get elected).

Waiting to hear @FtXCommando reply to this... then I’ll respond to other posts.

The thing about being PC is you work with what you get. The nice thing about not being PC is being able to choose what others get from you. I do not intend to give to those that did not reciprocate. Those that collaborated with me can always count on me when they need me. Call it a gift economy.