This topic has been deleted. Only users with topic management privileges can see it.
last edited by HarzerNoob
2
H
HarzerNoob

If you ever played a semi high level setons games you know that when you and your opponent go for the chill game approach it will end up in a huge t3 navy battle. with battleships pounding each other for more than 10 minutes ingame time. Also micro helps a lot as you can probably dodge 50% of the incoming damage. In combination with the simspeed slowdown late game setons navy becomes sending battleships in circles for 20minutes realtime (and cycling shields). With occasional eco management/scouting. I really don't enjoy this. And here lies the important point of this suggestion: I know a lot of people have perfected the t3 navy micro stage and some enjoy it a lot. But I also know people in the 1700+ range who share my opinion and try to avoid t3 navy all together, because they dislike the way it has to be played. What is the opinion of the majority?

The reason why t3 navy is so slow lies mostly in the slow movement speed of battle ships and the very low dps/hp of battleships. First it takes very long for a battleship to reach the front line and then it takes very long to kill another battleship. And to top it all off the power of retreat is very strong because there is a lot of mass in the reinforcment stream you can retreat into. So the frontline has to be pushed very slowly when having a superior fleet.

The best adjustment to make t3 navy more exciting would be to decrease bs hp and inrease it's dps. In current balance battleships have the lowest dps/hp of any surface naval vessel. 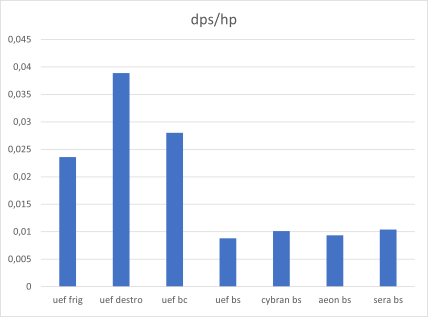 By increasing that ratio the killtimes between battleships would decrease and therefore decrease the time you actually have to micro your navy but making that time count more.
Bringing Battleships a bit more into the glass cannon regime would have some impact onto other units as well though. Shields would become even stronger in navyl, torpbomber more effective, bases would fall faster after a navy crush.

The perfect example for a fun navy unit is the neptune. It makes a t3 switch actually capable of winning the pond fast. As has a comparatively high dps and is fast.

I find the t3 navy micro super annoying and boring, so my preference would be to increase muzzle velocities so dodging is less effective and micro becomes much less important then, but effective dps still increases so battles don't last as long. My preference may be atypical though. To some degree making battleships more of glass cannons would make micro even more critical, though at least the battles would not last for so long, so I have mixed feelings about that idea. Muzzle velocity changes would have less of an impact on the rest of the game though, which might be better because then we don't have to consider torp bombers and land bombardment balance. Also, especially on setons, t4s going through mid would become less viable if bs dps is buffed because bs outrange them and would be able to kill them faster. Not saying I think that's better or worse, but it's another impact. I also wouldn't have a problem with about a 10% movement speed increase for battleships.

Reducing the importance of dodge micro would be a good thing, because I don't find dodge micro particularly interesting. There could be other types of micro we could be concerned with, such as positioning the battleships if certain angles give more DPS than other angles. So instead of microing your battleships to dodge shots, you would micro your battleships to be facing in the correct direction based on what you know about the enemy fleet.

If battleship guns get faster, you could make them more maneuverable and they still wouldn't be great at dodging. Or you could make them less maneuverable, so that maneuver micro becomes more important and you have to be more thoughtful/strategic about where you send battleships. There might be an advantage to having a fighting force that is mostly destroyers/neptunes because they would be so much faster.

I am generally in favor of the OP. 25 percent damage buff and 50 percent hp nerf would work well. (Battleships tend to shoot more often than they are shot at because of their long range, so it shouldn't be necessary to buff damage by as much as hp is nerfed.)

Im not sure if i like the idea of nerfing battleships hp. Im my mind, a battleship is supposed to be both heavu hitting and heavily armored, so making it a sort of glass cannon just doesnt sit right with me. However, maybe the solution would be to just increase the dps in a way that battleships kill each other more easily while at the same time being still very durable, specially against smaller ships. The problem with that is that it may make battleships more powerful against other types of ships as well, althoug they are already so powerful and expensive that it might not make a difference.

Ya that's another game mechanic I just hate, and I would say should also get fixed rather than worry about muzzle velocity affecting it. I think you should be able to groundfire Harms, (and maybe atlantis I guess?) but groundfiring subs seems about as broken, counterintuitive, and contrary to a well balanced game design to me as the 1% built t1 radar blocking a tml. It's one of those things that can work very well, but takes some apm and attention to do, but to me just shouldn't even be an option to counter subs. I still have memories of one time losing t3 subs to a horde of groundfiring t1 bombers because I didn't micro them for 5 seconds. Just ridiculous.

@corvathranoob It would be nice if buildings had zero volume until about 25% completion. They would only start to grow after 25%.

While it had no volume, if any unit was standing on it, you couldn't build it. If an enemy unit was standing on it, it would lose health (and of course it wouldn't stop an enemy from walking through it or dropping from a transport onto it). That would make it much harder to block an ACU or a drop (blocking a drop of course is not legal, but that doesn't mean we shouldn't fix it. It's better to take away a cheat than just to punish people for doing it.)

It would be nice if buildings had zero volume until about 25% completion. They would only start to grow after 25%.

That would be a terrible idea

@tagada
I don't have a problem with buildings blocking shots generally, even under construction buildings, just blocking tmls with them. I know this was discussed long ago and is only a very rare team game issue so I don't want to dive too deep off topic on it. But groundfiring t2 subs is quite common. The ONLY time this might make sense is if a sub was surfaced, and is targetable for a few seconds while it dives again. The game is based on sci-fi fiction, but that doesn't mean we shouldn't try to keep things as consistent with the laws of physics as possible. And if people ever want to boast about the projectile physics simulation aspect of this game, groundfiring subs many meters below the surface makes no sense.

To me, the game plans for specific tactics and strategies, with counters to them. TML-->TMD. SML-->SMD. Subs-->torpedoes. If we want battleships to be able to counter subs, there should be some specific weapon they have that is meant to target them, like depth charges or torpedoes. So instead we end up with less strategy and instead more micro emphasis, which I think slightly detracts from a real time strategy game. This makes it a little closer to SC2 and a little further from what makes me love FA.

Valki
This post is deleted!
Reply Quote
last edited by
0

It's not exploit, not to mention that it should stay in game as it's quite good skill expression. The only thing that really suffers from it is atlantis.

@randomwheelchair I never said it was an "exploit," I said it was a bad game mechanic. If everything you can do through micro is "good" because it demonstrates "skill expression," then anything that saves any clicks ought to be eliminated. According to your logic we should eliminate infinite build queues, patrol orders, attack moving, hotkeys, shift-queueing orders, etc. But that would be incredibly stupid.

Something was changed with the CZAR no longer killing ASF.

That actually would be possible and I never even thought of it. Submarines could have an armor type that protects against everything except torpedos.

RandomWheelchair
This post is deleted!
Reply Quote
last edited by
1

The question is whether there is somewhere more fun to put apm in giant navy fights, not extrapolating that being able to groundfire subs = you hate the idea of build queues.

Like by the same slippery slope in reverse you can just accuse the people that want to do this to also want a button that tells your units to automatically dodge enemy projectiles.