This topic has been deleted. Only users with topic management privileges can see it.
last edited by
3
T
Th3-11

Just fyi. I quit ladder few years ago after the map pool became huge.
My feeling was that bo whoring was more important than general game knowledge.
And It was just too many maps and bo to learn to be good.
So a map generator, with no perfect bo possible, would probably take me back to ladder.

I don't think rng maps need to be vetted manually, they are generally so good. Just throw em in ftx.

Overall from looking at the tourney maps, I think it's nearly decent enough for me to be interested in doing a separate 1v1 queue. I mainly want to work some more with Sheikah to make the 10x10s more varied in structure first as I think over half of the 10x10 games in the tournament followed a near identical template for the map size.

I can agree that 10km need some more variation. From the tournament today I am pleasantly surprised that the 20km were well received as I was worried they would be terrible.

With regards to the 10km I think that the hills/ramps can be reduced in terms of their slope so that there is less terrain issues. Additionally with trying to find more structures for the maps as FtX mentioned. Of course that all happens the fastest with more feedback and ideas. So feel free to suggest.

5kms are probably in a similar place as 10km a little bit although there I did try to add some special cases not make it all open all the time but needs to be looked at.

I personally can't get over how good it is. in the tourney, not a single bad map.

I would rather see this implemented than 90% of the maps chosen.

Wanted to stay out of this because I do think Sheikah's doing some good work.

Think there is a lot of the classic FAF "It's new so it's amazing" syndrome going on. This cult of worship has constantly burned the community in the past.

Thought I might compare the opinions of players when it comes to author/generated maps. I had a map from a long time ago that looks something similar to a generated one, so I thought it would be interesting to look at. I scrapped the map idea a long time ago, so don't expect it to release.

Here is a picture of the spawn, dont mind the GPG editor ui around the edges, i'm in a rush.

Already don't have to tell you that most players wouldn't want to play this map in ladder. Why? well:

etc, etc, etc. This map is a couple of years old and would never be played by the community. Don't need to tell you that. I'm on the ladder team and would probably give this a 2 or less asthetic score at best.

Here is the generated map I took this map from, I like to think you're all smart enough to have known I was lying from the start:

I had to remove the decals from my changed copy because:

All I did was fix the lighting and make all the textures the same size. I can't really do much to the water because the ground is so low that there is no space for you to hide the 3 "layers" of water underneath, This is another critical flaw in mapmaking. I still refer to this as the "Tokyto special".

Anyway, you get the point. If these generated maps were user made, the community wouldn't even be giving them a chance.

I do think the mapgen is cool because i've been sick of BO whoring for a long time. This is just your reminder to check yourselves. Keep refining this generator and be hesitant to force it onto the playerbase, and I think you'll eventually have a good product.

Also Sheik, after looking at this lighting setup, would rather you stopped taking Emperor Penguins advice on how to make maps look good. I've no proof that he made this, but i know he made some "biomes" and whoever did this one needs to be castrated. My dms are open.

Thanks for the feedback biass. I am continually working on making the terrain more readable. And honestly after staring at so many of these maps for so long I really have started to dislike how the "ramps" and slopes are textured so may start looking to change those going forward.

I think progress since the mapmaker was publicly released has been huge. I'm hoping experienced mapmakers and high level players get a bit more involved with this project now that it's been brought back into the spotlight by the recent tournament. If I'm not mistaken, Sheikah had put out a call to mapmakers for help with the look and feel months ago, but I'm not sure how much attention it got.

I understand that inclusion in the ladder might pose some technical issues but I think they're worth investigating. Random maps are very noob friendly compared to regular maps: no meta, no specific builds - a level playing field. If the long-term goal is to encourage people to shift to ladder rather than custom games, ignoring the map generator's potential to help in this regard would be foolish; it's common knowledge already that many people stay away from ladder because they feel it's too tryhard.

Nothing new is ever "perfect," but refusing to give it a try means there will be no motivation to generate progress.

I say give it a go and if it is so infuriating people leave, then shame on them.

I don't agree at all about the "community not giving them a chance" as we have to play maps like Yemkey in ladder which is quite frustrating to look at; the overly-saturated colors and brightness is painful.

Checking with you in the ladder team channel about this one for clarification but pretty sure this was not entirely on the community/team, as it was what we will call an "ulterior issue" that I personally hope to never see happen again.

Subpar maps shouldn't appear in ladder, of course. But i'm saying equivalent maps to the current state of the generator most definetly fall into the cascade of garbage, and never even get so much as looked at.

So, if I may add my two cents. I think Biass is right, how many folks would download MapGen Map from Vault if they WEREN'T map generator? It be another map in the vault played a few times by host then NEVER again. Now if may /shamelessSelfPromotion, I had Biass make a Map based on the TA Map recently (Gods of War). And had it played on latest SCTA ShowMatch Stream, compare how that map looks compared to any Map Gen Tournament?

Now I don't enough know how often Biass Gods of War will be played, but its definitely I feel map, folks would commend on its aesthetics and more. And folks would download to just look at it. But if it got put in ladder?
People would complain it frigate spam.map
Requires BO because the map isn't conducive standard Opening and has a naval focus.
Maybe Cliffs aren't saliently walkable cause many looked kinda jagged despite being so

And if we see that map on a stream? Like Gyle or otherwise its definitely a map people will talk about. The stream itself had a person talk about the Waves Biass did. Or compare the red to even a standard Supcom Red Map like Theta or Sytris. I love map gen and use it alot but that because when I play with my friends vs Ai on sundays and need a 20 by 20, 4 v 6-8 AI Map Gen provides reasonable map I don't need to troll the vault for. But for something like ladder?

Ladder should showcase our community finest work. And inarguably MapGen can be considered a fine work by Shiekah. But it should never replace Author Maps. Because ladder is one of the few places quality work is actually showcased, because otherwise its endless DG/Astro for days. /shrug my two cents

I agree with that the results are astounding - as it is hard to generate reasonable maps from scratch. Can only applaud to @Sheikah and other people that helped it along for achieving this result over the years.

I don't entirely understand the discussion however. I think the primary idea is to have some form of rank / ladder for generated maps.

I understand that you don't want it to merge it with the two current ladder queues because they have a specific goal in mind. Generated maps may clash with this. But if it'd be completely separate of the typical ladder queue's then I don't see why we shouldn't embrace it if and only if it is technically possible.

A friend of mine told me yesterday that he still plays Age of Empires precisely because of generated content. Every game is fresh up to an extent. Older games (AoE and Settlers) used to have generated maps quite commonly and it really keeps the game going because of the novelty, casualness and weirdness it can introduce. I'm confident it can and will do the same here.

I'm biased because I really like the map gen But a couple of the maps the mapgen made for me in the tourney are maps that I'm very interested to replay as-is.

In fact if anybody knows how I'd like to know.

here's the replay link : https://replay.faforever.com/13909802 it generates the right map. I just want to be able to host it.

@tatsu It would be easy enough to test. Just take a mapgen map, give it a new name (something catchy like "Winter Duel"), don't upload it to the vault (because that's against the rules), but host a custom 1v1 on it, call the lobby something like "all welcome."

And we already know that about 85% of TMM people would rather play basically any mapgen map than play another 2v2 on Forbidden Pass.

@biass: I respect your and other people's work as mappers (hey I've made maps too, remember), and I think you have some excellent maps like Aalhaven and Choir and Flagellant that are certainly above mapgen quality, however I do think most mapgen maps stand above (on their own, without the factor of novelty) a lot of maps that are included in map pools. At least in terms of my personal preference.

(with all I mean all that I've played so far, I'm sure there are some broken seeds out there)

On top of this some of the mapgen maps have been some of my favorite new maps (we grinded 1 map for about 4 games in a row with Arch yesterday) that I'd choose over maps like Twin Rivers anyday.

Maps like Open Palms, Rusting Iron Roundel and The Ganges Chasma are unrivalled by mapgen currently imo (in their respective mapsize categories).

@tatsu there is a place to insert the name of a mapgen in the generate map ui. Place the name there and you will get out the same map.

? Most map gen 10x10s are hill in middle with 2 mex and/or reclaim that you walk everything into and then 2 3-4 mex expansions u secure with pd then ignore in favor of giant smashfest in middle since map is wide open plain and if you win middle you can attack/defend everything.

I'd say basically every 10x10 you mentioned in that list has more diversity in gameplay than map gen.

My problem with map gen is I don't want this: 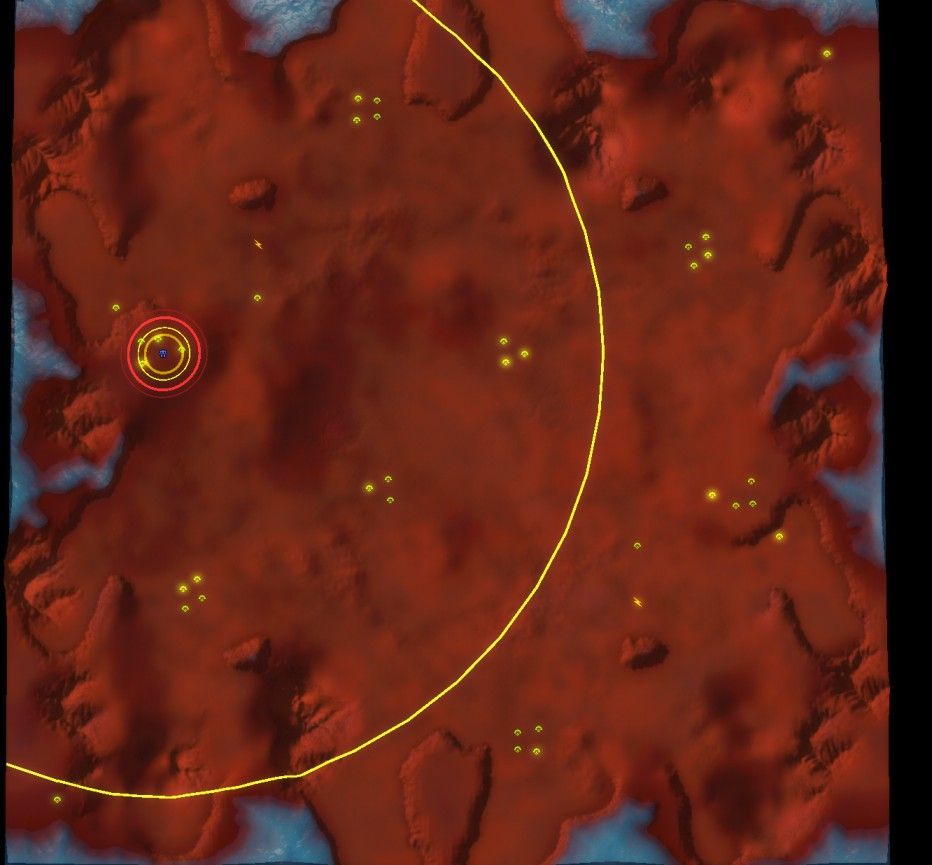 I want this to be the average map from it: 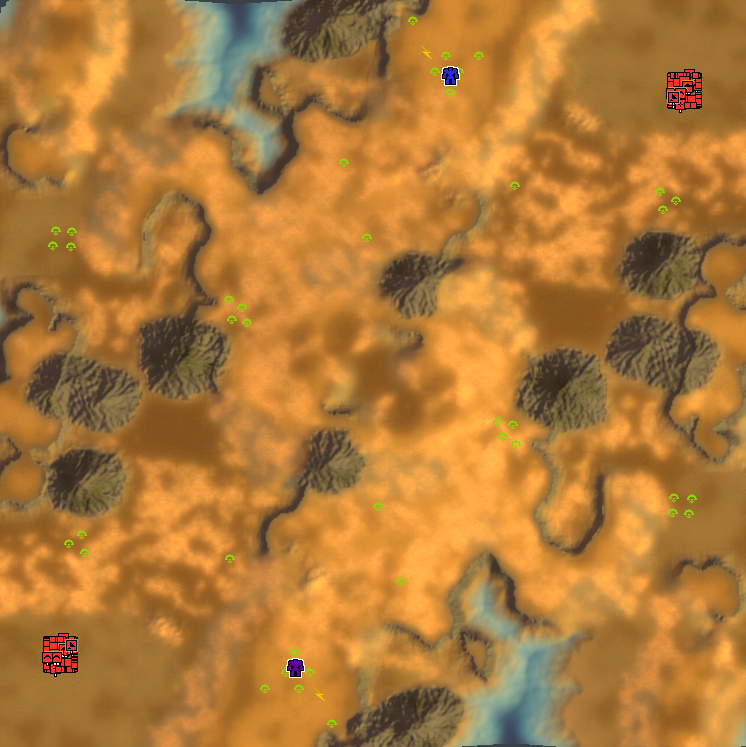