Thanks for this amazing tourney, @Sheikah ! I'd be very willing to play something like this again.

It's unbelievable to bear witness to how far the map generator has come, none of the maps in the tourney were objectively bad.

One that I played, I though had a truly genius layout that could make all the different sorts of playstyles and scenarios of supcom happen, And another was gorgeous with really well fitting textures.

Not knowing (or at least partly, we do have map preview) what we'll be thrown into is a real challenge that I find incredibly interesting to play.

My avatar is blurry, who rescaled that ?
I demand a non blurry prize !

Some impressions of the mapgen after playing the tourney:

First of all, a huge improvement over the last iteration I played in a tourney like half a year ago where the maps were far from being a consideration for competitive setting. While it will never reach the quality of handcrafted maps I would love to see it being used more and get continuous improvements. I hate playing the same map in 1v1 even twice a day so this immediately brings down any pain levels from playing significantly. It also removes any BO whoring aspect from the game which is the absolute worst part of FA in general in my opinion and probably a big reason I don't play the game apart from tourneys anymore. Would be nice to see it used as a standard form of competitive play in tournaments in the future (next lots?), some things to improve on for now thought:

And ofc would be cool to have the "undiscovered" mode at some point for that authentic AoE feel and to complete the picture.

I've heard that some people didn't like the amount of random hills. I think gradual height variation is part of the beauty of supcom, they create strategic opportunities by interacting with the physically simulated projectiles in a way no other game can. However it's very difficult to identify height variation when zoomed out, which is what I think triggers people the most about slopes. They need to be indicated better.

Thanks for the feedback. With regards to the slope and terrain snafus that is going to be the first thing fixed as that was an unintentional side-effect and will update the texturing to make it clearer.

Variation
On the topic of the mex spread and style of the map. I am looking to further increase that variation and it is great to get examples or explanations that can then be used to codify or generalize the style. Admittedly the maps were currently "playing it safe" as the generator was up till now created using current ladder and team game maps as inspiration which do tend to have this trend somewhat where as the outliers were harder to generalize without being gimicky so going forward that will be a major focus. A similar thing can be said for the starting resources which would be great to have more variety but was playing it safe initially as already people are upset without a hydro occasionally ha.

Decals
The decals are a tricky bit. Currently they are more or less randomly placed with each biome having a set of decals to use. The idea of placing decals based on the terrain is one that I am hoping is not impossible as I fear it might be just due to the limitations on computation time for actually placing them.

Map Preview
The previews currently are not rendered by any actually rendering software like the manually made maps that use the GPG editor or FAF editor. The renderer is actually a poor mans renderer that is coded into the generator it self which is why the images are such high contrast and this will hopefully be improved in the future.

Here's badlands, in general a map where a lot of approaches are viable from hardcore t1 all in to eco turtle and t3 rush, a lot of people like the map because it allows for big variety of play and doesn't punish early game mistakes as much, be it bo related or not. 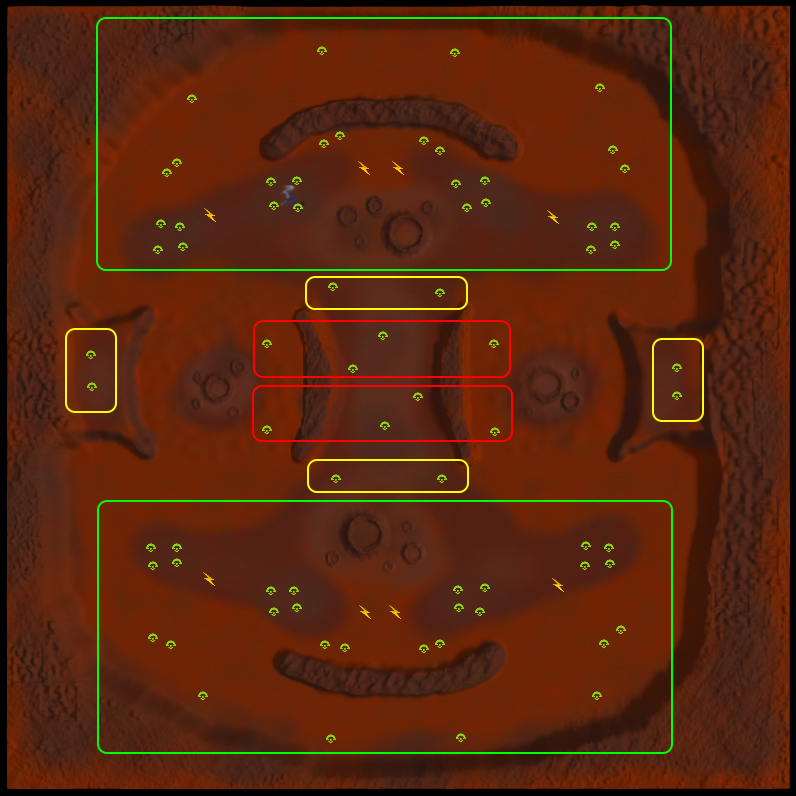 From a quick count I see it has 28 safe mexes, 4 greyzone mexes and 4 highly contested mexes per player. It's a very heavy tip in favor of safe expansions. Now it doesn't mean they are always easy to get and will never be raided but you generally won't ever lose them outright but will only get delayed. This plus a moderate reclaim amount and the majority of games on badlands reach t2 and t3 stage which is more than a lot of 10x10 maps can offer, and it's by no means a turtle tech map.

Here's palms, another classic loved by most people 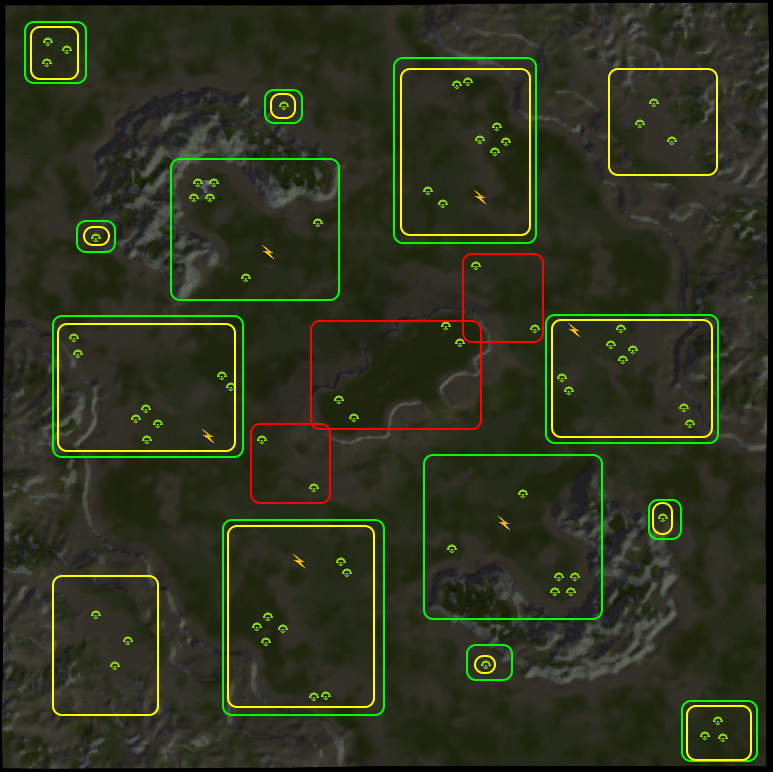 As you can see again overwhelming majority of mexes are clearly defined expansions that are closer to one of the players by a good margin. However due to how open the map is it is very easy to sneak units by and raid so none of the safe expansions are truly safe, this just generally leads to more aggression compared to badlands but overall I'd say the style of the game is shaped by how hectic the early game is and again it could become anything from t1 spamfest to an ecowar into t4.

Here's hollow, an extreme example of the opposite style. 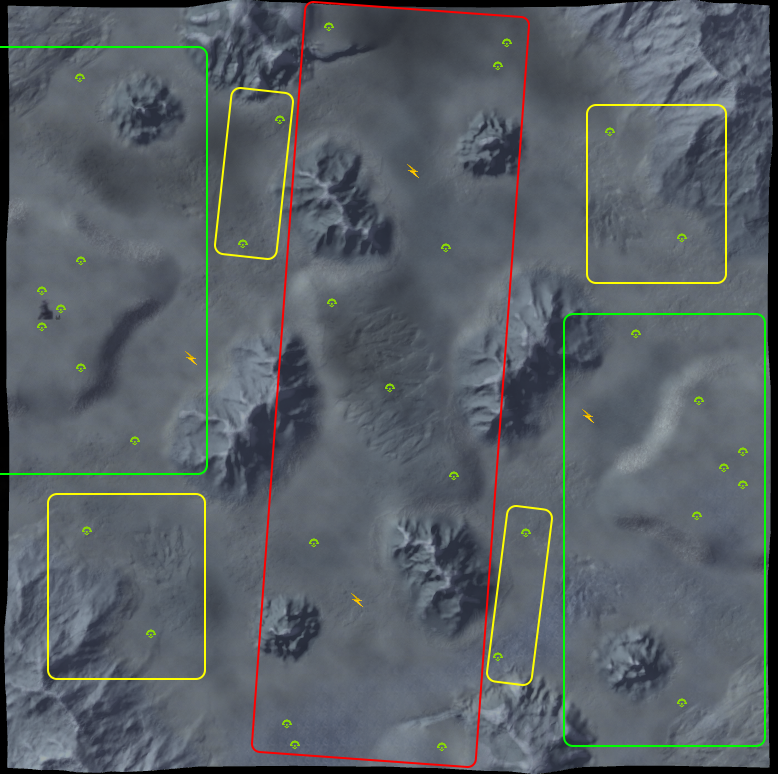 I see 7 safe mexes, 4 greyzone mexes and 5.5 contested mexes per player. A staggering difference from the previous maps. Majority of games on hollow are hardcore t1 spam where a small BO whored efficiency advantage or a small mistake in raid defense are what often decides the game and the snowball is usually very hard to stop. This is just due to map control being absolutely crucial as a huge portion of map's eco is highly contested. From what I've seen from the games I played in the tourney maps generally lean towards this style. Personally I hate these kinds of maps but it definitely should not be abolished either, I'd rather see both styles and anything in between and further on the extremes, ideally weighted towards more tame solutions in general.

I agree 100% with petry, it's a concept I recently talk about a lot too in regards to maps. Imo the best maps are ones where almost all mexes (if not all) are clearly distributed between the players, while remaining vulnerable to raids. Eg. Badlands and palms with huge open areas behind the base makes raiding viable even though the mexes are clearly on one player's side of the map. The maps that I made in the past had clear issues with this which I've learned from, like eg. Vulcan's reach with the 4 way symmetry making 2 starting bases totally contested

I agree as well, if you have too high % of mexes highly contested it usually leads to very snowbally games, once you get control of those mexes you can just sit on them and wait for your advantage to grow so much that enemy can't do anything anymore. Over all I think that maps with high number of highly contested mexes can be good too but they shouldn't be a standard.

Thanks for the descriptive images and analysis. I think previously I had been worried about maps being too turtle heavy but that probably biased it too much the other direction so I appreciate the feedback and will incorporate it.

I'm not sure how often people are playing 1v1s on 4/6 spawn maps, but that's probably part of why Palms and Badlands are so good (Petric perfectly explained why these two are my equal favourite maps), and the mapgen can create that pretty easily. You could turn the mexes (and maybe reclaim) slider(s) right down to avoid having an obscene amount of mass.